Pulp of the Week - Tomorrow Now 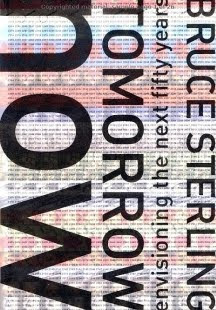 This book is a fascinating look at our possible future circa 2002. Now that we are in that books future, there are a few things that seem dated, but much of the stuff here is a solid bucket of futurism.

Sterling's first chapter is about biotech, and this is really the main place that his SF roots show. In his future, there is hardly an aspect of our lives that won't be impacted by the advent of advanced biotech, genetic engineering or both.

Later chapters discuss the narco-terrorist, new world disorder fighters that are the real enemies of peace. They are sometimes of nations, but are ultimately destabilizing and destructive. The stories of three men that changed that personify this trend and fascinating, particularly the rise of power of Shamil Basaev in Chechnya. He was always about making money and made a lot in the disorder of the the Chechen revolution. Sterling calls him, "an idealistic college dropout with a minor in arms smuggling."

I was quite fascinated as Sterling wrote how a band of thieves and cutthroats defeated a Soviet tank battalion with RPGs and cel phones.

There is a lot of thought provoking material in this book. The final sections are about climate change and the disappearance of glacial ice and its implications for the future.

Sterling proposes that we are at the beginning of one of the periodic mass extinctions that the earth undergoes every few hundred million years. Historically these have been caused by outside factors, mainly meteors, comets, and the like. But this extinction will be caused by human intervention in the worlds climate.

I have never heard anyone put it quite like that before. That our actions could kill off 60-75% of the species on the planet.


I read the hardcover and give this book a 7 out of 10. There are some very good sections, but there are also a few that go nowhere for me. All in all, an interesting read.