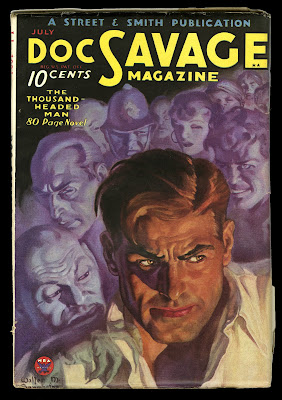 This rousing and interesting Lester Dent penned tale takes Doc and Co. to the jungles of Indo-China. The story picks up in Europe after the events of  The King Maker, with Doc arriving in London by plane. His arrival attracts photographers and autograph hounds. This is the kind of scene with Doc that we really haven't seen before. He is trying to dodge the fans and reporters. A man accosts Doc at the airport and throws a package at the Man of Bronze. Well, it seems that everyone wants the package, or at least its contents – three innocuous black rectangles the size of a cigarette pack that are said to be keys. Keys to reaching the ancient city of the Thousand-Headed Man.

Doc is framed for murder and uses an inflatable head and shoulders of himself to escape from a particularly tight spot (neat trick). He also has a secret code name with Scotland Yard - SX73182 - that gets telephone assistance without questions.

Doc and crew head to the jungle and encounter some of the most interesting scenery and ruins to date in a Savage novel. The first of these is a temple made entirely of carved hands. The others are equally interesting. The atmosphere and action are particularly good in this novel. The thrills and challenges are top notch. And, of course, there is a beautiful girl in the thick of the action. 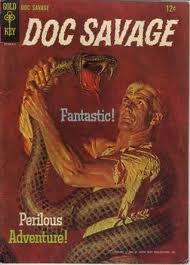 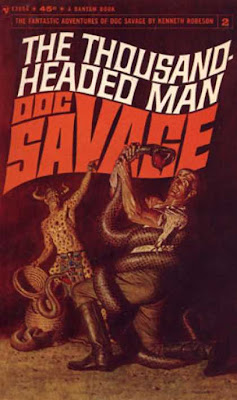 I give The Thousand-Headed Man an 8.5 out of 10. The pulp cover is by Walter Baumhofer and the iconic Bantam #2 paperback cover is by James Bama. A portion of Bama's painting was also used for issue #1 of the Gold Key Comic. The pulp interior art is by Paul Orban.

Again, it is due to the efforts of Chris Kalb that the interior illustrations are able to be included in this review. His great site is worth a visit.
Posted by Pete Miller at 10:07 AM No comments:

Roger gets a few extra tokens due to his grenade powers. He starts with two of each kind, but can not gain any more during the game. 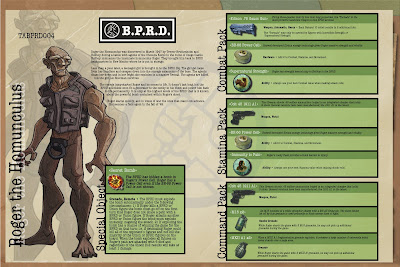 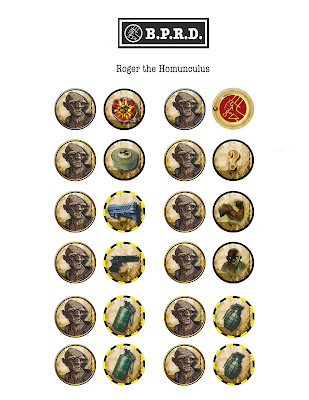 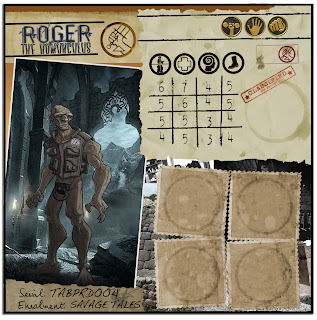 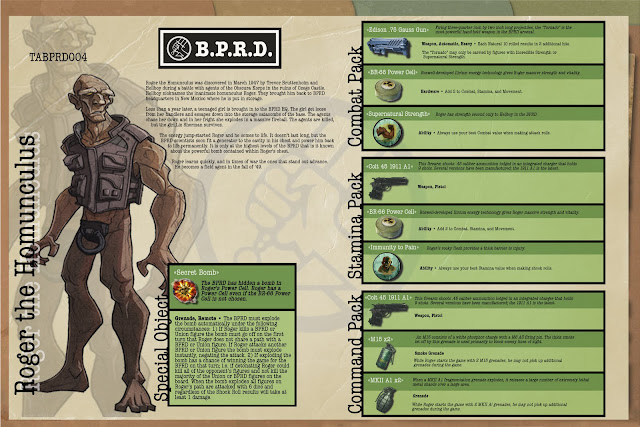 Posted by Pete Miller at 9:26 PM No comments: 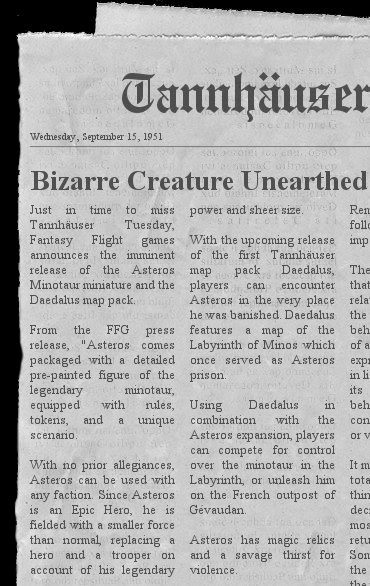 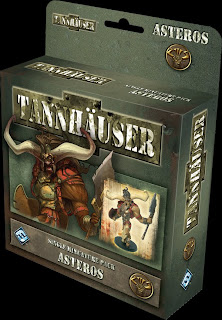 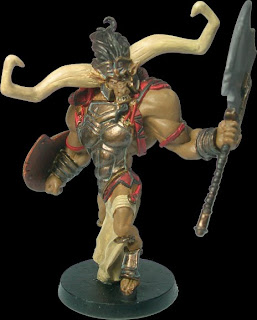 Asteros is to be an Epic Hero. It will be interesting to see what rules they used and why they chose to not maintain the Legendary keyword.

Here are some pix from the Daedalus preview I posted nearly two years ago... 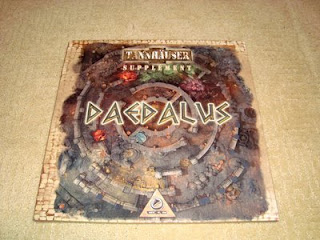 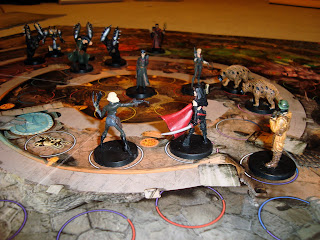 Here's hoping this is actually out soon...
Posted by Pete Miller at 3:36 PM 1 comment:

I'm working on it! I think I've posted all the finished cards and now I'm working on the new ones. These take at least 5 - 10 hours each. I'll put it up Roger when I'm done. Here are a couple of sneak previews... 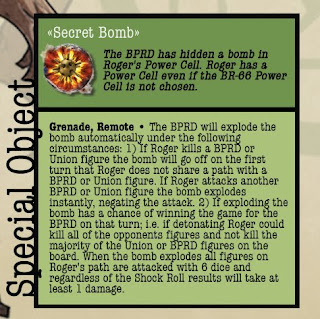 The BPRD has planted a bomb inside Roger. This bomb must detonate if certain conditions are met. I finished the bomb icon, but as you can see the language still needs adapting to the new rules. 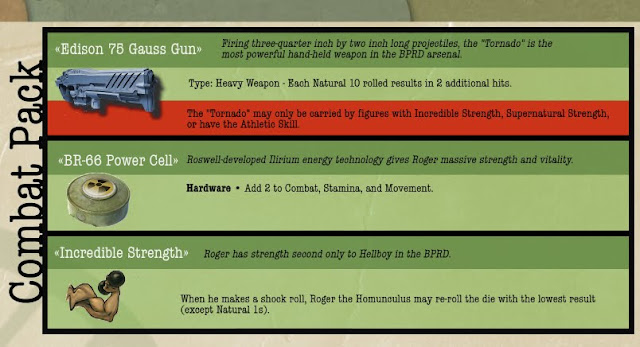 The Gauss Gun graphic is done - red strip needs to be removed and language needs to be adjusted.

The Power Cell is in good shape, only needing a drop shadow behind the icon.

Incredible Strength needs a drop shadow behind the icon and the language to match the revised edition rules.

I still need to finish the bio and finish filling in the other packs. I know all the items, but need to finish graphics and text.
Posted by Pete Miller at 3:33 PM No comments: 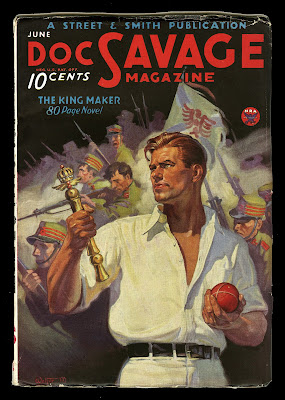 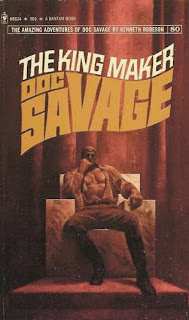 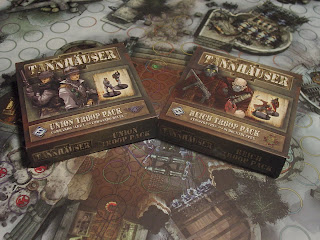 There they are. The first new Tannhäuser release from FFG since (I think) March 2009. Could that be right? Holy Moley. Well, here are the new Trooper Packs. Still looking forward to the Matriarchy Troop Pack. 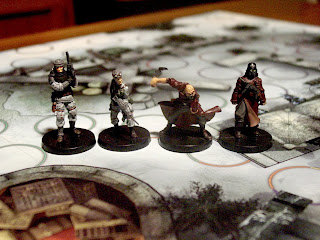 As you can see, each Troop Pack comes with 2 figures - repaints of the existing Troop figures from each faction of the original set. 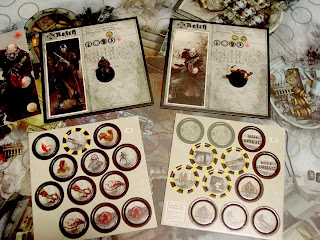 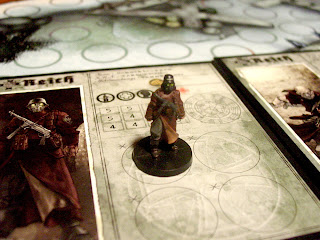 For some reason FFG decided to do away with the Iron Cross symbology on the Reich Troops and went with a more generic "Reich." 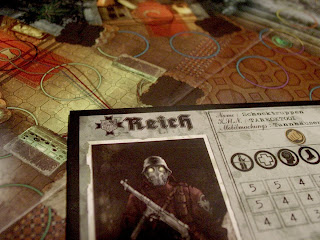 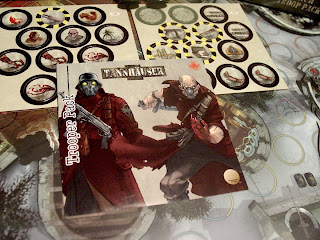 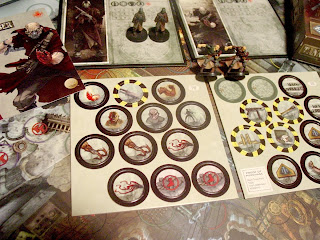 The Packs come with two sheets of tokens - The Special Object, Combat Pack, and Stamina pack are the same as in the base game, but there is a new Command Pack that comes with two of the new tokens so that you can use the new pack with your original Troops. 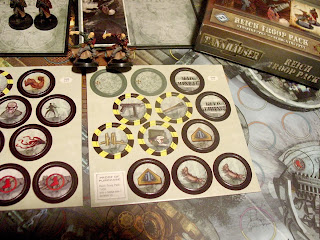 The Schocktruppen Command Pack is an MP 40 (same specs as original), a Camp 111 Badge, and a Mechanized Arm. The Camp 111 Rank (the triangle-like token above) may only be taken if Von Heizinger is on your team. The Camp 111 Rank adds a +1 bonus for each friendly figure (don't count yourself) on the same path as the Schocktruppen. The Mechanized Arm is a Hand-to-Hand weapon that lets you add two dice to all the Hand-to-Hand attacks the Schocktruppen makes and lets the Schocktruppen go on Overwatch without spending a Command Point.
The Stossentruppen Command Pack also includes 2 new tokens including a spare set for your original figures.
The first new token is the Kampfmesser Bose, a Hand-to-Hand weapon that does not take up an equipment slot. I guess that leaves room for Crate Tokens during the game - neat.
The second new token is for an Ability called Infernal Sustenance. With that token your Stoss are vampire-like - when they inflict wounds on their enemies, they heal one wound for each damage inflicted. This is especially cool considering that their Special Object adds one die for each Hand-to-Hand weapon in their inventory. Now you can load up on the enemy even more. 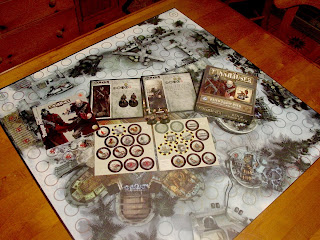 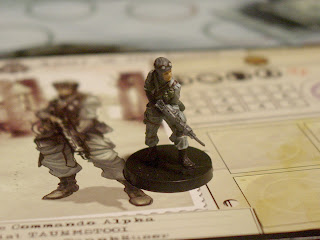 The new Union figures also provide some nice options for their player. The Commando Alpha troops get a Command Pack as well. The new tokens are a Rank and an Ability. The Ability is called Watch My Back and allows the Alpha to make a Counterattack without spending a Command Point to do so. The Rank is called Only Unit For The Job and allows a Commando Alpha that has taken lethal damage to get one last emergency activation before he dies. 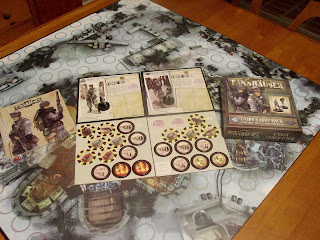 The Commando Delta gets a new token - a grenade called the AN-M11. It acts like a Smoke Grenade in all respects except that it leaves a cloud of FIRE (see the fire tokens below.) Any character that steps on the Fire path suffers 3 Automatic Successes. Fire Good. 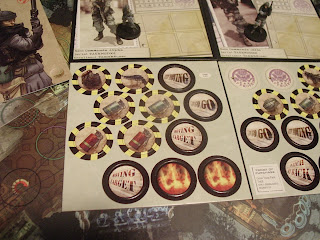 The other new token for the Deltas is Moving Target. This token adds +1 to the Delta's Movement Value and all attacks against you suffer a -1 penalty to each die rolled. These new options may also be used with the original soldiers and provide a bunch of new options in your troop makeup. They can be additional troops in your army, or provide back up if you are using reinforcements.
It is my opinion that the original figures are slightly better painted, but given the variances in the quality of painting even in the original set, this could just be my figures. 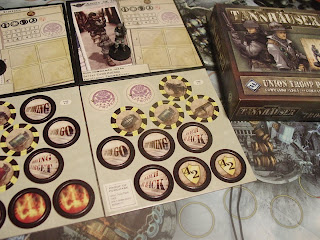 Still U-Chronic after all these years.
Posted by Pete Miller at 12:48 AM 2 comments: 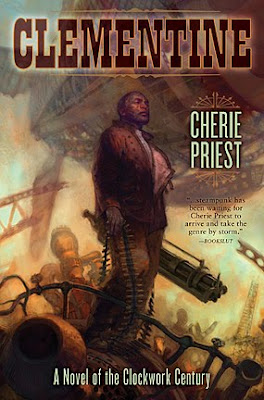 Clementine is the second novel in the Clockwork Century series written by Cherie Priest. It is about half the size of Boneshaker (the first novel), but it is a terrific read and if you have read Boneshaker, you will want to read this new book.
The next book in the Clockwork Century series, Dreadnought, is due out at the end of September so I wanted to have this one done so I can read that one when it comes out.

But this isn't much of a review so far, so here goes... Spoiler Alert for those who have not read Boneshaker. Don't read this review.

Clementine follows two characters and what happens when they meet and their destinies intertwine. Like Boneshaker, it has dirigibles, shoot outs, adventure, intrigue and a boy in trouble. But the similarity stops there, well except that Clementine is also an awesome book.

The first character is Captain Croggon Beauregard Hainey, whose airship, the Free Crow, is stolen at the end of Boneshaker. Hainey has taken off in another airship in hot pursuit. He is determined to get his ship back (even though he stole it in the first place) at nearly any cost.

Maria Isabella Boyd is a former Confederate spy who in desperation has taken on a job as a Pinkerton agent. Her first assignment is to be sure that whatever is on the  Free Crow makes it to its destination and to keep Hainey from getting his ship back.

Belle Boyd and Captain Hainey are great characters that I couldn't help but root for. Their unlikely alliance is the heart of the book and I loved their relationship as much as the ass-kicking both of these people deliver to their enemies.

What Clementine doesn't have is Zombies. Boneshaker was a Seattle story and because of the conditions there, there are zombies. The new book has plenty of action and thrills to take the place of the creeping undead. Hainey and his all black crew have to risk heading East to the heart of the Civil War where they are unwelcome by either side.

Cherie Priest is on a roll and writing some awesome pulp action. Even if you think you don't like steampunk, read the Clockwork Century books because they are big fun, full of pulpy action and awesome characters. Personally, I find Steampunk to be a weird label. I just call it pulp, or if you must  - alternate history SF.

I give Clementine an 8.5 out of 10. It is a lean 200 pages of pulp adventure. I can't wait for Dreadnought which releases on Sept 28. If you like the sound of this hurry over to Subterranean Press before they sell out. If you miss it there, it will be out in a trade paperback in 2011.
Posted by Pete Miller at 12:21 PM No comments: