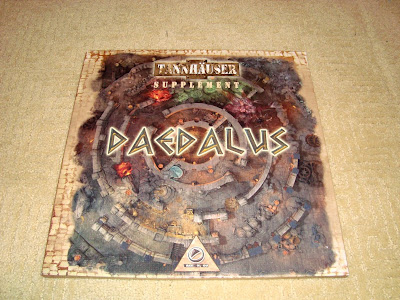 Daedalus
Yes, it is true. The newest Tannhäuser expansion is out. I got mine yesterday and had to interrupt my planned complete Moeller's Hermetics posting. That will have to be next time.

I tore open the shipping box and got out out my camera. As you will see, the map is beautiful, the tokens are plentiful and the scenarios are... well they're in french.

The Daedalus package, when still sealed in the shrink wrap reminds me of cracking open a 2 LP set more than anything. When you open it up here is what you get in the Daedalus expansion pack. A 2-sided map board (complete with a mostly useless base set catacombs), a boat load of tokens, and a booklet (in french) describing the tokens and scenarios.
There are MANY more pictures at the Savage Tales Gallery on Shutterfly. 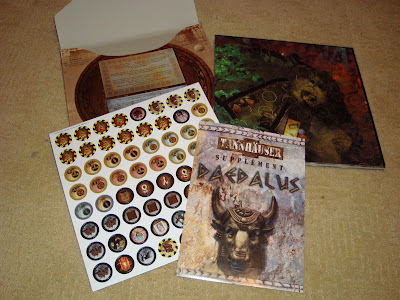 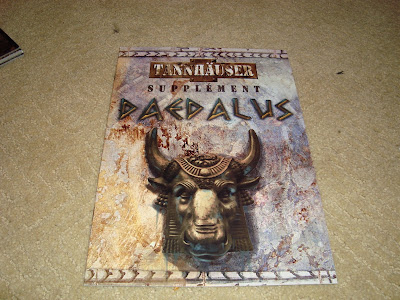 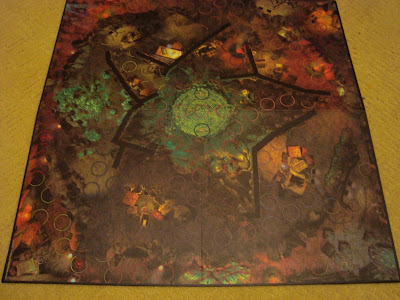 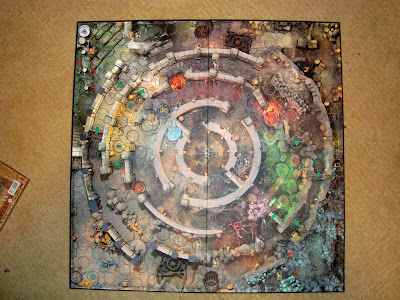 The new map has 4 entry points on it! That is awesome. It also has some new symbols on it.

This first one, the person in the red No symbol is a Prohibited Space. You can move through this space, but you can't stop there. 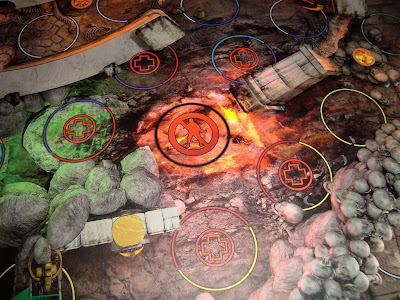 The next one is a mechanical horizontal elevator that you can summon, get in, and move around the board in. I am still trying to decipher the exact rules... 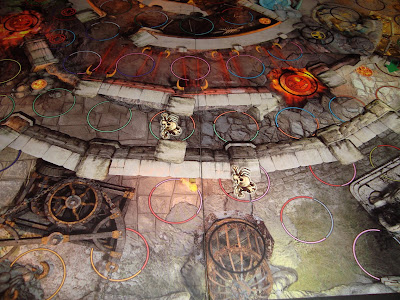 There are these green arrows on the map as well. I am not sure exactly what they are for.

As Matt has surmised in his comment, these are indeed one way circles. Your character can only pass through these in one direction. Once you step in you can only exit in the indicated direction.

Some of the circles are partly off the board. 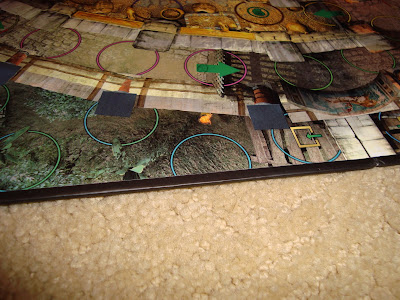 The Daedelus pack stuff fits into the main Tannhäuser box just fine. The new map is really nice and I am looking forward to playing on it. Since we do not yet have Novgorod, at least I can play scenarios that link the castle with the catacombs. 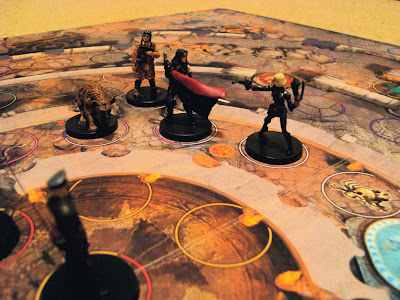 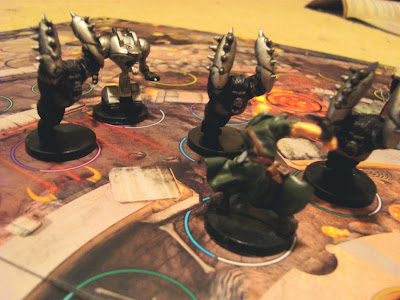 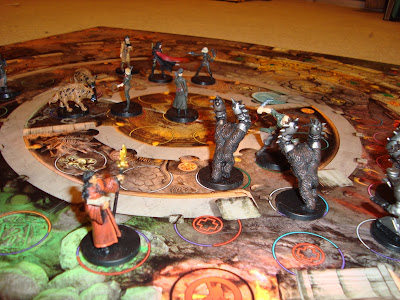 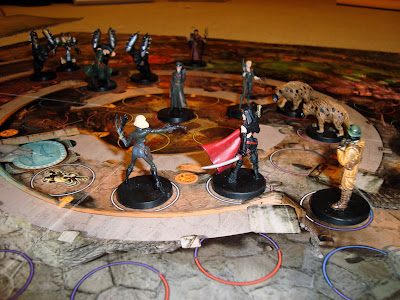 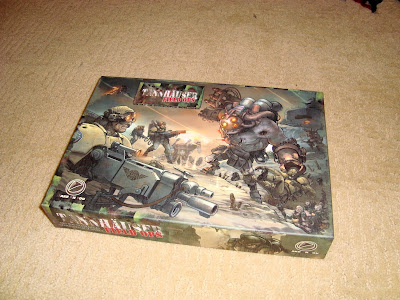 Field Ops is an interesting game, joining Wings of War and Battleground as card-based tabletop miniatures games. Field Ops has Characters and Troops and their equipment. It also has Terrain and Structures. The Character Cards themselves are pushed around the table to position the troops for battle. If the cards touch, they can go at it Hand-to-Hand. 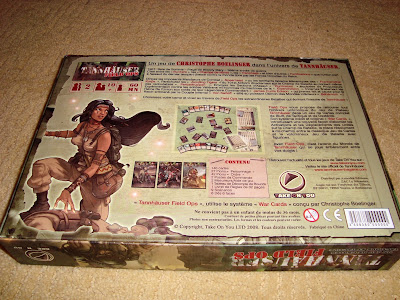 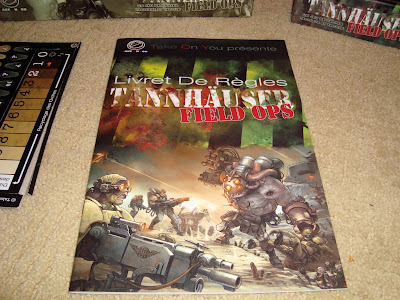 Here are the contents of the box. You can see the back of the rulebook, the unpunched token and counters sheet, dice, and two Command Posts. The Command Posts are used to track damage and to assign orders for each turn. As in Heroscape the orders are secret. The Command Posts are cardstock and a bit flimsy, and could be dented easily. They nest inside each other to fit in the box. If I enjoy the game I will figure out something to make them sturdier. 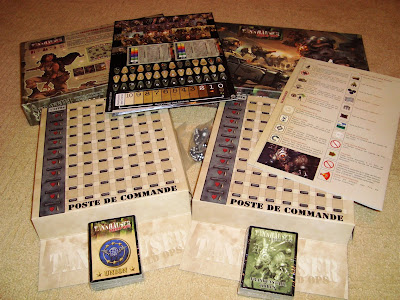 While the production value of the art work and design cards is top notch, all the cards have a burr that is right in the middle of the top and bottom edges. Since the cards are physically pushed aroung the table, I put my cards in sleeves right after taking these pictures. 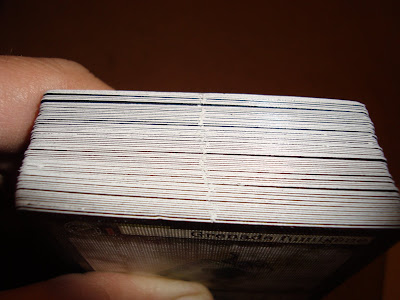 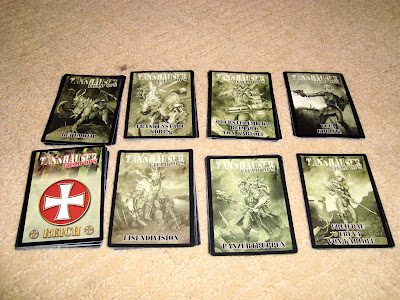 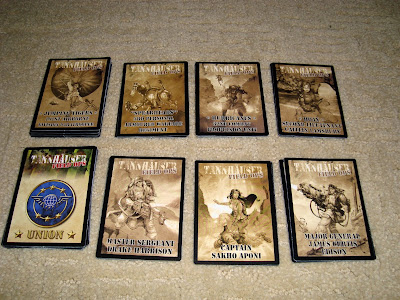 Wolf also has his own set of cards you can see at the Savage Tales Gallery.

The Heros of the Union 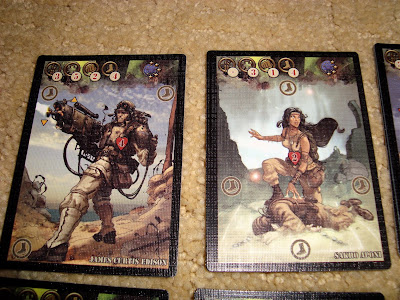 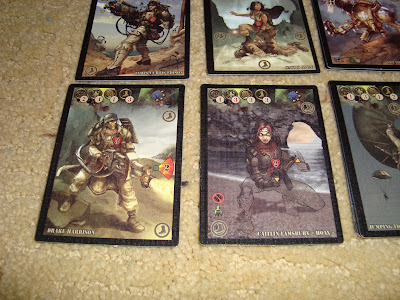 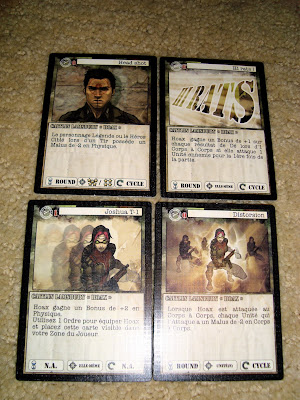 Sergeant Drake Harrison's powers. Hmmm Sgt. Drake... That has a familiar ring to it... I'm surprised he doesn't have a grapple gun... 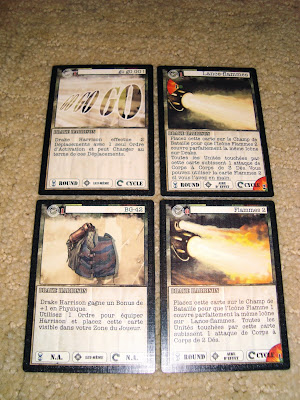 Some Heroes of the Reich 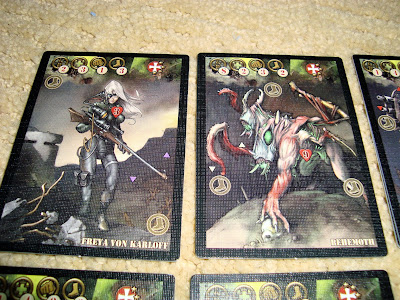 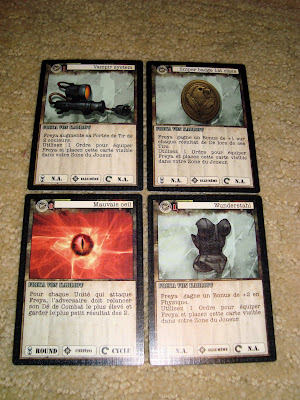 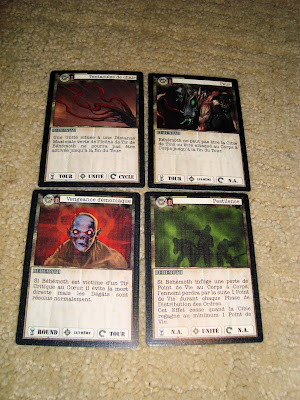 Some Battlefield condition and structure cards. 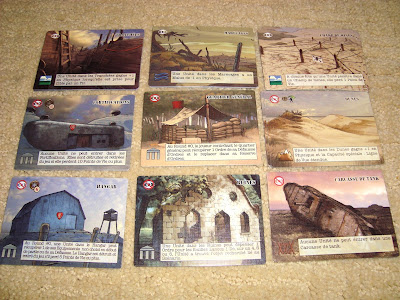 There are MANY more pictures (almost, if not every card) at the Savage Tales Gallery on Shutterfly.

Daedalus and Field Ops are going to take a serious effort to translate to English. Give the speed that FFG is releasing this, I am looking forward to a year or two of play before the FFG version comes out. People interested in helping the translation effort should chime in here, or at the FFG boards.

These games were easy enough to order from Ludibay, and they take credit cards and PayPal. I got my games quickly, but the shipping wasn't cheap... Of course they have had Novgorod and Georgi and Ramirez for a year.

I will follow up with playing reports as they happen.


My custom additions to Tannhäuser are not created by, distributed, or endorsed by Take on You, Asmodee, or Fantasy Flight. Tannhäuser and all related characters are trademarks of Take on You and © Take on You LTD. All Rights Reserved.
Posted by Pete Miller at 11:26 AM

Both items are gorgeous!

Thanks!
I bet those green arrows are 1-ways...