I'm taking a break from the U-Chronic Tokens. I have some ideas for new tokens but I'm awaiting the release of the long delayed Operation Novgorod expansion to see how certain rules are handled. This month I figured I would instead share some previews with Savage Tales readers. 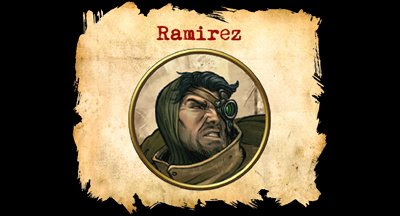 Last month I provided a translation of Gorgei Volkov's Equipment Packs. For this month I've done a translation of the upcoming Ramirez figure expansion, along with the rules for his Special Item, a gunnery drone nicknamed the Hound Dog. 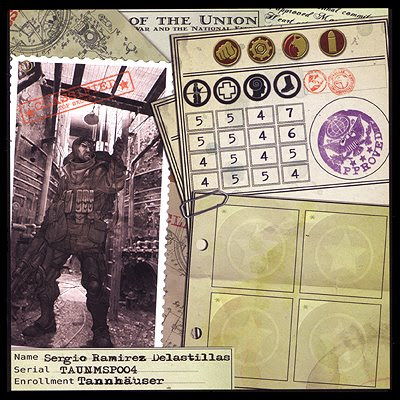 Combat Pack
• Mark 19 MOD A1
Type: Grenade
The Mark 19 He-Frag grenades do not cause a Automatic Wound and the explosion does not leave a Debris Token. The cylinder contains enough grenades for the whole game.
Requires Weapon Skill to be used.

• Bouncing Betty
The M16 is used during the Action Phase and is placed on a free adjacent circle (with no adjacent characters) on the same Path. It is triggered at any time the Union player chooses. All characters on, or adjacent to, the mine suffer 2 Automatic Wounds. A Debris Token is placed on the explosion area.

Stamina Pack
• Mark 19 MOD A1
The rules for this item appear in the above Combat Pack.

• Purple Heart
When Ramirez is wounded for the first time, one wound is automatically ignored.

• Bomb Brothers
The mobile mine is used during the Action Phase and is placed on a free adjacent circle on the same Path. It is immediately moved 1 circle at the end of each character's Sequence. It explodes when a character is on one of its adjacent circles. Every character present on a circle adjacent to the blast suffers 2 Automatic Wounds.

Mental Pack
• Mark 19 MOD A1
The rules for this item appear in the above Combat Pack.

• Corporal 5th Grade
During the Deployment Roll, the rank of Corporal 5th Grade allows you to add a 2-point bonus to the die result. This bonus can not be combined with the bonuses of other ranking characters.

• Bronze Star
Thanks to his heroism, Ramirez awards 1 supplementary Bonus Point to your unit, which can be used just like Victory Points.

Bonus Points are not exactly like standard Victory Points. If they are not used during play, they are lost at the end of the game and subsequently not counted for victory conditions. 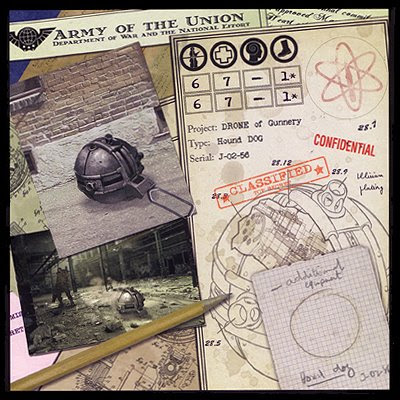 The Hound Dog may be used during the character's Action Phase. Place it on any free circle, on the same path, adjacent to the remote control carrier. Once it is placed, it is deployed for the rest of the game.

At the end of each character's Sequence, the Hound Dog may move 1 circle ignoring all Movement penalties (Modifier Circles, Debris, etc.). It does not block any character's Movement, but no character may occupy its circle.

Smoke and characteristic Modifier Circles do not affect it.

The Hound Dog has a minimum range of 3 (there must be at least two circles between attacker and defender) and the target must be on the same path. The Characteristic Values used are listed the Hound Dog's Character Sheet.

In Hand-To-Hand Combat the Hound Dog uses its lowest Combat Value and can not Counterattack. The Hound Dog can not make a Hand-to-Hand attack.

The Hound Dog can not complete an Objective, whatever the Game Mode, and it may not spend Victory Points.

The Hound Dog can not be healed or repaired during a game.

The Hound Dog can only use Area 51 equipment currently under evaluation.

The Hound Dog is not a character, so it can not return as a reinforcement.

A character needs the Engineering Skill and the remote control in order to use it. 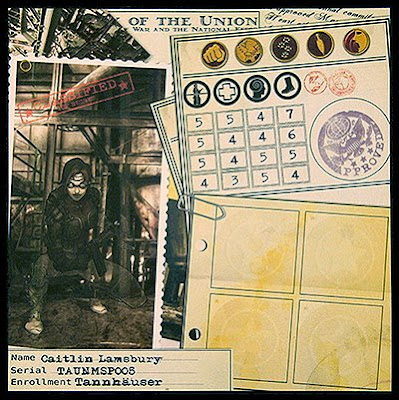 In case anyone missed it, a photo has surfaced of the next Union figure expansion, Caitlin Lamsbury A.K.A. Hoax. No release date has been given, but it looks like it will be released in France sometime in 2009. It is rumored the character possesses some sort of invisibility, or perhaps teleportation, as her Special Item.

Labels: board game, Tannhauser, Tannhäuser, U-Chronic Token of the Month