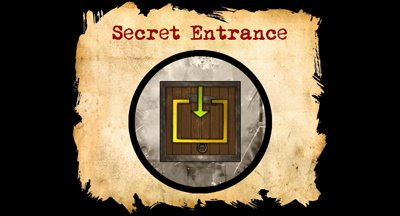 This month's U-Chronic Token is a Scenario Token. It is not placed in any character's Equipment Pack. This token will allow players to add an additional Entry Point to the map. I have also included a three player mini scenario that employs the Secret Entrance Token. 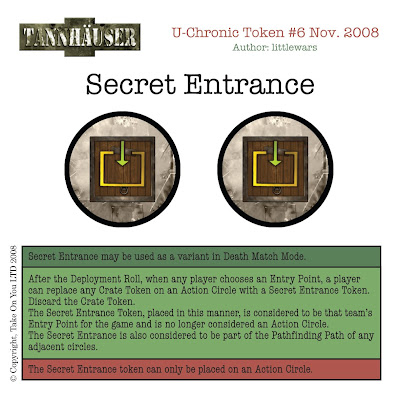 Objective:
Pick up the most Victory Points and eliminate both teams.

Victory Conditions: Once one team is eliminated, the game ends. The player with the most Victory Points wins. In the case of a tie, the team with the most characters remaining on the board wins. 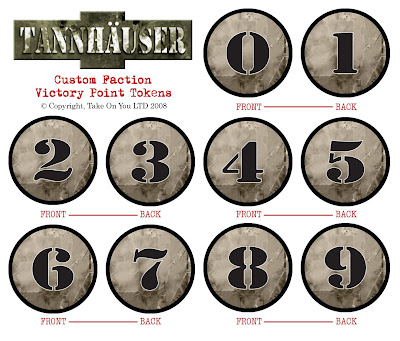 I'd like to suggest a custom Mercenary team made up of 4 Heroes for the scenario. Here are some ideas for a Mercenary faction:

• Wolf - Available as a pre-order promo from FFG, you can order Wolf from France and download a scan of the english rule book located on Board Game Geek.

• Yula Korlitz - Though she is a Reich character, Yula's rule book has a scenario where, under the orders of the Kaiser, she must eliminate Von Heizinger and his guards, so it is not that much of a stretch to include her in the Mercenary faction.

• Ikarus Faith - A custom character created by Plageman and the french forum that you can download (in english) from the Black Sheep Archives.

• Gorgei Volkov - A dual Mercenary/Matriarchy character currently only available in France. As this month's bonus, here is a translation of Gorgei's Equipment Packs: 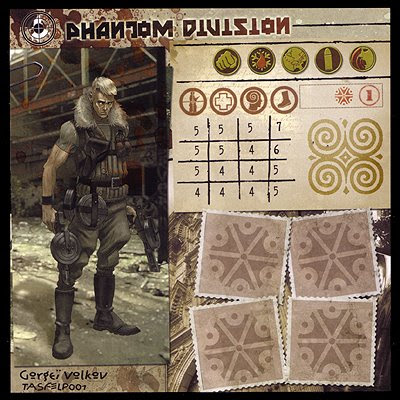 Special Item
• Multiple Targets
Gorgei may, after his Combat Roll (if he is still alive, in the case of a Counterattack), make a second shot against another target but uses his lowest Combat Value. Multiple Targets may not be used in a Counterattack. Requires Gorgei is equipped with the PPSh-41s machine pistol.

• Hero of Rugen
Thanks to this badge, consider Gorgei Volkov's Combat characteristic column to have the following Values: 5,5,5,5.

• PPSh-41s
The rules for this appear in the above Combat Pack.

• Survival
When Gorgeï is killed, there is still a physical presence on the board until the end of the following Game Turn. Dead, he may no longer take an Action or be healed, but does block Movement as if he were alive.

His Disposable Equipment is dropped when Gorgei is removed from the board.

• Hero of Giva
When Gorgei is wounded for the first time, one wound is automatically ignored.

• PPSh-41s
The rules for this appear in the above Combat Pack.

• Gold Star
Announce the Gold Star's use at any time. Until the end of the Game Turn, Gorgei Volkov uses his highest Combat, Mental, and Movement Values, regardless of his current health status.

You may only use Gold Star once per game.

• Major
During the Deployment Roll, the rank of Major allows you to add a 5-point bonus to the die result. This bonus can not be combined with the bonuses of other ranking characters.

One last note: if you decide to order Gorgei from France, I highly recommend the online retailer Ludibay. They are extremely fast with shipping (less than two weeks) and yes the webstore is in english.