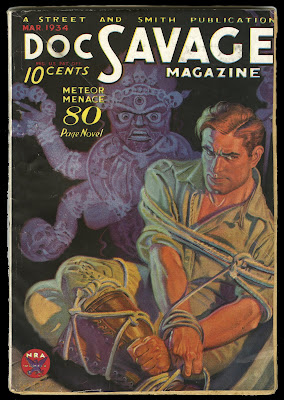 SPOILER ALERT!!!
I don't normally pack these reviews with spoilers, but there is some great stuff in this review that really needs to be talked about. You have been warned.

Lucky number thirteen. That is certainly the case here. Lester Dent is back on target and continues the adventures of Doc Savage and the fabulous five in grand style.

The Meteor Menace picks up months after the events of The Man Who Shook the Earth and continues the story in Antofagasta, Chile. A hospital funded by Doc has been constructed and a bizarre blue meteor streaks through the sky terrorizing the local populace. It seems that anyone in the presence of the meteor suffers from a terrible condition - they become mindless vegetables that are harmful to themselves and others.

Strangely, a beautiful woman is seeking Doc's help. Her name is Rae Stanley, she is a knockout, as usual and capable as well. She talks to Monk and Ham and begs for them to help her save her father who has been captured by the insideous villain, "Mo-Gwei, master of masters, who wears the Mask of Bron, the half-king of hell." The kick-ass heroine is one of my favorite parts of the Doc novels and Rae is particularly well done. She is feisty, courageous, and beautiful.

The meteor streaks through the sky and affects the whole team. They are captured.

Doc and his crew all awaken in a sparsely furnished room in a primitive structure in Tibet. They come to realize that over a month has passed with them having no memory of how they got there.

Rae Stanley emerges from another room and is very affectionate to Doc. It seems that in the missing month, they got engaged. This is a great moment where Dent writes Doc's reaction perfectly. The Man of Bronze is flummoxed. There is nice banter where his men give him a hard time about being engaged. He takes the ribbing with good humor. Doc and Rae kiss. He is very kind to her. Doc is far from stoic, a perception that so far, I do not agree with. He keeps his emotions in check, but Dent does let the readers see them.

Doc has moments of failure and doubt. He has a chance to rescue Rae's father, but fails. Doc and his men finally battle a horde of Mo-Gwei's men and solve the mystery of the Meteor Menace.
Some items of note:
On page 12 it specifically says that, "Doc Savage and his men had a policy of never directly taking human life." This is the completion of the evolution of this policy. The stories started with no policy, Doc killed the bad guys. Then he only killed when he was in direct danger. Then if necessary, and now to never take a life. I am not sure if these changes were in reaction to reader feedback or if the age of the readers was younger than they had planned or if it was in reaction to world events and an effort to make Doc the greater hero.

Johnny has given up his glasses completely in favor of putting his magnifier in a monocle.

Doc lies at least twice in this novel. There is some derogatory language regarding the Tibetans. One of the villains, an Englishman, refers to them as "slant eyed scuts." But these kinds of references are restricted to the villain's dialog putting the prejudice on them and not the story. Dent treats the Tibetans fairly enough. 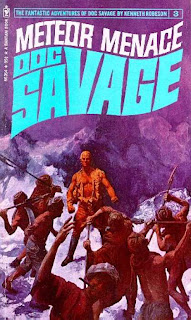 For this review I read my Bantam Paperback #3 - 6th printing.

The Pulp cover is by Walter Baumhofer and the paperback cover is by James Aviati. The Pulp illustrations are by Paul Orban. Again, it is through the work of Chris Kalb and the 86th Floor site that you are seeing these illustrations.
Posted by Pete Miller at 11:43 AM