Pulp of the Week - The Chinatown Death Cloud Peril 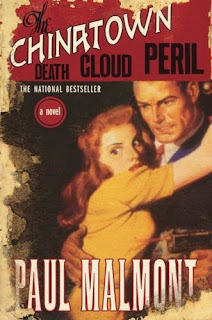 Ad writer Paul Malmont became a Pulp Legend when he wrote this book, his first published novel. The core idea is so good and the novel is so well written that this is a must read for every pulp fan.

The two main characters are 1930s writers Lester Dent and Walter Gibson. These real life pulp legends have a pair of things in common. They are the two top-selling writers in the country and they are both forced by publisher Street & Smith to write under a pseudonyms.

Dent wrote the bulk of the Doc Savage novels under the S&S house name Kenneth Robeson and Gibson as Maxwell Grant wrote many of the twice monthly Shadow books. As portrayed in Malmont's novel, the two men are friendly rivals who join forces to solve a long standing mystery.

Other writers (and historical figures) of the era are characters in the book as well. HP Lovecraft plays a crucial (and odd) role, Ron Hubbard (nicknamed the Flash due to his speed at cranking out a story) is the new guy. John Campbell, Orson Welles, and E.E. 'Doc' Smith play roles as well.
Quite a bit (and in my opinion a bit too much) of the story that takes place in China with the country in turmoil with itself and at war with the Japanese. These scenes alternate with the action in New York City and Providence, RI.
The final merging of the two running stories and the wonderful treatment Malmont gives the plucky Norma Dent (Lester's wife) make for a memorable and exciting final act.

The Chinatown Death Cloud Peril really is a wonderful story full of thrills, twists and villainous acts that provides some interesting insight into the era of reading, when 30 Million fiction magazines were sold every month in America. World War II and paper shortages contributed to the art forms demise and television finally killed it.

Hopefully eBooks and the internet will help usher in a resurgence of reading for fun and entertainment. The pulps of the 1930s cost between 10 and 25 cents and many of the writers were paid a nickel a word - $3000 dollars a novel. Not really a bad living for those who could pound out the books like Dent and Gibson. In the novel, Gibson had his own private train car. I don't know if that is true or not.

Sadly for the modern writer, the contemporary SF and Fantasy magazines that are still left pay just a little more than that.

Paul Malmont has written two other novels. The first is Jack London in Paradise, an adventure featuring writer Jack London. The second is The Astounding, the Amazing, and the Unknown,  which is a sequel to The Chinatown Death Cloud Peril. This book is due out in January, 2011.

You can click on the Amazon link to the right and pick up The Chinatown Death Cloud Peril for less than five bucks and help me out, too.
Posted by Pete Miller at 9:29 PM