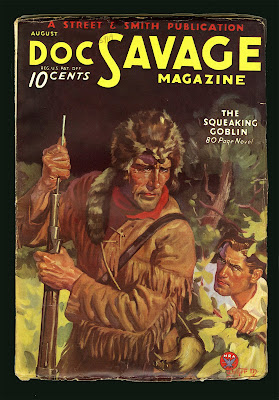 The Squeaking Goblin - August 1934
This is a different kind of adventure for Doc Savage and the fabulous five. Instead of the usual tropical locale, it takes them to the less than exotic lands of Maine and the Appalacian Mountain country where a buckskin-clad ghostly figure is killing off the Raymond clan. Doc is called for help with solving the decades old mystery of the Squeaking Goblin.

An old hill-billy feud has restarted pitting the Raymonds against their nemesis, the Snows. Dozens have been killed in the mountain country and the phantom Goblin has terrorized the Raymond clan, leaving no tracks and no evidence of bullets. The shots are characterized by a sharp squeak when they are fired.

How the folk legend of the Squeaking Goblin is tied to European pirates is the mystery that Doc and crew must solve. Of course there is a beautiful young lady, one of the Raymonds, named Frosta Raymond. Like most of the women in these pulp tales, she is feisty as well as beautiful. Could she have taken up the mantle of the Goblin? Or is it the nastiest, lowdown snake of the Snows – a giant named Jug?

Renny gets featured the most of Doc's crew, with Ham the least. There is a mention of Long Tom having a gold front tooth. Some of the locals are the colorfully named Fatty Irvin, Jug Snow and Old Jude. 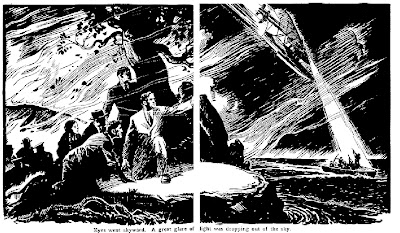 Doc's plane is mentioned as being bronze in color. He also makes use of an infrared searchlight on that plane.

The language of the period that caught my eye in this story included the phrase, "punk liars" that I like quite a bit. There was also a nickname for cigarettes that I thought was limited to England and is now considered a derogatory term. Additionally, there was an entertaining description of a hill-billy bedroom - "a corn husk mattress" and a "flour sack curtain."
Doc is getting more and more in control of his emotions – "... the bronze man whose emotions were schooled until they did not show..." – but he still feels the pain of the death of those around him. He is not a robot.

There was a place in the story when Doc and his men were worried that the bad guys were monitoring their radio conversations so Doc cut off the conversation. I wondered why they just didn't speak Mayan.

I liked The Squeaking Goblin. It was nice to see Doc in a different setting and the descriptions of the rural mountains and the folks living conditions were interesting. The people either walk or ride horses. There are very few cars on the rutted dirt roads. The accents were phonetically spelled out, as usual, and quite entertaining. 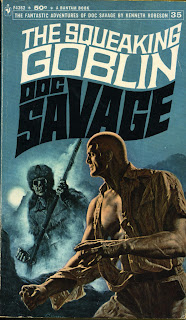 I give The Squeaking Goblin an 8 of of 10. The pulp cover is by Walter Baumhofer and the Bantam paperback is by James Bama. The Paul Orban interior illustrations came from the 86th Floor website.
Posted by Pete Miller at 11:30 AM