Tannhäuser Tuesday - When It Rains...

This weeks Tannhäuser announcement from FFG is welcome news to all present and future players... 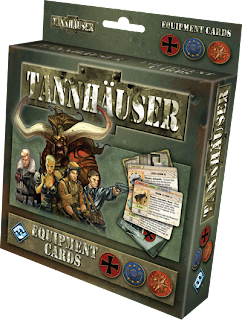 Fantasy Flight announces Tannhäuser Game Play Aid
Further evidence arrived today of Fantasy Flight Games' continued support of the Tannhauser game system came today with the announcement of the Tannhäuser Equipment Cards, a set of over 200 cards that will relieve players of flipping through pages of rulebooks and the various expansion booklets for the rules for a particular gun or item. The initial Equipment Cards set will include cards for everything printed to date and for the Hoss and Oksana expansions that have not been released yet. This includes all crate and Bonus Tokens printed so far. The card set will retail for $14.95. I call that a bargain. 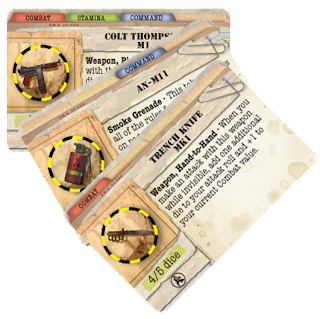 Future expansions will include both tokens and cards. The Equipment cards are a table friendly 1 5/8" x 2 1/2" size (FFG's Mini American) that should be easy to read and not crowd the table too much. Your rulebook should be referred to 1000 times less often once these cards are in hand.

FFG's Upcoming page shows the cards as being "on the boat" - meaning they should be in stores in four to six weeks - well before Hoss and Oksana arrive (they are still listed as "at the factory.")
I was scooped on this story by Miah, but in my defense I was posting Tannhäuser stuff...
This news takes precedence over your regularly scheduled Doc Savage Character Card, Sheet, and Tokens. Those are coming later today, and maybe even an in progress figure picture...
Posted by Pete Miller at 3:17 PM