Pulp Film of the Week - John Carter of Mars 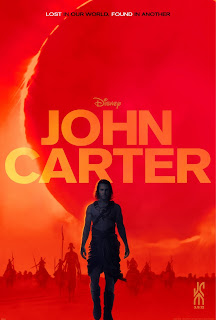 John Carter is a sumptuous production of the classic Edgar Rice Burroughs novel, A Princess of Mars. This book started both his Mars series and his novel writing career. The book was first serialized in All Story Magazine beginning in 1912, and is one of the most successful of the scientific romance genre, as well as being an inspiration to thousands of writers and filmmakers. It is hard to judge a version of the original on its own merits as it has been copied so often. Pieces of John Carter also echo sequences from other films, most obviously the Star Wars prequel trilogy.


The cast is quite good and the visual effects are gorgeous, but there seemed to be something lacking that kept the film from being a 10. I has been many years since I read the novel, but one thing is obviously different. In Burroughs' book, the Martians are nude for the most part. I guess I can forgive Disney for not putting a few hundred million into an R rated nudie SF film. That aside, the production design, costumes, and characters felt right.


I loved the way the framing story was handled and I am hoping that the movie does well, because there is enormous opportunity to make the additional Mars books into movies as well as the classics of the SF and Fantasy genres. Very few have been made into films.


The film is not without its faults. A big arena scene feels very much like the finale sequence of Star Wars: Attack of the Clones and a chase on flyers reminded me of the pod racer sequence in The Phantom Menace - even the sound design echoed the pod racers. While John Carter is not a perfect film, I can't imagine that I will ever see a better film version of A Princess of Mars.

Regarding the marketing of the film… I do understand why Disney chose to not call this movie A Princess of Mars. I'm sure the testing showed that boys were repelled by that title. But, the generic "John Carter" title, while letting the fans know that this is the Burroughs book, says nothing to the majority of the audience. I think they should have gone with "John Carter of Mars" (which is clearly the title the movie itself thinks it has) or even "John Carter of Earth." Either way, we'll never know if that would have helped the movie sell tickets. As of this writing, Deadline is estimating the film will have a 29 million dollar opening weekend, so it would seem that unless the word of mouth is fantastic (my audience applauded at the end) Disney stands to lose a bundle on this movie, which is a shame. Rotten Tomatoes critic score is 49% and the audience score is 72% as is common with popular cinema. 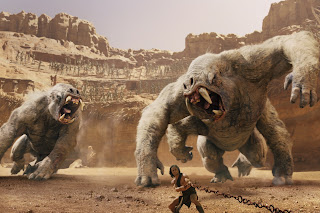 Last night I plunked down $18 for an Imax 3D screening of John Carter. I wish it would have been simply in Imax. I don't know if it was the projector alignment or what, but there was far too much ghosting. The fact that this was prevalent in the trailers as well convinces me it was the theater, not the movie itself. I also think the film may have been a bit too cutty for 3D. If I take the kids, I'll opt for 2D. The gorgeous visuals suffer somewhat from the muted brightness of the 3D process. I'll give the movie an 7.5 out of 10. It is a classic story well worth seeing.