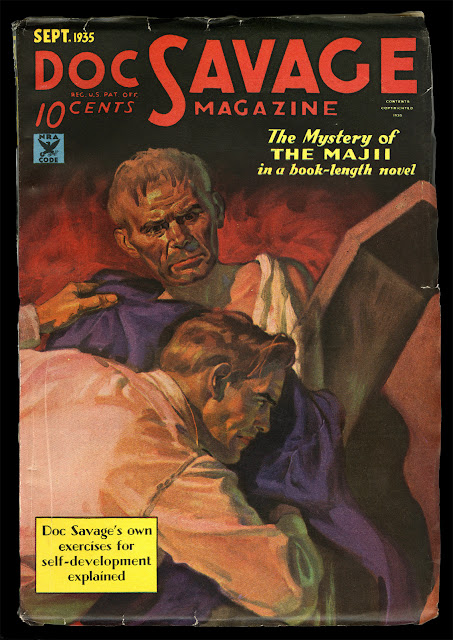 This better than average adventure follows Doc, Monk, Ham, and Long Tom as they pursue the mystery behind Rama Tura, a mysterious man of Jondore (a part of the British empire, a country somewhere between Turkey and China.) Rama Tura has come to New York and is performing miracles by turning common pebbles or glass baubles into genuine gemstones. This act is generating millions in profits.

A Jondorian woman, called the Ranee, is also in New York seeking Doc Savage's help with troulbes in her native land.

Doc gets involved and tries to uncover the trick behind Rama Tura's act, but the gems are real and the audience goes away poorer, but well satisfied. During one performance of the act Doc sets up a hidden camera, but when he retrieves it, the film is gone.

The chase lead all the way to the primative Jondore where all the players reveal themselves and the Majii appears and causes Doc a world of trouble and nearly kills everyone.

There were some nice turns along the way and the Monk and Ham bantering played out better than usual. Several times the attractiveness of a lady's ankle is noted. One of these times it is mentioned of a woman known as The Ranee. She is of the Jondorian nobility. In one scene, Monk trips her and catches her falling. A noble man of Jondore, the Nizam, sprang forward, swung a fist, and knocked Monk down as beautifully as he had ever been knocked down in his life.

"She is the Ranee!" the Nizam gritted. "In Jondore, you would die a thousand deaths for laying a hand upon her!"

Ham looked at Monk on the floor and said, "He never did have any manners."

Monk got up. His neck was red. Hard tendons made four white lines down the back of each hairy fist.

And then—no one exactly saw it—the Nizam was flat on the floor and the noise of the blow was resounding from the walls, and Monk was over the fallen one, grasping him by the collar. Lifting the Nizam, Monk shook him as if trying to ascertain if his teeth would come out.

"This is the United States," Monk said grimly. "And when you sock a guy you oughta be sure he stays socked."

Other scenes that caught my eye were: Doc loads a film camera to spy on Rama. The film magazine holds over an hour of film! Doc chides Monk for taking a kill shot on one of their enemies. A scene where British officials ban Doc from traveling to Jondore despite Doc having provided great service to "John Bull" - the British equivalent to Uncle Sam - meaning that Doc had be of good service to the British Empire in the past. An underling asked what should be done with a prisoner - "Determine," commanded the Majii, "just how many knives his body will hold."

This was a solid Doc Savage adventure and at the end contains direct hints about the next adventure, Dust of Death, as published in the original pulp releases. However, Bantam had already published Dust of Death more than 2 years earlier...

I'll give The Majii 7.5 stars. It was a good, fun adventure with some nicely written parts from Lester Dent. The pulp cover is by Walter Baumhofer, the pulp interior art is by Paul Orban (from the 86th Floor site) and the Bantam paperback cover is by James Bama.