Pulp of the Week - Phylogenesis 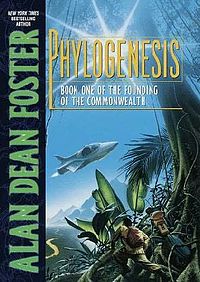 I have read many of Alan Dean Foster's Humanx Commonwealth novels like Ice Rigger, Midworld, and the Flinx and Pip adventures. These are great adventures and I enjoyed them immensely. I still have my autographed 1975 printing of The Tar-Aym-Krang. I like that Foster continues to go back and tell stories in that science fiction universe. Over the past decades my reading decreased and it wasn't until a recent library trip that I learned of the Founding of the Commonwealth series. I borrowed Book One, Phylogenesis and gave it a read.

I found this story an interesting way to begin the story of the alliance between the humans and the insect-like Thranx. This is not the story of diplomats and presidents, of hive leaders and royalty. Phylogensis tells the story of two unlikely heroes.

Desvendapur is a Thranx poet and healer. For the insect-like race, those two occupations are nearly one. The Thranx live in an orderly, nearly crime free society on Willow-Wane. But Des has a secret. He is obsessed with the strange fleshy creatures recently discovered. He wants to meet these mammals; these baffling creatures. How could they be intelligent and how could such squishy, unstable things have developed a stardrive? Is there really a secret colony of the things in the wilds of Willow-Wane?

Cheelo Montoya is a hustler operating on the streets of Golfito, Costa Rica. When a robbery goes awry, he flees into the Reserva Amazonia, waiting for things to cool off. If he can stay out of sight long enough, there is a huge payoff waiting for him.

There is never a doubt that these two deeply flawed individuals will meet, but their relationship is wonderfully played and makes the book. Some of the prose is a little clunky, but the story pushes ever forward toward an exciting and somewhat surprising climax. A satisfying tale of (nearly) first contact and the beginning of the Human and Thranx alliance - The Humanx Commonwealth.

I'll give Phylogenesis a 7 out of 10. This is not Foster's best, but was fun and I am looking forward to reading more tales in this universe and in this series. The Jacket painting is by Mark Harrison.