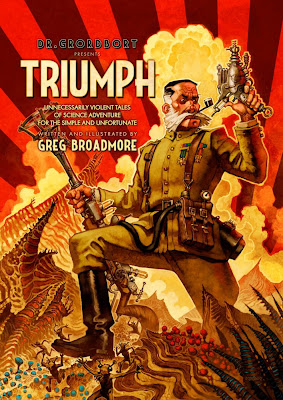 Triumph: Unnecessarily Violent Tales of Science Adventure for the Simple and Unfortunate
by Greg Broadmore

Triumph, as I shall call it, is the third steampunk book by Weta designer Greg Broadmore. This book contains two comic book stories with 6 pages of adverts for rayguns and rockets in between. The book is a lavish production with huge 8.5 by 12 inch pages of thick paper (nearly cardstock) wrapped in hardcovers. Broadmore's style is bright and bold, with plenty of jokes, one-liners and irony in the dialog.

The stories feature the pompous British adventurer, Lord Cockswain, sporter of bushy muttonchop sideburns, wearer of jhodpers, and lacking both tact and patience with his trigger-finger. Much of the humor and charm of Cockswain is the utter lack of consequences for his often horrific actions as hinted at in the subtitle of the book.

The lavish production values push up the price of the book, but it also pushes it into being an art piece. The stories follow the pompous Lord Cockswain as he rockets from place to place spreading British rule and punishing the local inhabitants with the fallout of his aforementioned trigger finger.

In the first story, "Into the Lair of the Space Wankers," Cockswain finds himself marooned on the planet that makes the solar system's most popular fizzy drink and inadvertently uncovers the secrets of Kuiper Kola. And then causes mass havoc.

The second story follows a psychiatrist following Cockswain on a hunting trip where the shrink is trying to get the adventurer to open up about his emotions. It doesn't end well for said psychiatrist, I must say.

The book does end well for the readers, however. It is a joy to behold and there is much fun in rooting out new humorous touches and background gags with each rereading. And there are Moon Maidens, fake movie one-sheets, beer ads, and did I mention Moon Maidens?

It also doesn't hurt that Broadmore is a terrific chap that patiently sketched and autographed each book for the eager fans.