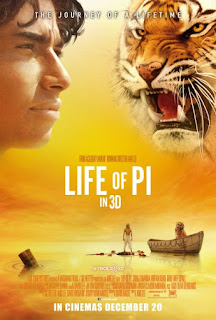 LIFE OF PI
This adventure story features the journey of a young man who survives a shipwreck and ends up trapped in a lifeboat with a Bengal Tiger. I was pleasantly surprised by the amount of the movie that did not take place on the boat. There were many places visited in the story of a young boy nicknamed Pi, whose family owned a small zoo in India. When the family moves, they pack up the whole zoo, load it up on a ship, and head off to Canada.

It is no spoiler to say that that the boy and the tiger end up in a lifeboat and there spend many months adrift at sea and learn to survive together.

The film is quite beautiful and much visually richer than one might imagine given such a confining sounding premise. However, in the final analysis, I found the film good, but not great. 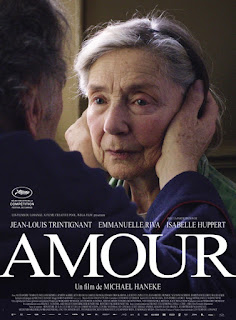 AMOUR
This official Austrian entry which is also a nominee for Best foreign language film also got nominated in a number of other categories including Best Picture. The story follows an elderly couple as the wife slides into the decline of old age and her husband struggles to care for her. The film is wonderfully acted and starkly honest in dealing with the issues of aging. However, I found it leaning toward dull.