The Green Lama #5
The Man Who Wasn't There 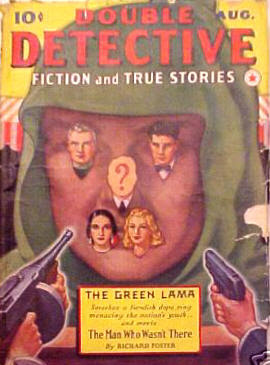 Adventure House is having a sale. Many pulp reprints can be had for $3. I picked up a few and as it turns out, High Adventure Magazine #88 is the fifth Green Lama story, originally published in the August, 1940 issue of Double Detective Magazine. I have to say I liked the story a lot. But, then again, I had just read Capt. Hazzard... 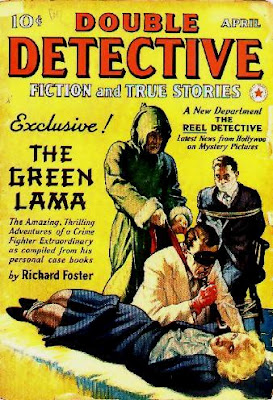 The Green Lama first appeared in Double Detective Magazine in the April 1940 issue. Kendall Foster Crossen and the Frank Munsey publishing company created the character to have a competitor to "The Shadow." The character was originally conceived as "The Gray Lama" thinking that he could hide in the shadows and sneak around, but tests of the cover art proved to be less than satisfactory so they changed his color to green.

The character was published regularly through the March 1943 issue of Double Detective. The Green Lama is Jethro Dumont, a wealthy New Yorker who travels to Tibet and studies Buddhism. It is there that he gains the insight, perspective and dedication to the ideal of righting wrongs and helping others. He also has an additional identity in Dr. Pali, a Buddhist Monk.

The Green Lama has also had a life on the radio and in the comics, where Kendell Foster Crossen also wrote the scripts. In the comics he gained superpowers including flight. The character lives on in the public domain and is currently seen in "The Green Lama" published by AC Comics, vintage reprints by Dark Horse, and Alex Ross and Jim Krueger's version by Dynamite Entertainment. 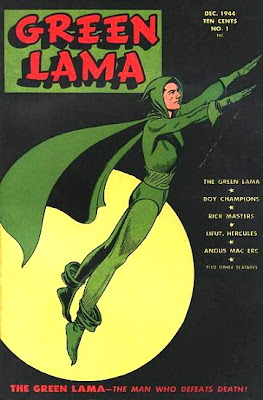 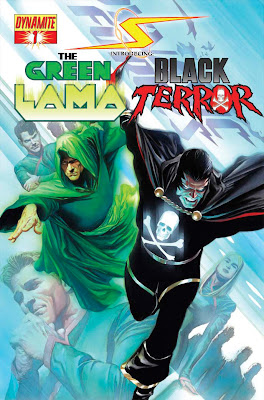 Having come in at issue#5 I am not sure exactly how Dumont returned from Tibet and brought two new personas to New York and assembled his team. Pair this with the fact that Jethro Dumont does not appear in this story at all and this reader is not crystal clear on these story points. This story features a lot of Dr Pali.

"The Man Who Wasn't There" is a murder mystery set on an ocean liner sailing from Los Angeles to New York. It is a good adventure yarn that pits Dr. Pali and his friends against a vicious criminal gang who isn't shy about throwing people overboard. The leader of this gang is shrewd and frames Pali for the murders. There is an adventuresome call to Port in Havana after passing through the Panama Canal. Through use of his lock-picking, Radioactive Salt powers, and intellect the Lama uncovers the villain's identity and saves his reputation.

Kendall Crossen writes the Lama well, using lots of Buddhist quotes and sayings. He obviously did research and enjoyed it. The beliefs are treated with respect and made to seem exotic and fascinating. I enjoyed the yarn and I'm looking forward to reading more.