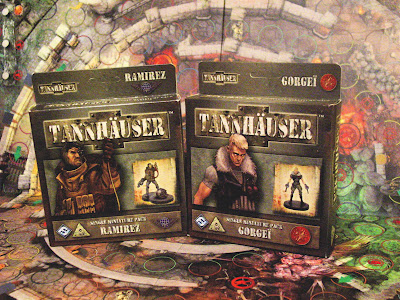 I finally received my Georgi and Ramirez expansion packs so I thought I'd give a look at what comes in the box. You get the tokens, the character sheet, rules booklet and of course the figures. 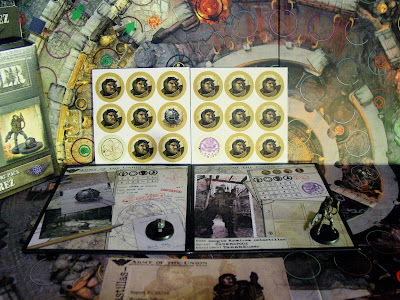 The Ramirez pack comes with 2 figures. One is Sergio Ramirez Delastillas, a Warrant Officer in the Union Army. The second figure is the Hound DOG (Directionally Operated Gun), a remote that Ramirez can send off to shoot things. 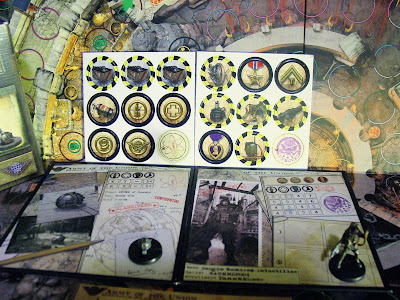 Combat pack:
Mark 19 mod A1 grenade launcher - the grenades do not cause automatic wounds or Debris Tokens, but he has an unlimited supply.
HB-3 Visor lets him ignore smoke penalties.
Bouncing Betty - the user place this mine and then can set it off at any time (even in the middle of any player's turn) to do 2 automatic wounds to figures on its circle and all adjacent circles. 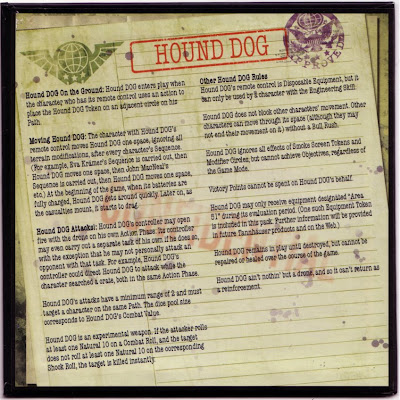 Hound DOG card picture courtesy of littlewars
Additionally, the NOS Token of the Month is included in this pack. It allows the Hound DOG to move 3 spaces on one turn. This can only be done once per game. The Hound DOG only gets one token and it must be an "Area 51" token. NOS is the only Area 51 token so far. 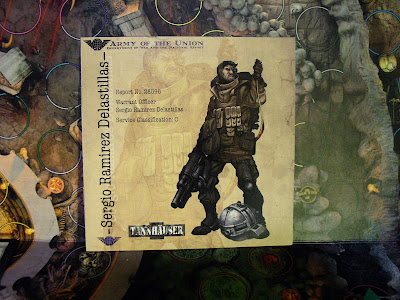 I am not too happy with the paint job on my Ramirez figure. It is possibly the worst of any of my Tannhäuser figures... But I love the character and his tokens look like they give a lot of interesting choices. 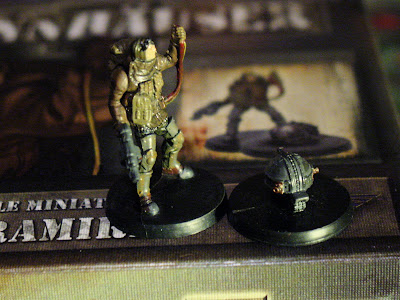 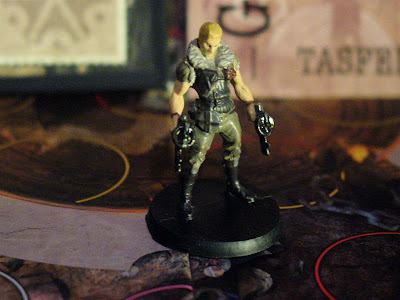 Georgi Volkov is the leader of the mysterious Phantom Division; a Matriarchy hero that may also be taken as a Mercenary by other factions. However, Georgi will never fight against a team that contains Matriarchy characters. Unlike Ramirez, Georgi is fairly well painted. 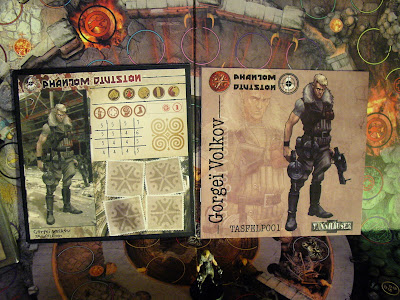 Special Object is Multiple Targets - this ability allows Georgi to shoot at 2 different targets during his Action Phase. The 2nd attack uses his lowest Combat Value.

Combat pack:
PPSh-41s Submachine Guns - these add a 1-point bonus to the result of each die (except 1s) and add 1 to the users Combat Value.
F1 Fragmentation Grenade - regular grenade rules.
Hero of Rugen - Georgi's Combat Value column is 5,5,5,5.

Stamina Pack
PPSh-41s Submachine Guns - see above.
Survival - If Georgi is killed his figure remains on the board until the end of the next game turn. He may not be healed, move, take any action, or be affected in any way. His disposable equipment is not dropped until his figure is removed.
Hero of Giva - The first time Georgi is wounded in each game, he automatically ignores one wound.

Mental Pack
PPSh-41s Submachine Guns - see above.
Gold Star - Once per game Georgi may use his highest row of stats until the end of that game turn.
Major - Receive a 5-point bonus to the Deployment Roll at the start of the game. 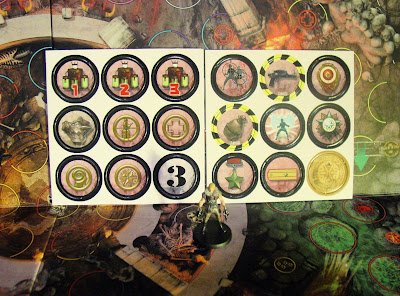 Additionally in this pack is Wolf's Wolftrap Token. You may use an Action Phase to place the token on an adjacent circle on the same Path. Any character passing over that circle suffers one Automatic Wound. This Token may only be used by Mercenaries.

This is really great for people who didn't pre-order the game 2 years ago and have never been able to get Wolf without paying an arm and a leg on Ebay. This token can be used by other Mercenaries, but really... FFG should have either included another token or release Wolf now. It has been a pre-order exclusive long enough. Or they could have made Wolf available as a pre-order special with Novgorod. Players of these kinds of games with lots of expansions tend to be completists and having something they can't get can make folks a little bitter. Now if there were lots of exclusive expansions like Zooloretto then that would be different. Getting everything would be a challenge and part of the fun, but not when there is just one thing you can't get. Just put Wolf for sale, FFG. C'mon, be a sport. 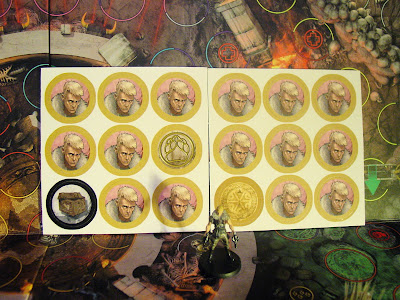 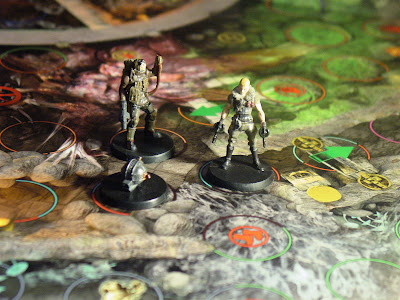 I also recieved Okko in the same shipment from The War Store. This looks like a pretty cool game and the floor tiles might be adaptable into Tannhäuser maps. 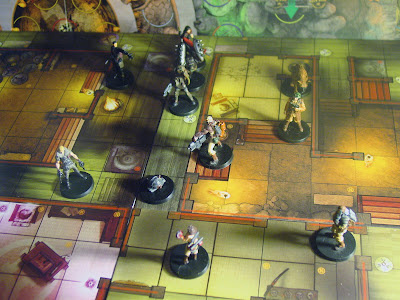 The publishers of Okko have kindly supplied a bunch of clip art of the furniture and accessories to assist people in customizing their maps! I will post a write-up of Okko in the near future.


My custom additions to Tannhäuser are not created by, distributed, or endorsed by Take on You, Asmodee, or Fantasy Flight. Tannhäuser and all related characters are trademarks of Take on You and © Take on You LTD.
Posted by Pete Miller at 12:46 AM