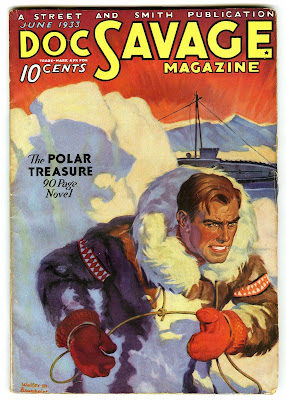 Now this is more like it! After a couple of lesser issues, Lester Dent comes roaring back with a ferocious tale of double-crossing pirates and lost love. This is a really solid adventure story and just a great read.

When Doc goes backstage to congratulate the brilliant violinist Victor Vale he steps right into a decades-old mystery. The luxury liner Oceanic had been lost at sea with only a few survivers. The blind Victor Vale and a few of the crew were all that lived. Rumors were that $50 Million in gold and jewels had been aboard. Well, the other survivors were after Victor and Doc and his men were caught right in the middle of it.

This adventure is full of two-fisted excitement, polar submarines, and another beautiful, capable young woman to be rejected by Doc. He is attracted to her, but knows his life of adventure cannot allow the kind of relationship she would want.

Highlights include the first mention of Doc and his men being honorary Police Captains, Doc using a two-part tracking spray that works based on smell, and several mentions of dope and people using dope, including the villains getting some Inuit people doped up.

Doc is also revealed to be a composer. The concert he was attending at the start of the novel was a performance of one of his pieces. Victor Vail, the blind violinist says of Doc's composition, "In my humble opinion, and to the notion of other artists, that composition is one of the most masterly of all time."

At one point Doc is so overcome that, "His throat was cramped with emotion." He also chuckles and jokingly calls his men "a bunch of bums." This novel is chock full of good humor, daring heroics, punching, polar bear wrestling, and machine guns. Oh, and an aerial dogfight and a massive Renny and Monk throw down against the walrus-like captain of the polar submarine, the Helldiver. 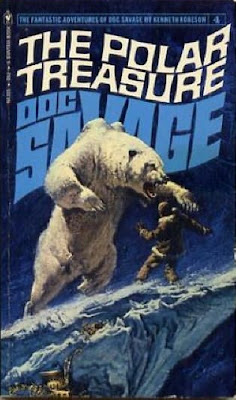 For this review I read my copy of Bantam #4 - July 1972 4th printing. Amazing. The 4th story published was reprinted by Bantam as #4. Must have been a mistake... 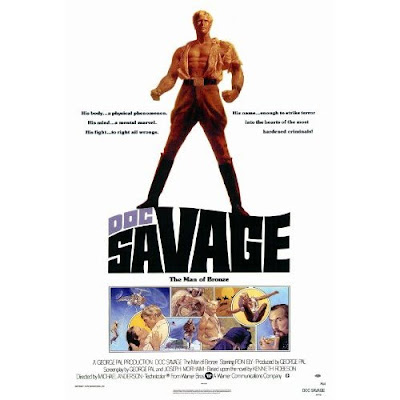 I have ordered the 1975 Doc Savage movie DVD from the Warner Bros Archive. I hope it is not as bad as I remember it. I'll post a review when I get it. I only seen this movie once and that was 34 years ago.

I watched the Doc Savage film last year. It was fun. Be prepared for a lot of camp.

The camp. That's what I hated about it. It just seemed forced. I love the 1960s Batman TV show. When I was 7 and it was on, that was the best show. To me, it was serious. Seeing it as an adult, it plays completely differently. It is hilarious. Serious to a kid, funny to an adult.

The Doc movie (in my memory) was so forced with the cheesyness. But that was 30 years ago. I'll watch with my kids and we'll see.

I am looking forward to a straight version of the Man of Bronze.

Opening scene with the fortress of solitude is totally great, then the John Phillips Sousa theme chimes in, and you're left scratching your head.
Still, it definitely had it's moments if you can slog through.