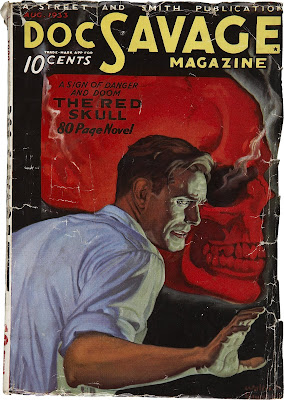 This is the first Doc Savage Western, in that the villains are all cowboys. An unknown person is trying to stop construction of a hydroelectric damn in Arizona - Red Skull Canyon to be specific. One of the partners tries to contact Doc Savage to get his assistance, but his agent is stopped and Monk's gorgeous secretary is kidnapped. Doc and the fabulous 5 must track down the men and rescue Lea Aster.

This is very much a free-standing adventure. In the Bantam paperpack, at least, there is no reference to any other adventure previous or subsequent.

There are a few new gadgets and character bits in this book. Monk and Lea speak from Monk's private laboratory to the 86th floor via Televisiphone. Lea Aster herself is a never before seen character. She is described as blonde, tall, beautiful, and athletically fit. Monk boasts he had the, "prettiest secretary in New York."

It is mentioned specifically that Doc is not emotional. Previously, Doc was jovial, wry, and spoke with occasional humor. Doc is working at controlling his emotions.

Johnny's left eye is now said to be useless from a war injury. Previously it was diminished in use.

Dent uses the phrase, "Top hats and claw-hammer coats." I hadn't head this bit of slang for a tuxedo before and I quite like it. While the writing is good in this adventure it is a bit of lesser effort after the last two books. I don't think this will make many Top 10 Doc adventure lists, but it is no dog either. I was pretty sure of the identity of the villain, but there were just enough red herrings thrown in that I wasn't certain. 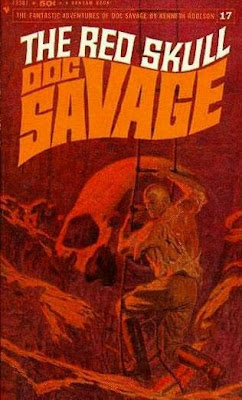 Saw you were new to Flearun and just wanted to say hello. You should check out my Doc Story at http://docsavagemanofbronze.blogspot.com/ and I hope you enjoy it for as long as it remains the same.