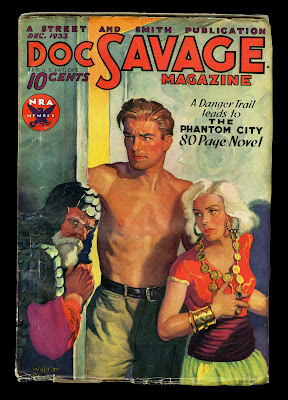 The Phantom City, the tenth Doc Savage adventure, opens with Doc getting hijacked by Arabs looking to steal the Helldiver, the under-the-polar-ice submarine that has already been featured in two earlier adventures. Needless to say, the villains do not steal Doc's sub, but instead he uses it to follow them back to the African coast where Doc and his men learn why Mohallet and his men wanted the Helldiver so badly. They discover an ancient hidden city carved whole out of the rock.

The action is good, the stereotyping of the Arabs is only mildly horrible, and once again there is a beautiful girl that falls for Doc. This time she is a lovely native of the Phantom City and as usual, falls for Doc. He knows his effect on women by now and tries to avoid her, but she falls anyway.

This novel features a few firsts.

The villains secret weapon is a railgun, a rifle that fires 1 inch diameter steel projectiles via a series of powerful electro magnets that pull the steel projectiles out of the gun at a blinding pace. It is virtually silent, as well. This weapon is still science fiction today.

The Phantom City also features the first appearance of the recurring 'character' Habeas Corpus, a pig that Monk gets in Bustan. The animal is described as a razorback with dog-like legs and "ears so big that they resembled wings." Additionally, Monk tells Ham, "I paid the Arab owner one qirsh for him. That's about 4 cents American money." Monk dresses the pig up in one of Ham's ties, setting the lawyer off on a rage - which amuses Monk to no end. Monk takes Habeas out of the desert with him at the end of the novel.

I have to say that I am not a big fan of the pig. He was fine here, but I remember as a kid growing tired of the porker with repeated exposure.

This novel also contains the first reference to "Mercy Bullets," thinly jacketed rounds that contain a powerful anesthetic. Doc's men will use these almost exclusively from here on out. I find it interesting that in less than a year, Doc has gone from killing many, many people to using the Mercy Bullets. I wonder if they had more kids reading the stories than they thought or if they were getting complaints about the level of violence in the magazine. Doc is getting less savage. 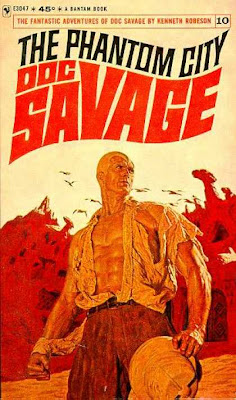 I read my Bantam Paperback March 1966 second edition copy and give this one an 8 out of 10.

The Bantam Cover by James Bama is one of my favorites and the pulp cover is by Walter Baumhofer.
Posted by Pete Miller at 1:05 PM