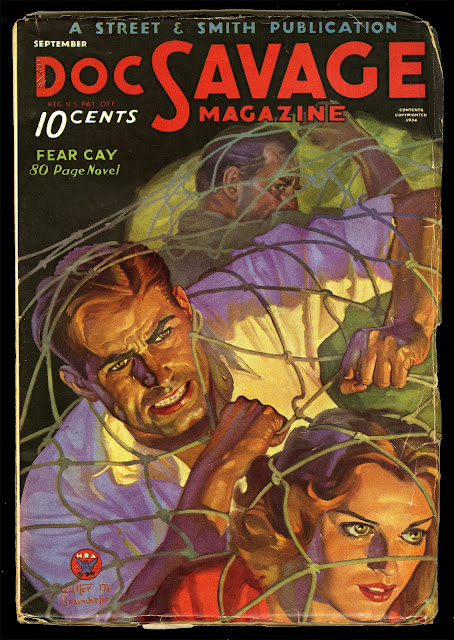 September 1934 - Fear Cay
The paperback cover of the astoundingly well titled nineteenth Doc Savage adventure, Fear Cay, shows Savage struggling on the beach of a desert island as he is getting wailed on by the 131 year old Dan Thunden. Fear Cay is great fun for a number of reasons.

First off is the already mentioned Dan Thunden. He is a spry, strong, tough SOB that claims to be well past a century old, putting his birth near 1800. He is a good match for Doc and is hiding a secret at the aforementioned Cay.

The book also marks the return of Pat Savage in a good featured role as she is mistaken for a starlet. Pat is also featured on the pulp cover with Doc. The real starlet is also a peach and it's a treat to get two strong female leads here. Strangely enough, the starlet is attracted to Doc.

A secret crime syndicate, Fountain of Youth, Inc. has been getting payments from the richest men in America and the gang behind it makes the mistake of getting Doc Savage involved. This takes him to the Caribbean to the titular Fear Cay.

As usual, Doc and his crew get captured, but this time Doc has a new trick. He unties himself by contorting his legs and then using his prehensile toes to untie the rope.

I'm sure I would not want to see that in a movie. 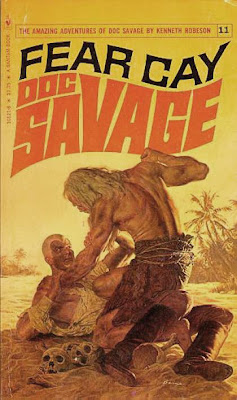 For this review I read my Bantam paperback, May 1966 (2nd printing.) I give Fear Cay and 9 out of 10. It is one of the better ones so far. The pulp was written by Lester Dent. Walter Baumhofer provided the (1934.09) original cover which features Doc and Pat. James Bama provided the great cover for the Bantam paperback.
Posted by Pete Miller at 11:53 AM