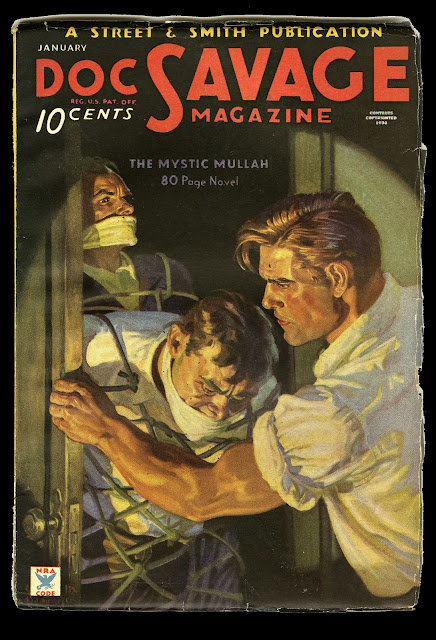 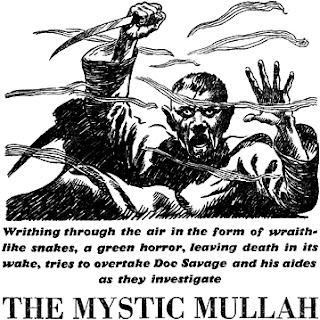 After reading The Mystic Mullah, I know where they got the best thing in the otherwise inept Doc Savage movie - the vaporous, floating green snakes. They appear often in the 23rd Doc Savage tale and are the weapon of choice for the mysterious Mystic Mullah.

The Mullah has been terrorizing the small asian nation of Tanan. The leader of that small, yet still mostly uncivilized nation, the Khan Nadir Shar, Son of Divinity, Destined Master of Ten Thousand Lances, Khan of Tanan, Ruler of Outer Mongolia has travelled to New York to seek Doc Savage's help. The Khan is a fierce warrior, but was educated in England and speaks "too perfect" English. 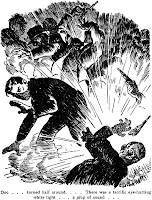 Accompanying him is 'the girl'. Every Doc adventure seems to have one. This time it's Joan Lyndell. Dent writes, "She was tall, with dark hair and lashes that were altogether delectable. But there was something else about her. She was businesslike, capable. Her person radiated efficiency.
"Her clothing was thoroughly modern, and so was the blue automatic which she held in her hand as the door opened."

An army of Tananese thugs has followed them to New York and there are a number of memorable battles. One takes place in an abandoned amusement park in New Jersey, with Renny and Johnny shooting it out among faux prehistoric terrors, and another in which Doc releases a gas bomb that bleaches the skin of everyone white. Doc "looked more aluminum than bronze." 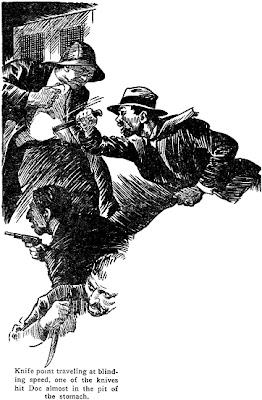 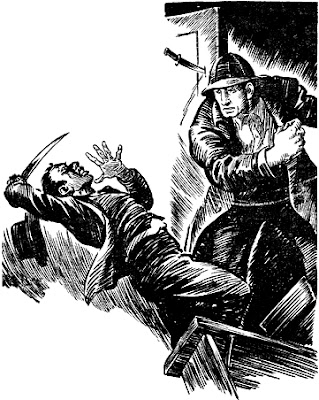 The action soon takes everyone to Tanan and the populace, terrorized by the Mullah, has turned against the Khan. Here we learn that both Monk and Ham speak Tibetan. We also learn about the macabre human spider, a dancing girl turned trained assassin, with long sharpened fingernails coated in poison. One scratch means certain death. 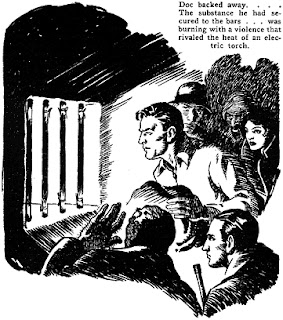 Of course Doc gets to the bottom of the vaporous serpents and the mysterious Mullah, but the trip was fantastic, and exciting. This is a cracking good pulp story.
I found this to be everything I want in a Doc Savage adventure - globe trotting action, exotic locations, bizarre villians, and memorable characters. I really enjoyed this adventure. Walter Baumhofer painted the original pulp cover, Paul Orban illustrated the pulp, and James Bama's painting graces the Bantam paperback #9. 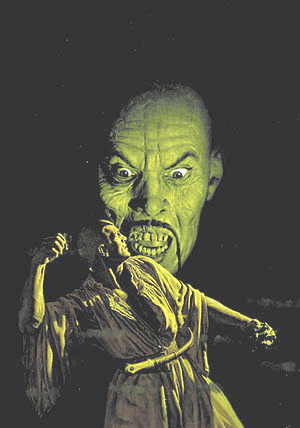 Once again, the great original art scan came from Chris Kalb's Doc Savage site. I give The Mystic Mullah a 9 out of 10.
Posted by Pete Miller at 5:01 PM