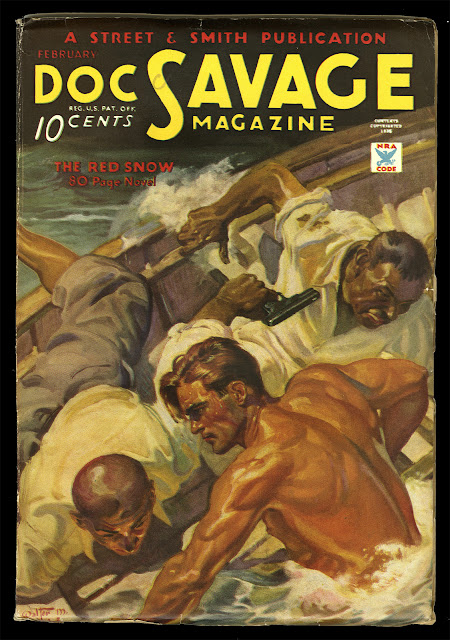 The story starts in the Florida Everglades and it doesn't take long to for Doc and his men to get there. In this adventure we have Doc, Monk, and Ham. Doc is looking into mosquito eradication techniques, but is attacked the minute that his baggage arrives at the Miami hotel.

The attackers are wearing blackface, but it is obvious they are Caucasians in disguise when the greasepaint rubs off.

After the attackers are driven off, Doc's trunks and luggage are collected, but blood drips from a bullet hole in one of the trunks. The trunk is opened and there is a dead man inside. This revelation leads to a series of events that are punctuated by a terrifying Red Snow. Yes, the Red Snow is capitalized throughout the book.

The snow falls to the ground and turns everything in its path to dust. People are turned into statues, but if they are later touched, they crumble to a fine powder. Trees and cars are disintegrated and left to blow away in the gulf breeze.

The 'girl' in this book is Nona Space. It is her actions that cause Doc to admit that he can't read women very well. He has spend very little of his life with females and they remain a mystery to him.

At one point, Doc uses the nickname Andy Blodge for Monk. That was new to me. When clews (that's the spelling in these stories), lead Doc and his crew along the beach to an abandoned development on the outskirts of Miami, there are several references to the Great Hurricane. These refer to the 1928 Okeechobee Hurricane that killed 2500 people in Florida and over 4000 total as it devastated Puerto Rico and other islands before hammering the state. 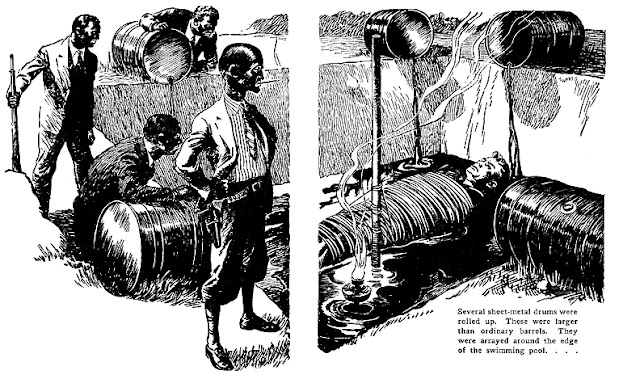 The chase to stop the Red Snow weapon leads across the Florida peninsula to the Everglades and finally, to another victory of the Man of Bronze over the forces of darkness and anarchy.

Chris Kalb's site again provided the interior art and these wonderful letters to the editor from the February, 1935 issue:


"MARY KAYE, Canada.
Allow me to congratulate you on your success at publishing so very fine a magazine as the Doc Savage. The October issue was the first I had read, but, not like so many other magazines I had tried, my last. The stories are all that can be called for in stories, and my only regret is that it is issued but once a month.
Kindly enroll me as a member of your club.
Wishing the magazine, the club, and you, the publishers of the magazine, the best of luck."
"BYARD SOOY, JR., New Jersey.
I am fourteen years old and a sophomore in high school, and have been reading Doc Savage for nearly a year. When we have to hand in book reports, I always report on the current issue of Doc Savage and the teacher herself got interested in the magazine because the report I gave was so interesting, now every month she gets the Doc Savage Magazine. The story that I liked the most was the "Sea Magician."
" FRANK COPELAND, Kentucky.
I think the Code is great. It can't be beat. As I intend to teach physical culture and muscle building in a very short while, I intend to impress the Code upon all my pupils. My, what a world this would be if every one would comply strictly with this Code."
Red Snow is part of the early Doc Savage adventures and Lester Dent was on a roll, cranking out one good yarn after another. I'll give it an 8 out of 10.

For this review I read my beat up Bantam paperback #38, purchased 35 years ago used for 45¢. The original pulp cover was painted by Walter Baumhofer and the haunting and beautiful paperback cover is by James Bama. The interior illustrations are by Paul Orban. This is one of the rare cases where the painting of the Baumhofer cover is available and it is beautiful. 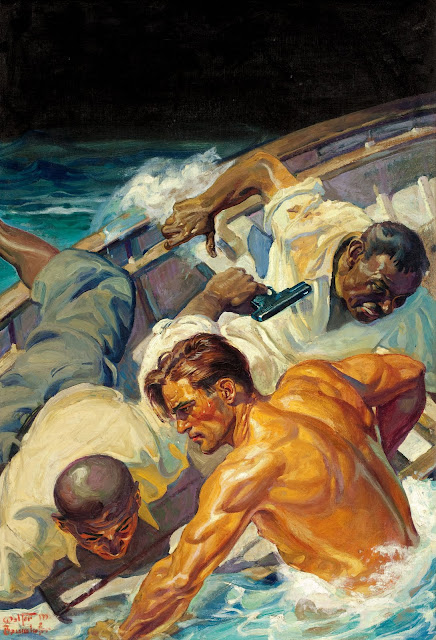