Pulp of the Week - Fuzzy Nation by John Scalzi 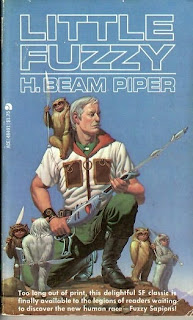 Clearly I waited far too long. I have long been a fan of the Fuzzy series by H. Beam Piper. This SF adventure series follows the travails of Jack Holloway and his multiple discoveries on the corporately owned planet Zarathustra.  I have long thought about adapting and updating this public domain series into a screenplay.

Piper's original evolves into a courtroom thriller for far too much of the story and I would have liked to add a bit more with Jack and the Fuzzies. Perhaps update the city chase and add some more oomph to the resolution.

There was one thing stopping me. Ewoks. George Lucas threw the Fuzzies under the bus when he made The Empire Strikes Back. Any Fuzzy movie would forever be called an Ewok rip off. I moved on and wrote other things.

Well, John Scalzi clearly had the same idea, with one huge difference. He is a novelist, so he actually wrote the book. 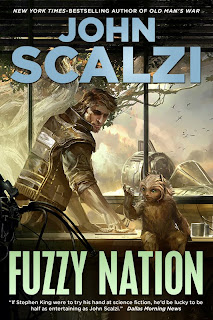 Scalzi's self-referred "reboot" is a good adventure novel covering the events of Little Fuzzy but they are reworked into a modern SF novel. The themes and main beats of the story are all there, but Jack is a good bit younger and the relationships are emphasized more strongly.

The main question at the heart of Little Fuzzy and Fuzzy Nation is, "What defines sentience?" This is important because if the Fuzzies that Jack has discovered are sentient, then the native species will own the planet and the Zarathustra Corp is s.o.l. With trillions of dollars at stake, the corporation is not inclined to play nice.

Scalzi keeps the action of the climax fairly contained - I would probably have gone all Jim Cameron on this and have a huge action sequence as the Corp struggles to maintain control. But Scalzi's approach is far more in line with the original and probably for the best. Jack is a bit damaged goods than I thought was necessary, but his heart finds the right place.

I enjoyed the Fuzzy reboot and would certainly buy any future entries in this series, but on the other hand, I can always just reread the originals.

The Fuzzy series also has a cinematic legacy that includes the previously mentioned Ewoks, but additionally seems very much an influence on Avatar and the early (1970) Burt Reynolds film, Skullduggery, where a miner is put on trial for murdering one of a missing link-like intelligent species in New Guinea.

I give Fuzzy Nation a 7.5 out of 10. The Fuzzy Nation cover painting is by Kekai Kotaki. The Little Fuzzy cover is by Michael Whelan. 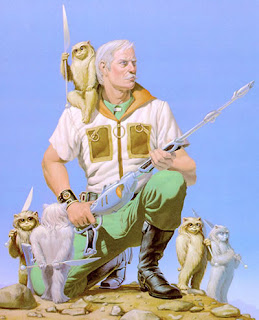