Pulp of the Week - Honey in his Mouth 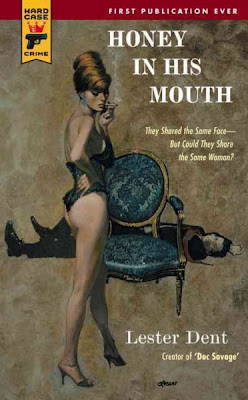 Written by Lester Dent
Lester Dent is most famous for writing the bulk of the Doc Savage novels, starting with the first in March 1933 and continuing on to the last one published in the summer of 1949. He also had many other stories published in the pulps. But he had always wanted more and after Doc Savage Magazine ended its run he continued to write.  One of the those things was a novel written in 1956, but not published until long after his death.
Noted Doc Savage novelist, and official Lester Dent file searcher, Will Murray came upon the manuscript and Hard Case Crime published it in Oct 2009. Two years later I finally got around to reading it. I wish there were more lost Dent novels.
Among the things that Dent learned to do while writing a few million words of Doc Savage was to write action effortlessly, and to create a character in just a few words. In Honey in his Mouth, Dent creates Walter Harsh - not quite a grifter, but also not quite on the up-and-up. Harsh had figured out a scheme where he would take portrait photos of people and then get them to buy prints of the pictures, and there are always more pictures that the people might want and they cost more than they were expecting.
Walter also happens to have a girl - Vera Sue Crosby. She is a piece of work and is ready to leave Walter when he suddenly is approached by a group that wants to pay Walter $50,000 to make like he is the El Presidente of a small dictatorship. It seems that Walter is the dead ringer for the dictator.
With that set up, Dent sends Walter and Vera Sue on an scheme that spirals from simplicity into complete chaos. While the book is not Pulitzer material, it is a taut thriller and a heck of a lot of fun. Dent writes just enough good in Walter that we root for him as he tries to escape his circumstance, but just enough bad to keep this a crime novel.
I liked Honey in his Mouth enough to give it an 8 out of 10. The cover painting is an original for the book and is painted by Ron Lesser.
.
.
Posted by Pete Miller at 10:14 AM