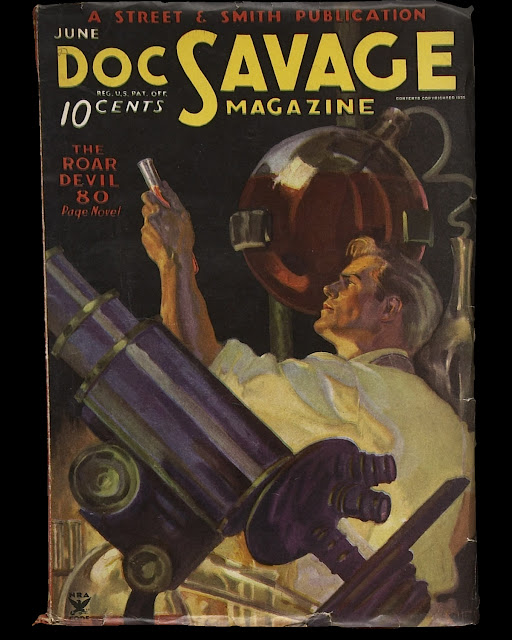 June, 1935 - The Roar Devil
The Roar Devil fits right in with this recent group of Doc Savage novels where an astounding device is being used by a criminal gang to steal vast amounts of cash. Here, the gimick is a machine that causes earthquakes and another that silences all sound. The descriptions of the soundless world are quite good and raise the book up a level.
There is another standard Doc Savage adventure fixture in this novel as well - the plucky girl. However, this particular girl, Retta Kenn, is a standout and such an enjoyable character that she raises the story up even more that The Roar Devil's outlandish (and as usual, unexplained) premise.
Here, Retta Kenn meets Renny...
His long arms gathered her in. His big right hand clamped over her gun. She surprised him. He had fought me, more times than he could remember. Few of them had equalled this girl. She must have been an avid exponent of physical culture. She knew something of jujitsu, too. She kicked him and hit him with terrific force. They were both on the floor before Renny got the gun and that was something he would never brag about, because he considered his own strength by no means ordinary.
"Holy Cow!" Renny puffed, and got to his feet. "Talk about your wildcats!"
The girl was up like a shot and nearly demonstrated she could outrun him. He caught her fifty yards from the cabin. She knocked him down once, beautifully, something he would have sworn that no woman could do.
"What'd you come up here looking for?" he demanded.
"Nuts to you!" said the female fire-eater.
Retta Kenn proceeds to break out of the bonds he ties her in, kicks the hide off his shin, and "gave him a marvelous black eye."
Retta Kenn is, for my money, one of the great supporting characters in the series so far and one of the main reasons I liked this novel as much as I did. 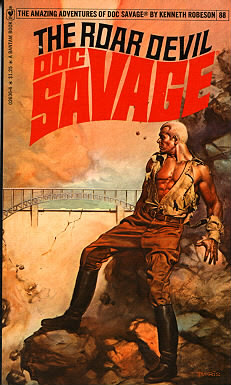 I read my Bantam paperback, bought new, May 1977 with a great cover by Boris Vallejo. The Pulp cover is by Walter Baumhofer. I'll give The Roar Devil an 8 out of 10.
.