Pulp of the Week - Ganymede by Cherie Priest 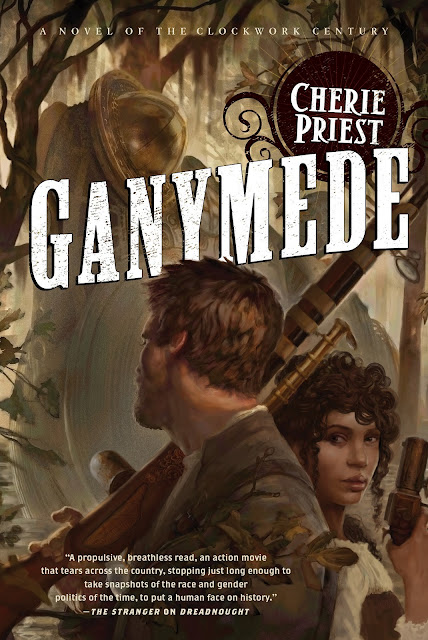 Author Cherie Priest returns to the Clockwork Century in her new book, Ganymede.  This marks a glorious fourth book in the series. In Ganymede, Priest turns her eye again to Andan Cly, the airship Captain, and sometime pirate, introduced in the excellent novel Boneshaker. If you have not read Boneshaker, go buy that book, read it, then read Ganymede.

In this adventure, Captain Cly is trying hard to escape his pirate ways. He gets a mysterious offer from an old flame from New Orleans, Josephine Early, who is in need of an airship captain. But Cly is looking to settle down a bit in Seattle, finding himself attracted to the local Sheriff (remember the end of Boneshaker?), but decides to take the offer which when finished will allow him to pick up a load of supplies that Seattle desperately needs. Cly and crew take his airship to New Orleans, but as it turns out, Josephine doesn't need his ship at all. She wants Cly and his crew to pilot a captured ship prototype and deliver it to the Union forces. She is hoping the new ship's capabilities will bring an end to the war.

New Orleans is a city occupied by the Texians on behalf of the Confederacy. Rebels are fighting this occupation, but the battle is tough and Texas is looking to rout the rebels from their hideaway in the swamp. Josephine and her brother are part of the rebels.

I loved the interplay between Andan Cly and Josephine Early. They have the tug of lost love and the reality of the now. Can the flames rekindle, or not. Josephine runs the Garden Court Boarding House which is better known as "Miss Early's Place" and the home of "Miss Early's Girlies." Josephine is a great character; tough, sassy and vulnerable. The scenes with the two of them are outstanding.

The novel is chock-a-block with other great characters, some new, some familiar. There is Ranger Korman from Dreadnought, Josephine's rebel brother Deaderick, a few of the "Girlies", Airship Naahmah Darling crew Huey and Fangand, and mysterious voodoo priestess, Marie Laveau. Rest assured, there are rotters here, their presence has spread to the bayou, though the locals call them zombis (not a typo) not many of them are convinced of their reality. Hardly anyone knows about or believes the zombis exist.

There are air pirates and sea battles, and tons of inventive adventure in between. I loved this book and will not spoil it in this review (as usual). Cherie Priest has delivered the goods here and I look forward to further books in the series.

The cover once again is by Jon Foster. He has done all four books in the series.