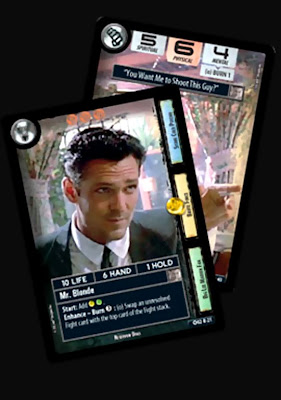 There are two happenings in the world of Fight Klub this week. First off, the Friday gameplay spoiler reveals more about Fight Cards. The Founding Mentors were also revealed. Not to blow the suspense, but I'm in!

So when you buy Fight Klub, remember Spike sent you.

Last week I discussed the Fight cards and Skirmishes. Well, this week they revealed a little added wrinkle. The type of Fight cards discussed last week are called Power cards. There is at least one more kind of Fight Card. This week we learned about Clash cards.

Clash cards, like Power cards can be just for your character (Signature) or for anybody (Global). You may have up to 3 Clash cards in your Fight stack. They can be all the same card, or different cards. Clash cards work completely differently than Power cards. There are no numbers to compare on them. Clash cards win you the fight based on conditions printed on the Clash card. The example given is, "The player with the most cards in hand scores this Fight card." The Clash cards each have their own conditions to win that Fight.

Clash cards trump power cards, so the player that meets the conditions on the card, wins the Fight. You would try to set up your deck so that you would be the likely winner, but events may trigger the opponent's victory.

When 2 Clash cards are played, the player with The Drop gets to decide which Clash card's conditions are used. Again, control of The Drop is important.

I am very encouraged by all the tidbits leaked so far. The rules leaked so far make me think that the fights will be fun to play out and are not anything like a dice fest or a bunch of dry mechanics. the Fight cards will be flavorful and exciting. Just when you think you've got your opponent on the ropes, they hit you with the "Feel Lucky, Punk" card and Dirty Harry plugs you. Or the "Bitch" card and Ripley bitch-slaps you across the cargo bay.

Fight Klub game designer Tim Ellington also dropped another hint in a post. He said that in addition to the known Fight card types (Mental, Physical, Spiritual) "there might be one more. I can’t remember. Is there a fourth one? I think there might be a fourth one every once in a while…"


I'm psyched up for Fight Klub!

I hope that Decipher gets Fight Klub out for the summer convention season, but I think it may be fall...

Fight Klub and all related images are trademarks of Decipher, Inc. All Rights Reserved.
Posted by Pete Miller at 5:07 PM