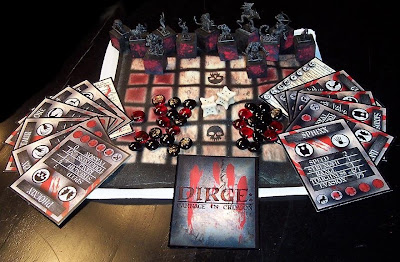 John Clowdus first came to my attention as a brilliant contributor to the Custom Army Card section of the Heroscapers.com website. He created numerous high quality customs and held the long-running and very popular "Speed Customs" contests.

John decided to break out on his own and started his own company, Small Box Games. 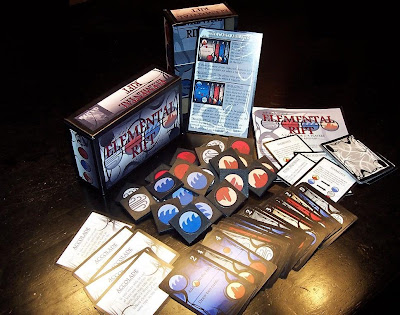 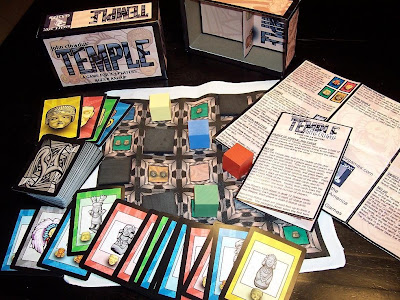 Do you have a profession outside of making and selling games, or have you transitioned into just selling games?

I still have a full time job in real estate, which is terrible right now. I’d love to move into games full time, but I don’t think I’ve quite established myself, or Small Box Games quite enough to take that plunge. If this year continues this well, it is a possibility.

Where did you grow up? Did you play a lot of board games or rpgs? Where did your love of hobby games come from?

I didn’t start gaming until I was thirteen, when I saw an advertisement for Fallen Empires, and thought it looked pretty cool. I played Magic, off and on, for 10 years. I haven’t bought cards in a long time, but we still play crap rare draft, mental magic, and old block draft whenever I get a chance. 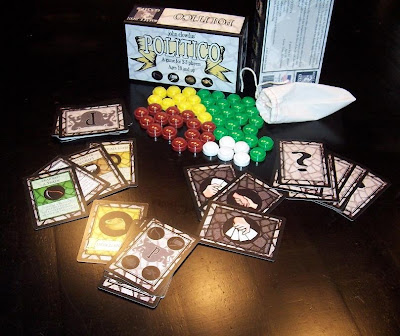 Politico, your first release, did quite well with BGG readers, ranking 8.0 out of 10. That's a great start. When did you start designing games?

I started seriously designing games around two years ago. I’ve always liked making things, and with board and card games, everything just sort of came together. There’s so much room in board games to push your creativity. With any game I’ve ever seriously been into, I’ve always wanted to customize something about the game, add my own touch. Heroscape was a great outlet for that.

What was the factor that pushed you to make and sell your designs?

The realization of how difficult it is to get your games picked up by publishers when you’ve never been published before. And even if they do like your game, it takes a while for it to get published. This just seemed like a smarter way to do it. Plus, I wanted to try to run my own business. In the end though, it was my wife, Britt, who really pushed me to start my own company. Things are going really well, so far. I can’t complain.

Have you tried to get established publishers to buy your designs? How close did you get? Is there an experience you can talk about?

I submitted games when I first started seriously making games, for around six months, I tried to get a few games picked up by publishers. I had a few close calls, but in the end, nothing worked out. It’s really, really tough to make your way into games. A lot of publishers here have their own in house stuff, and the others publish things that are already successful overseas, so it makes it hard to even get your game looked at, because there is just some much already out there from established designers. At least, that’s my perspective.

Your other games have a very 'Euro' feel to them, but Dirge is a bit different. After all, it is a combat game, isn't it?

Yes, it’s a combat game, definitely. But, it’s not a dice fest. All of the figures deal a set amount of damage. That damage is reduced by the attacked figures’ toughness. But, each figure’s toughness is different on each of its sides. Some figures can’t kill other figures unless they attack them from the back. There is a touch of luck, though, through the evasion stat. Most figures have an evasion value, that allows them to roll a die when they’re attacked, and if they meet the requirement, they dodge the attack. 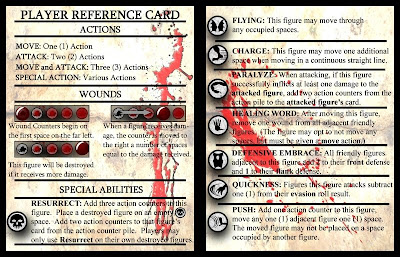 Dirge has cards, miniatures, and a cloth gameboard. How much will all this cost?

How many players will Dirge accommodate?

Dirge is a game for two players.

How long do you expect a game of Dirge to take?

Around 30 minutes. Given, there’s a bit of a learning curve to that number. The first few games may take a touch longer, as players get to learn what all of the figures do.

When does Dirge release?

Do you have more games in the pipeline? Anything you want to tease?

Yeah, we have lots of stuff in the pipeline, and I’m constantly making new games. We have two Euros slated for next month (hopefully). One is a tile based civilization building game that I think is going to go over really well with the light Euro crowd. After that, we have two more miniature combat games. Totally different from Dirge and each other.

I just want to thank everyone who helped get this started. Small Box Games is pretty much a one man show, and without the fans it would have been tough to get this thing moving. I look at some of the other small publishers, and I’m really amazed how well Small Box is doing, and I totally owe that to the people who took a gamble on a small company and purchased our games. Thanks.