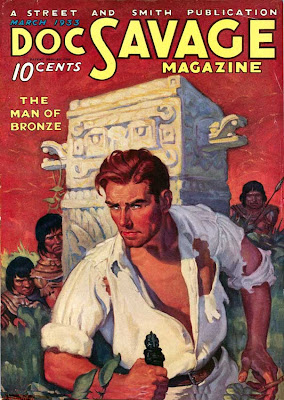 March 1933 - The Man of Bronze
It may be apparent that I am a fan of the Doc Savage character and the series of super-sagas originally published from March 1933 to Summer 1949. 181 issues. That is not a record for pulp characters (the Shadow ran for 325 issues) but that is a lot of stories featuring one character.

Recently I realized that I had not read a Doc Savage novel since, well, before many of you were born. I couldn't remember how far in the series I had read in my youth (book 70ish), so I decided to begin again with the first issue. If I read one a month, I should be able to finish them all in 16 years or so... 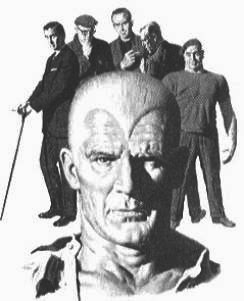 Clark Savage, Jr. was created by the publishers of The Shadow working with writer Lester Dent. The Shadow was a big hit and they were looking to create another. Doc was designed to be an unabashed good guy. Created in the Great Depression, Doc symbolized the hopes and dreams of many young men. He was smart, handsome, strong, fast, and rich. On the covers of the original pulps, Clark Gable was the visual inspiration for Doc.

Doc is considered by many to be the first super-hero. He is superhuman; but just barely. He is a little faster, stronger, and smarter than almost anyone else. His courage and confidence are unmatched.

One of the things that I really like about this story is that even though this is the first issue of a 181 episode series, there isn't a lot of exposition. The components for the series are already there. The characters have a life together, a history. Doc and the fantastic five, his group of friends from the Great War, are already a team. Clark Savage, Jr. is already Doc Savage. He and his friends already have deep bonds.

Doc's father was responsible for the offices on the 86th floor of an unnamed building in Manhattan. Doc and his friends have already had a number of adventures. However, in this first story, they become the group dedicating their lives to Doc and his mission. We could do far worse than to live by his ideals.

The Doc Savage Motto
"Let me strive every moment of my life to make myself better and better, to the best of my ability, that all may profit by it.
Let me think of the right and lend all my assistance to those who need it, with no regard for anything but justice.
Let me take what comes with a smile, without loss of courage.
Let me be considerate of my country, of my fellow citizens and my associates in everything I say and do.
Let me do right to all, and wrong no man."
This first issue is where the never-ending battle begins. This is where Doc steps out of the shadow of his famous father and onto the path he has trained his whole life to walk. He has performed a daily training regimen his whole life; two hours of grueling isometrics, mental exercises, and sensory challenges.

This first novel in the Doc Savage saga sets up the series nicely. Doc arrives in New York to meet with Clark Savage, Sr, his father. He arrives too late; his globetrotting adventurer father has been killed by mysterious means and a sniper-rifle toting Mayan means to kill Clark, Jr. next.

There is a terrific chase in the scaffolding of a skyscraper under construction that leads out onto the streets of Manhattan. Then we witness a taste of the scientific methods Savage employs. Clark's father has left a mysterious note (visible only by ultraviolet light) and some papers giving young Savage title to some Central America land in the small republic of Hidalgo.

Savage and his men travel via one of Savage's private planes:
"The approximately 900 mile flight to Miami they made in something more than 5 hours, thanks to the tremendous speed of Doc's superplane."

Doc and his men travel to Hidalgo, a small Central America republic. Here Clark seeks out the answers to his fathers mysterious legacy in a secret valley. Hidden by savage terrain, accessible only by air, the Valley of the Vanished holds all the secrets Doc is seeking.

I had forgotten just how good Lester Dent's writing is. Doc is not an emotionless automaton, a man without feeling. Rather, he is a man of morals and high ideals. He deals with logic to solve his problems, but shows a bit of emotion, too. He embraces adventure, accepting the danger but using everything in his power to mitigate that danger. He is not without feelings or attraction to the ladies; but he knows how dangerous his work is and chooses to avoid romance.

This first yarn is full of exciting scenes. Doc and his men chase a Mayan assassin up the scaffolding at the very top of the Empire State Building. A beach side shootout with a sniper shooting holes in the pontoons of Doc's plane. There are chases and deadly traps and escapes from certain death. We meet the good Mayan King Chaac and his lovely daughter Princess Monja who has eyes for Clark, Jr. There is a surprising amount of story for a 120 page novel. Mind you, this is not Pulitzer winning prose, it is Pulp at its finest. The characterization is not deep, but we start to see who these people are.

I am so glad I decided to start at the beginning because there is so much I had forgotten from reading this in my teens.

For this review I read my copy of the Bantam paperback - 7th printing circa 1973. For some unknown reason, the Bantam paperbacks and the 2-in-1 reprints do not follow the original publication order. I would recommend reading the stories in their published order.

I highly recommend the Doc Savage stories. You can find the reprints from Nostalgia Ventures at Barnes and Noble or at Ebay and used book shops all over the internet. On Nostalgia Ventures online store they are having a special deal where they will send you 1 (random) slightly blemished issue for the cost of shipping. 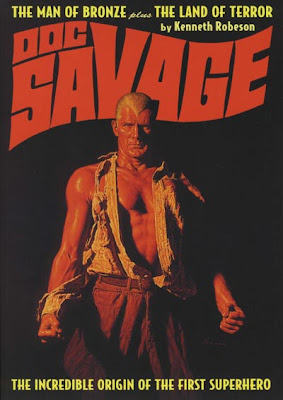 The Nostalgia Ventures Reprint Front and back cover of Issue #14 (containing Pulp issues #1 and #2). 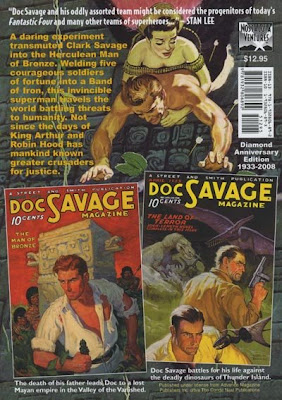 I have also recently discovered a fun gallery of Custom Doc Savage Bantam Paperback Covers by Keith at Monsterverse. Here are a few of my favorites: 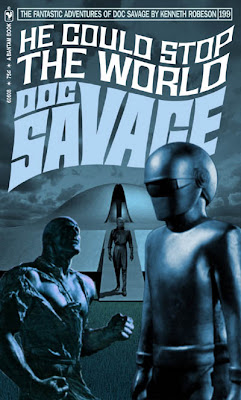 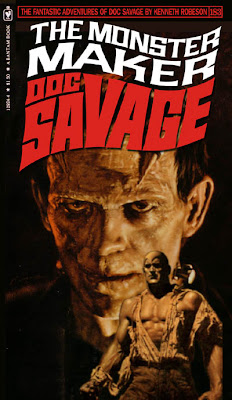 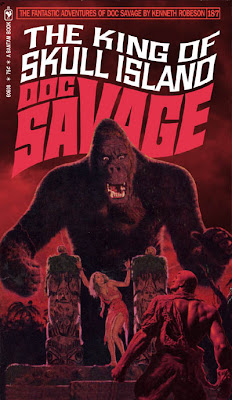 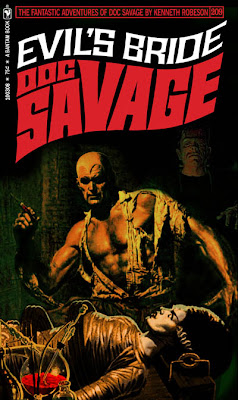 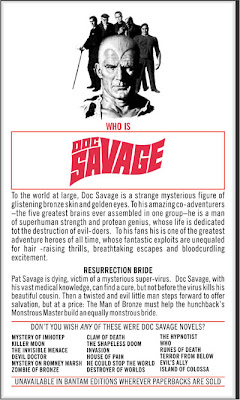 As you can tell from my Doc Fantasy covers, I'm a huge Doc Savage nerd. And I'm also reading the series anew myself not only in publication order, but in submission order, which can be found here:

I think I'll follow suit on that and read them in the submission order.

Thanks for that, Kez!