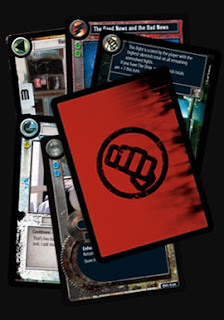 Fight Klub is the game that will answer the question -

"Who would win in a fight between Sarah Conner and the Alien?"
or
Rambo vs Judge Dredd - Stallone finally finds his match - himself
King Kong vs Hellboy
Ash Williams vs Jason
Chucky vs Godzilla

Decipher is taking a bold chance on Fight Klub. Every aspect of a CCG is being reexamined for this release.

Sales Model - More Tupperware than Magic the Gathering, and sold through the Decipher's web site. To buy Fight Klub you will have to enter the name of a "Mentor". That person will get a quarterly payment of 10% of the sales of their buyers. Decipher calls this "10% for Life."

Play Model - 40 card decks. 1 rare, 3 uncommon, 3 common MAX per deck. With a pool of cards for each set 30 rare, 30 uncommon, and 40 common if you have folks to trade with you will only need to buy 3 packs per set. At $35 (including shipping) per pack you need to spend $90 to get enough rares to trade for a set. They say they will also be having a monthly subscription service.

Set One and Two release at the same time. "The One" a special release with each pack containing 1 each of 120 cards plus a special card called "The Drop". The player that holds "The Drop" chooses who plays first in each phase of the game.

The following expansions will be released quarterly.

The players will get to vote for what characters are in the expansions. There are going to be 8 characters per expansion.

All of this sounds great to me. I have applied for Founding Mentor status to get in on voting for characters and having a say in the game play. I want to play Ripley in the Powerloader fighting The Terminator or a Predator. I love mixed universes - see Hellboy, Heroscape, and the Marvel/DC Crossovers...

Decipher has big plans, so if you decide to get in on the action, remember me, Spike, when you order.