Yesterday I presented the Hermetic Scientist, Krisztov Moeller, and his backstory. Today I present some scenario ideas and the Rüstung Fallhammer card.

Use the Castle Ruins side of the board. This represents the catacombs under Ksiaz Castle. Players take turns choosing sides - Reich, Union, Matriachy, or Moeller's Hermetics. If no one picks the Hermetics then play the Doktor's forces with the solitaire rules, with the players rolling for control each Game Turn. 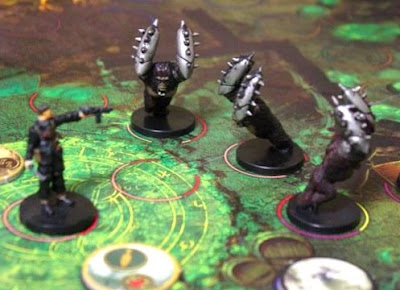 If no player is controlling Moeller's forces, all the players roll a d10. The winner gets to place all of the tokens for Doktor Moeller's forces. (There will be a set of tokens - 1 for each Hermetic figure and 3 different tokens representing Moeller's Research Papers. There are also 8 dummy tokens.) Set the tokens up in the central chamber. The player putting out Hermetic tokens should not look at them, mix them up, and then place them anywhere in the central chamber, Moeller side face up.

If a player is controlling Moeller's force, then that player may choose the placement of the Hermetic characters in the central chamber at their discretion.

The remaining players roll a d10, and the winner chooses their army's entry point. Players keep rolling until all entry points necessary are determined. Use the 2 official entry points. In a 4 player game a third entry point will need to be chosen in a corner where there is no entry point. The circle closest to that corner may be used.

PLAY
If a player is using Doktor Moeller's Hermetics, play proceeds as normal. If there is no player for the Hermetics, use the Solitaire rules below. The Hermetics are trying to escape capture to score Victory Points. Escaping with the papers increases their Victory Point total.

CAPTURING
Some of the Hermetics can be captured. If the Rüstung Fallhammer or the RUR 07 are injured or damaged, they can be captured. An adjacent Hero may attempt a capture. Two or more Heroes may combine their efforts.

The RUR 07 rubble token may be captured automatically. No roll is needed.

CHARACTER DEATH
When a figure dies, place a character token in the space where they died.

VICTORY POINTS
In addition to the normal Victory Points awarded, in this scenario you may gain VPs from performing certain actions. Only the human Hermetics may score the Victory Points for Moeller's papers. The others may not pick them up.

SOLITAIRE PLAY
If there is no player controlling Moeller's forces, they remain face down until an active player's figure has entered a pathfinding with a Moeller Token on it. That figure stops moving immediately, and its turn is ended. The token is revealed. If it represents a figure, replace the token with the figure. The figures react as follows: 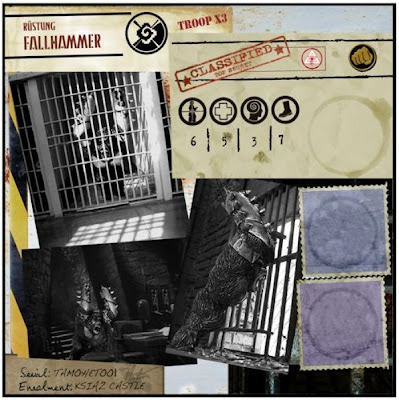 Rüstung Fallhammer were once simple lowland gorillas, but after being subjected to Doktor Moeller's experimentation, they are now vicious killers. There are 3 of these roaming the castle catacombs.

«Armored Bracers» - If an ape attacks the same figure it attacked the turn before, it gets to roll an extra attack die. The Bracers provide an automatic block of 1 wound from any attack, including grenades.

«Ferocity» - At the beginning of their Sequence, if on the same path as an enemy figure you must roll the die. If the result is an 6-10, the apes must charge and attack the nearest enemy. The apes may move an additional 2 circles if needed to reach that person.

My custom additions to Tannhäuser are not created by, distributed, or endorsed by Take on You, Asmodee, or Fantasy Flight. Tannhäuser and all related characters are trademarks of Take on You and © Take on You LTD. All Rights Reserved.
Posted by Pete Miller at 12:11 PM