Every day this week will feature a new Tannhäuser custom character!

I have created a complete custom faction with scenario guidelines for Tannhäuser. Every day I will put up a new character and their available items. I look forward to player input and to hear what people think of the faction. 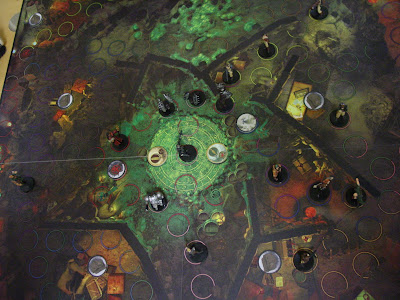 Deep inside Reich Territory, German/Polish scientific genius Doktor Krisztov Moeller works secretly, desperately close to a treatment that would boost intelligence. He has been working with primates for years and has made good progress. The trouble is, the treatment also boosts aggression.

Doktor Moeller originally set up in Książ Castle for secrecy and security, but while clearing rubble in the forgotten catacombs beneath the castle came upon the ruins of an occult temple. Upon reading some of the arcane texts discovered there, he gained unnatural insight and began combining the Hermetic with the scientific. Moeller has swiftly made amazing strides in his research. He has recently begun using himself as a research subject. His love, Lady Fürstenstein is worried, but fully committed to him. Before meeting Moeller, spent time in the far east and has hidden skills of her own. She will fight to the death protecting him. 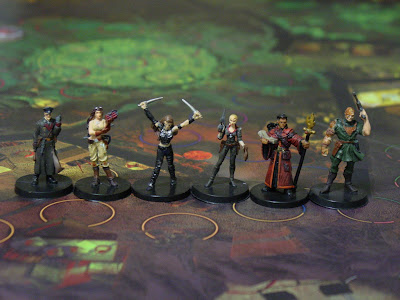 The Obscura corps finally caught hold of some whispers in the wind. Agents in the outre division had a visit with Doktor Moeller, but found nothing. They know he is keeping secrets from them, but even their sensitives couldn't get a good reading on him. Obscura agents have been following him for weeks and couldn't help but notice his attentions on a certain young lady at Książ Castle. Moeller would often disappear into the castle for days, only to appear again, already outside the castle, going in again.

Word has come from Obscura Headquarters to locate those secret entrances to Książ Castle and find what the good doctor has been hiding.

The Russians have also got wind of Moeller's work and the Union intelligence branch intercepted some Russian comuniques and decided there was no time to waste. The Russian and Union commanders have taken swift action, paradropping commando units into the countryside near Książ Castle. 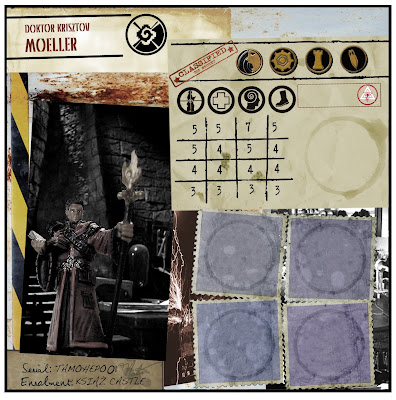 Special Object - Staff of Storms - Choose an adversary located on Moeller's path. A Mental Duel is declared. If Moeller loses, there is no effect. If he wins, all the victim's Disposable Equipment is moved off the Character Sheet to the last circle of the path.

Book of Hermetic Science - The All Seeing Eye of Terror - The Eye of Terror allows Moeller to see many nearby figures and attack them.
Choose an adversary located on the Moeller’s Path or a Path connected to Moeller's Path. A Mental Duel is declared. If Moeller loses, there is no effect. If he wins, the victim is terrorized and receives as many wounds as Moeller rolled successes plus 1. However, the victim may reduce the wounds by the number of their successes.

Book of Hermetic Science - Animate Corpse - When a figure dies, place a character token in the space they died. The user of the Book of Hermetic Science, when adjacent to a figure token, forfeits their Movement Phase to attempt to Animate the Corpse. If Moeller wins a Mental Duel against the dead characters highest Mental Value, you may immediately use a Sequence with that figure (re-equipping all Disposable Equipment that is in the same circle as the figure).

Book of Hermetic Science - Spontaneous Resurrection - Discard this token immediately if Moeller would die. Moeller does not die, but his Health Indicator is placed on the last row of his Character Sheet. If he has not yet been activated this Game Turn, you can activate him and play his Sequence normally.

«Mauser C96» - Type: Close Combat Weapon • During a Combat Roll, the Mauser’s precision adds a 2-point bonus to the result of each die (except Natural 1s).

Surgeon - Discard this Token to have Moeller heal a wound on himself or on an adjacent friendly figure. You can use a Victory Point to heal an additional wound.

Robotic Repair - Instead of playing his Sequence, if Moeller is adjacent to the RUR 07 Rubble Token, you may swap the token with the RUR 07 figure. The RUR 07's Health Indicator is placed on the last row of his Character Sheet. If it has not had a sequence this Game Turn, it may take one.

I will update with new stuff as it is created. I have not made the character tokens yet. If there are any volunteers they will get done much faster.

My custom additions to Tannhäuser are not created by, distributed, or endorsed by Take on You, Asmodee, or Fantasy Flight. Tannhäuser and all related characters are trademarks of Take on You and © Take on You LTD. All Rights Reserved.
Posted by Pete Miller at 2:14 PM