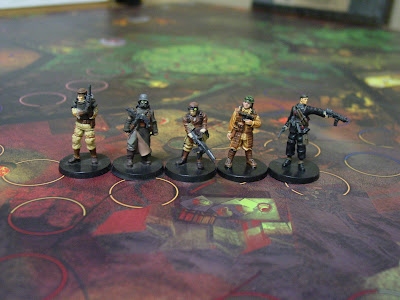 Jackal aka Matthäus Lang was a Fallschirmjäger (Paratrooper) in the Reich Luftwaffe until 1947, when he deserted while on a mission on the eastern border of Reich Territory. He discovered a cache of plundered art and antiquities and set off on his own at that moment. He disguised a disfigured corpse in his own uniform and left his ID behind. Of course, like most rogues, he soon blew the money on booze and dames. Lang has been a private operative and soldier of fortune ever since. The Jackal has been on Moeller's payroll for some time and has grown quite loyal. You may also play Jackal as a Freelance Operative recruited in the same way as Wolf. 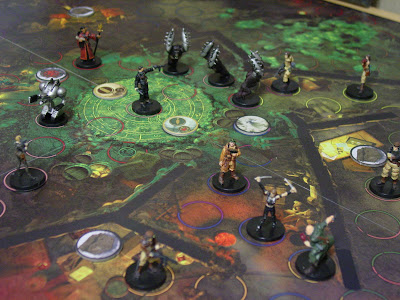 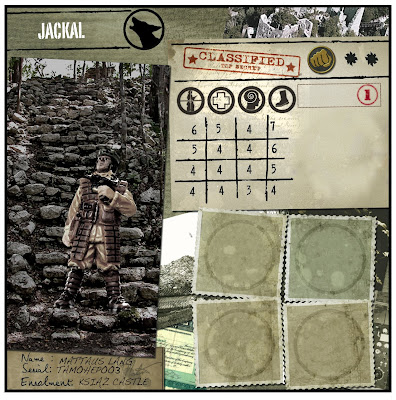 The Garrotte may only be used if you just moved onto the target's path this Sequence and never if the target shared a path on their last Sequence, unless the Jackal was hidden from its victim due to the use of Stealth.


Stealth - During his Sequence, if Matthäus ends movement on a multicolored circle, he can choose one of those colors. Only figures on that color path can see Matthäus, but he can still see all colors on his path. When they are on a path affected by smoke, figures attacking Matthäus suffer an additional -1 to their Current Combat and Stamina Values.

After attacking, the Stealth is no longer in effect.

Dexterity - Matthäus may take an additional Action Phase. He still only gets up to two Movement Phases. He may only attack one time per Sequence.

First Aid
When you use a Victory Point to heal a wound, the First Aid Kit allows you to heal an additional wound. Discard the token after use.

Submachine Gun Pistol
Type: Automatic Weapon • Thanks to its rapid rate of fire, the M3 provides a 1-point bonus to the Current Combat Value of its firer.

Extra Ammunition
After a Combat Roll, if the results are unsatisfactory, your character may make a rapid reload in order to roll a second attack. Only the results of the second attack are taken into account.

You may not use Extra Ammunition during a Counterattack. Discard the token after use.

The figures used for the Moeller's Hermetics faction are:

My custom additions to Tannhäuser are not created by, distributed, or endorsed by Take on You, Asmodee, or Fantasy Flight. Tannhäuser and all related characters are trademarks of Take on You and © Take on You LTD. All Rights Reserved.
Posted by Pete Miller at 4:51 PM