Tannhäuser Tuesday - Token of the Month

Welcome to the first U-Chronic Token of the Month. The first Tuesday of each month, Savage Tales will feature a different unofficial Tannhäuser token. To launch this feature I've written up some brief tips on mounting your own tokens that are virtually indistinguishable from the game tokens that come supplied with the boxed Tannhäuser game. So without further ado, let's take a look at our first token: 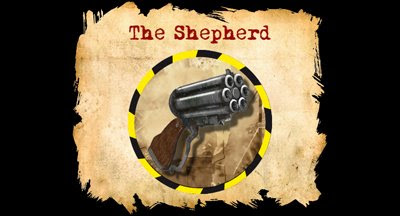 The Shepherd is very much influenced by Hellboy - it's his "big gun" with the serial numbers filed off, so to speak. It's usable by anyone in the Union, but was designed with Barry Daniel Brown in mind. It makes up for some of the range restrictions of the Flash Machine Gun which some players found problematic. It cannot however, replace Barry's special item, as per standard Token Of The Month rules. The Shepherd is a bit of a hybrid of the Flash Gun and the Trench Gun, in regards to its game effects. Its ability to push opponents around, and its sanctified nature, give it its name. 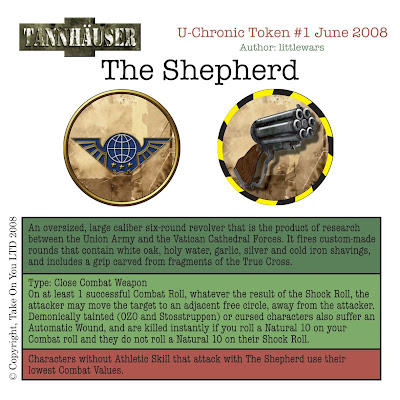 The Shepherd's insta-kill ability effects demonically tainted characters, specifically Karl "OZO" Zerman and the Stosstruppen. Due to the nature of the weapon it should have an effect on other types of characters that we have not yet seen in Tannhäuser. I tried to make the write-up as brief as possible so I included that it works on "cursed characters". So if you are up against a new adversary, either official or custom, consider adding the following terms to your Tannhäuser glossary:

Demonically Tainted: Entities from the Lower Worlds. This includes characters possessed by such entities.

Cursed: Characters suffering from a supernatural curse such as Lycanthropy, Vampirism, or the Undead.

So if you're facing a werewolf - check, it works. Squaring off against a character imbued by the power of an ancient slavic deity - nope, that's a blessing, not a curse. Whatever you do, make sure the players agree BEFORE the game that The Shepherd effects a given new character.

Mounting Tannhäuser Tokens Of The Month

One problem faced by Tannhäuser players is mounting the various Tokens Of The Month in a way that matches the existing components. You will need a few common things: a print out of the Token you wish to mount. A sheet of standard cardboard stock and white glue. 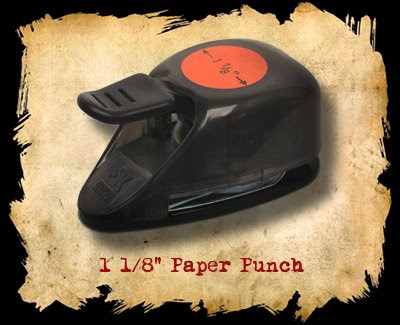 You will also need a 1 1/8" circle paper punch. These are available for anywhere from six to ten dollars. I found one online, but they are also available at craft stores. The full name of the product is Paper Shapers Nesting Punch manufactured by EK Success. Tannhäuser tokens are actually 30mm so it's about a millimeter off - pretty much unnoticeable.

Punch out 2 or 3 circles (I use three) out of standard cardboard stock (say, like cereal box thickness) and glue those together with white glue to achieve the thickness of a standard Tannhäuser token. Use as little glue as possible, just enough to cover the surface. If you use too much it will ooze out the sides and cause the cardboard to warp. Once the "centre" is glued, set it aside to dry. Next punch out the print out of the tokens you wish to mount. Again, apply as little white glue as possible and apply the two images to either side side of the cardboard centre. Voila - almost indistinguishable from the real deal!

The big news right now is Tannhäuser Field Ops, the new card game from Take On You. The game previewed at a Tannhäuser event last weekend. A work in progress card was released online and Malechi at the Fantasy Flight forums has done an English mock up. 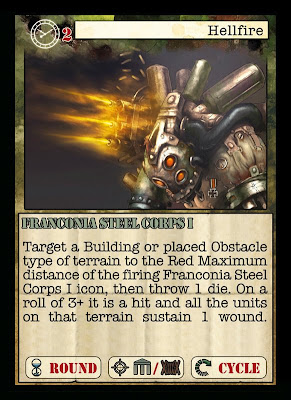 Here is the official one 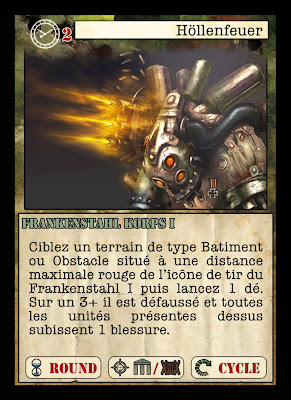 Some players have posted reports of the demo on the French boards. This report is based mostly on the work of Kovax, Watchman, and Ligle. This seems to be a non-collectable card game with about 100 cards. There are dozens of the character cards to represent different versions of the main character (the different build packs) plus a "Legend". The demo included a "Legend" for the Union side - Major General James Edison, the son of President Thomas Edison. There is also a Mercenary "Legend". There are also cards for buildings and other fortifications.

Each team will get 4-5 personalities, Union and Reich in the base game. There seems to be ruler based range - perhaps similar to Wings of War - and some kind of maps. There is Deathmatch mode and Story mode. There is a bluffing mechanic involving the activation of troops. (Heroscape-ish perhaps)

The demo left people excited for the game.

I think that we can expect to see more of this in the near future as the French boards said folks at the event took pictures and video. I looks forward to those being posted!

These custom additions to Tannhäuser are not created by, distributed, or endorsed by Take on You, Asmodee, or Fantasy Flight. Tannhäuser and all related characters are trademarks of Take on You and © Take on You LTD. All Rights Reserved.
Posted by Pete Miller at 11:49 AM