The Green Lama NOW on AMAZON!

Yep, you can now buy The Green Lama Volume One at AMAZON.
Posted by Pete Miller at 1:30 PM No comments: 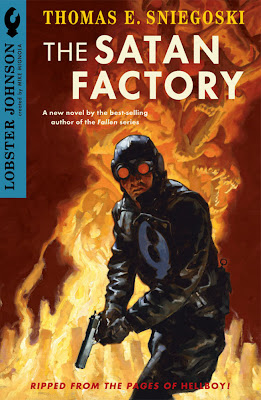 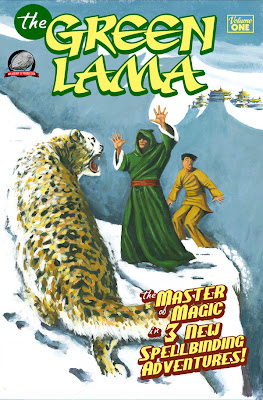 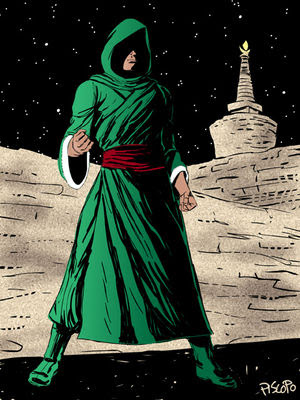 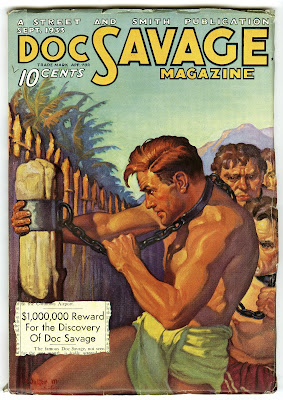 September, 1933 - The Lost Oasis
Zeppelins. I like Airships and this time around we get a Zeppelin. It takes a while to get to it, but this is an above average adventure and has much going for it. The story opens with all the newsboys yelling to everyone in New York that someone is offering a million dollars to meet Doc Savage. Needless to say, this gets the attention of Doc and the amazing five and soon enough Doc is embroiled in adventure.

There is a passage early on that discusses Doc's relations, or lack thereof, with the news hounds. They are writing outlandish accounts of his exploits and knowledge, but "... the laugh was on the reporters. This man of mystery, this strange giant of bronze was a personage every bit as remarkable as they depicted. The truth would have surprised nobody more than the reporters." Doc does not give interviews.

Gadget update: Doc uses a powder sprinkled on the ground that glows when it encounters movement. Doc uses it to track footprints across carpet and even wood. Long Tom provides infrared goggles and lamps, and a vital intruder detector.

The story involves villains taking Doc and Co. across the ocean to the Sahara, where they are put in chains. One of the evil tools of the villains are large black creatures, strange terrors held in baskets or cages until they are needed. The woman responsible for the reward offer, Lady Nelia Sealing, upon meeting Doc notes his "undeniably good looks" and falls under his spell. Lester Dent has a knack for creating strong female foils for Doc. She is tough under pressure, brave, and keeps a stiff upper lip when she sees there will be no romance with Doc Savage.

Some of my favorite bits are on the Zeppelin, fights where no one dares uses a gun because the airship is filled with hydrogen, Doc cutting his way through the aluminum-painted outer skin, and Doc and Co hiding out in the rigging. The prose is quite satisfying throughout.

Once again the evil forces are defeated and Doc and the fabulous five save the day. I give this yarn a solid 7 out of 10 - I know there are better supersagas to come - but this is a darn good read.

For this review I read my copy of the Bantam Paperback #6, 5th Printing July 1972. 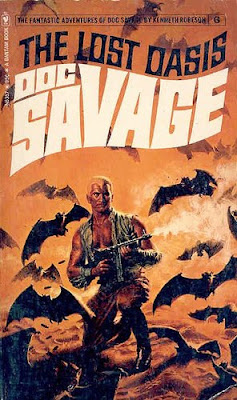 Today in the DC Universe blog there was a tiny bit more about the Batman / Doc Savage Special. Writer Brian Azzarello says, "“Cities are urban jungles– and there’s also unchartered mysterious countries with their own jungles as well. It’s world where you’re guilty before being proven innocent– something that rarely happens. Little people make big mistakes and suffer the consequences. Life is cheap, and everyone has their price. Where part of the thrill of being rich, is watching the poor suffer. Y’know, my kind of place.”

I'm not sure how I feel about that. Hopefully Doc Savage will not be turned into some kind of vicious killer...

Rags Morales is to be the regular artist on the First Wave book. Here is his cover for the Batman / Doc Savage Special... 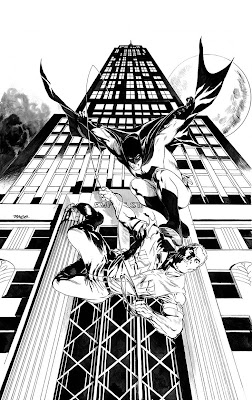 Posted by Pete Miller at 5:54 PM No comments:

Today at The Source blog on the DC Universe official website Alex Segura announced the November publication of BATMAN/DOC SAVAGE SPECIAL #1, which serves as an entry into the DC First Wave universe.

On the blog Segura writes, "This November, writer Brian Azzarello teams with artist Phil Noto for the BATMAN/DOC SAVAGE SPECIAL #1, which sets the stage for an entire new world for the Doc, along with a slew of characters that will pop up later, including the Blackhawks and Rima, the Jungle Girl. It all starts here, and I’m not exaggerating when I say you’re really in for a treat."

I really like Phil Noto's work and I'm eager to see what Azzarello comes up with as well. All of this bodes very well for Doc Savage fans who are eager to see new material with their favorite original "superman."

Segura closes with a tease for tomorrow's blog, "So, allow your jaw to drop at the J.G. Jones cover below. Then come back tomorrow for another treat, plus comments from Azzarello himself." 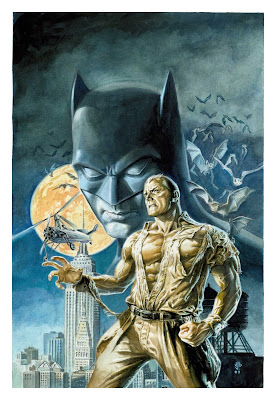 There was Zombieland and 2012 - both featuring Woody Harrelson. Zombieland also stars Jesse Eisenberg and Emma Stone.

Here are Woody, Jesse, and Emma following the panel. 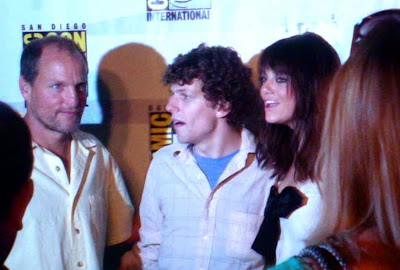 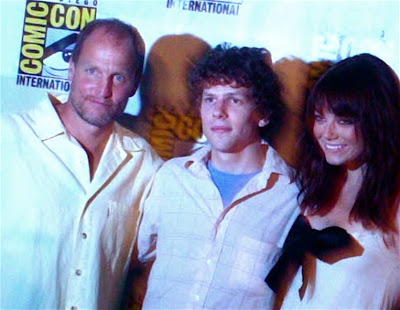 Following the 2012 reel (which featured the "Randy's Donuts" giant donut) was the Iron Man 2 reel (also with the "Randy's Donuts" giant donut - it is an LA landmark). The Iron Man 2 cast present at Comic-Con (from left to right) were Robert Downey, Jr., John Favreau, Scarlett Johansson, Don Cheadle (blocked by Sam Rockwell), and Sam Rockwell. There was much talk of Scarlett's martial arts and stunt training. 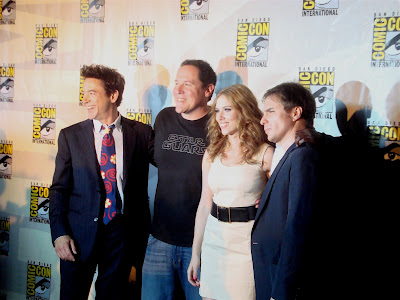