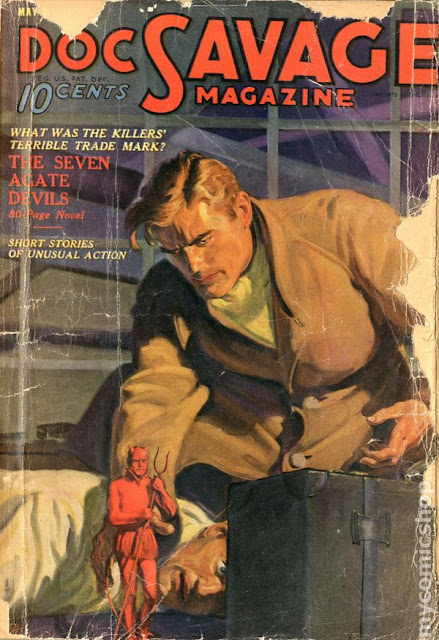 
This Doc adventure has a couple of firsts - Doc in Los Angeles for an extended period and a bald femme fatale. The story involves a series of killings where a carved agate statue is found next to the victim. This is especially peculiar because the statue's face matches the victims.

After racing around Los Angeles and a faux Malibu, Doc, Monk, and Ham go to a movie location far in the desert out by Palm Springs where the trail of the agate statues has led.

This odd and almost great adventure especially suffers from common ailment of a Doc Savage story running out of pages too fast. The authors (Lester Dent and Harold A. Davis) didn't leave enough room for an adequate conclusion.

The story has thrills and chases, Pacific cliffs and western canyon hideouts. It all rushes by too fast and misses many good opportunities. Hopefully Doc and company will return to Hollywood for a proper classic movie studio adventure. This is not that. 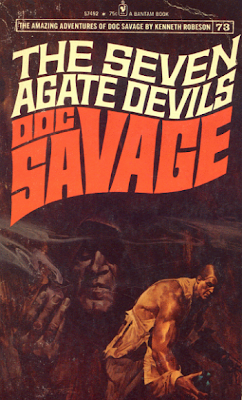 For this review I read the Bantam paperback published March 1973, likely purchased new a few years after that. The evocative paperback cover is by Fred Pfeiffer. I find myself liking the Pfeiffer covers more and more. The pulp cover is by Walter Baumhofer. I got the pulp image from mycomicshop.com. I'll give The Seven Agate Devils a 7 out of 10 - low due to the missed chances and the utterly unsatisfying conclusion. The scenes are exciting, but the story never gelled.

I saw this on the way to work today. 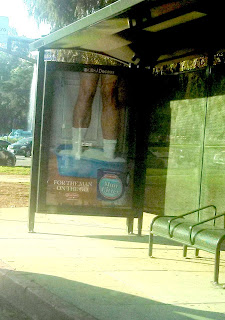 It seems there is a new product on the market called Man Litter... For the man on the go. 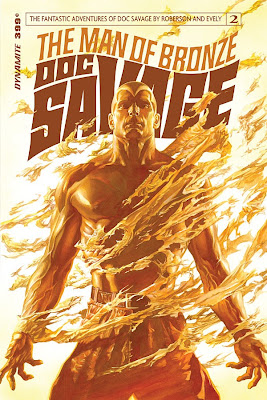 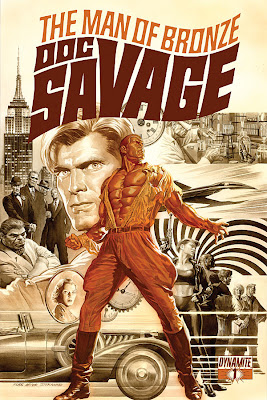 Doc Savage Comic Books are on the way. Again. Doc has appeared in may comic book series, most recently in well meant, but not well received run from DC. Doc first appeared in comics in the 1940s from Street and Smith. Following that were runs in Gold Key, Marvel, DC, Millennium, Dark Horse, and DC again.
Now, at Baltimore Comic-Con this weekend, Dynamite Comics, in an announcement that shouldn't have shocked anyone who likes pulp comics, announced at least one Doc Savage comic book series starting in Dec 2013. (I say at least one because in the past Dynamite has run multiple series featuring the same character at the same time. These Dynamite comics will feature new stories with the Man of Bronze. The ambitious series will bw written by Chris Roberson (his last name coincidentally only an 'r' away from the original series house author name Robeson) will start with a story that takes Doc from 1933 to the present. Roberson was previously the writer of the Shadow and the multi-pulp-hero series Masks for Dynamite.

The series will be illustrated by Bilquis Evely, a Brazilian, and the samples on her page on deviant art.com look very good. I wonder if she is the first woman to illustrate Doc. The covers will be by Dynamite pulp regular, Alex Ross, and the ones for the first couple of issues (seen above) look great. Below you can see some spectacular samples of Bilquis Evely's art from her deviantart page: 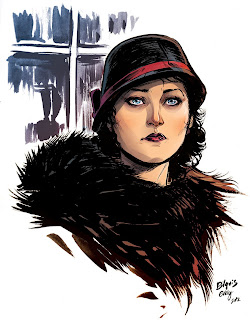 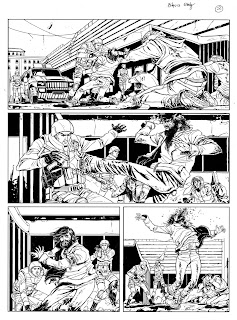 Here are some snippets from an interview with writer Chris Roberson posted on CBRnews:

What does it mean to you to be a part of this character's history?
Roberson: ... Growing up in the '70s, it was impossible to miss the ubiquitous Bantam reprints with those amazing James Bama covers. I started reading the novels when I was still in middle school, if I recall correctly, and Doc quickly became (and remains!) my absolute favorite of the bunch.

Tell us a bit about the story you have planned for Doc Savage. Who are the major players and what kicks things off to start your series?
This is a big story that we're telling in these first eight issues, starting in 1933 at the point where readers were first introduced to Doc Savage, and continuing on through the years to the present day. Just because the Doc Savage Magazine ended publication in the late '40s didn't mean that Doc's adventures ended there.

Doc Savage has had many incarnations over the years. How did you walk that balance of combining the classic character that fans love with your own, unique spin on him?
I've been extraordinarily lucky in my brief comics career, in that I've now gotten the chance to work on virtually every character and concept that meant the most to me growing up. And I'm approaching Doc Savage the same way I approached all the others. Not by worrying about new readers or old readers, per se, but by taking the core elements of the character that appealed most to me when I first encountered him, and then using those as the foundation for telling the kind of story that I would most like to read.

A new ongoing series for Doc Savage opens up a lot of potential for unexplored aspects of the character and his mythology. What are some pieces of that unexplored territory that you hope to bring to light during your run?
Understandably, many readers over the years have found the whole idea of the "Crime College" a little troubling. And that's something that we're going to be exploring.

Why do you think Doc Savage as a character has managed to endure throughout the years? What do you feel is his biggest strength when it comes to character?
… You can see elements of him in Superman, Batman, and the Fantastic Four, but he also arguably was a big influence on characters like Indiana Jones and James Bond. I think one of the most appealing aspects of Doc Savage is that, in him, we get to see those kinds of adventure hero elements in their original form, stripped down and lean, without encumbering mythologies and continuities. And speaking only as a reader, those original adventures are just so much fun that it's impossible not to revisit them over and over again. Our hope with this new comic is to try to communicate some of that fun and appeal to contemporary readers.

I am cautiously optimistic. Thanks to the ever-on-it Coming Attractions for bringing this news to my attention. They provide a weekly update of upcoming pulp goodness.

Posted by Pete Miller at 4:15 PM No comments:

Pulp of the Week - The Astounding, The Amazing, and The Unknown 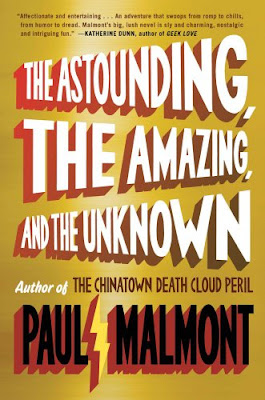 The Astounding, The Amazing, and The Unknown
by Paul Malmont


Following up on the terrific Chinatown Deathcloud Peril (CDP), Paul Malmont has written an equally good, if not better novel with The Astounding, The Amazing, and The Unknown. In CDP, Malmont wrote a story about 1930s pulp magazine writers having a pulp magazine style adventure. The results were wonderful as real writers Lester Dent, Walter Gibson and L Ron Hubbard faced grave danger.

In The Astounding, The Amazing, and The Unknown (AAU), Malmont continues in the same alternate history universe, but this time focuses on the science fiction writers having a science fiction adventure. The main characters are Bob Heinlein, L. Sprague de Camp, Isaac Asimov, along with the returning Ron Hubbard, Walter Gibson, Lester Dent and their wives and girlfriends. The setting is New York, Philadelphia, and the surrounding area late in WWII.
As in real life, in the AAU, Heinlein is running a think tank at the Philadelphia Navy Shipyard. This group is composed of a mess of scientist SF writers that are assigned to dream up the future of warfare. They have some crazy ideas and some of them even work. I hate to go into too much detail, because with a book like this, discovery is half the fun. Everyone gets the chance to be a hero and everyone plays a vital part, which is quite a feat with this many characters. Kudos to Mr. Malmont for achieving that delicate balance.
Needless to say, I think that AAU is a wonderful book that anyone interested in the golden age of Science Fiction or adventure stories should read. If you grew up reading SF in the post War era, you will love it. I started reading SF with Lester del Rey and Ray Bradbury and Asimov in the 1970s and I loved this book. The balance of truth and fiction is great (just enough truth to get you wondering about the rest.) We need more Malmont stories. If only he would give up the advertising game and write full time...
The Astounding, The Amazing, and The Unknown gets a 9 out of 10. This is a great book. Except for the tragically boring cover.

Posted by Pete Miller at 5:08 PM No comments: 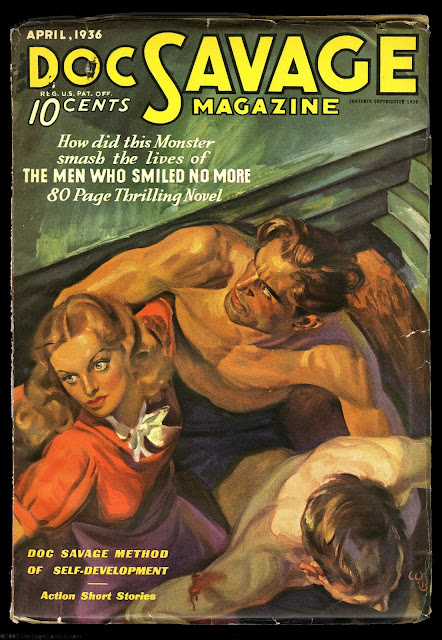 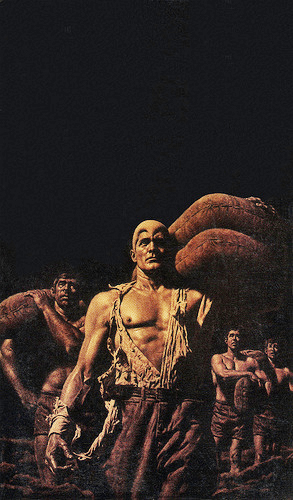 Posted by Pete Miller at 9:00 PM No comments: