Murder Mirage is one of the longer Doc Savage novels - 153 pages. The opening of this excellent novel by Laurence Donovan is classic pulp. It is the night of July 4th in Manhattan. The wind turns cold and snow begins to fall. The National Weather service calls it, "An all time mark in freakish weather." They are stymied and Doc and his team are watching with a careful eye. There is a full crew in this story - Doc, Renny, Long Tom, Johnny, Monk, Ham, and Pat Savage.

After a chase, a woman is subjected to a bizarre flash of light and then she is gone - vanished or vaporized. However, in the large plate glass window of  a music store, her dying form is frozen forever in time in the glass. The pulp cover illustrates Doc removing the image for safe keeping.

The story follows a villainous crew of Bedouins and gangsters from New York to the Middle East. The racism in this novel is more that many of the others and targets the middle easterner with some nasty stereotypes that haven't necessarily disappeared from popular fiction even today.

Murder Mirage utilizes yet another airship - a needle of a thing with no gondola hanging below. This one is streamlined for speed. (Doc must have warehouses full of airships - there have been at least 3 destoyed - one only a few issues earlier) This airship makes the transatlantic flight to the Syrian back-country in the Middle East. There the crew faces grave peril and emerges victorious.

Some things that stuck out to me - the word weasel is used in two paragraphs out of three; first in this quote - "The furtive youth that had been holding his hand under his coat was getting away with the speed of a weasel." Later, "The hammer-throwing weasel put on a burst of speed."

There are several uses of the word, "ferengi" which is described to mean foreigner in Arabic. Certainly the Star Trek writers knew this...

Here is a fun sentence - "The black fog of the morning in New York could not be compared to the pall that swiftly shrouded the silver sliver."

It is also revealed that Doc and Monk have devised a synthetic lifting gas that is "nonflammable and had greater lifting power than either helium or hydrogen." Well, no wonder Doc loved his airships. 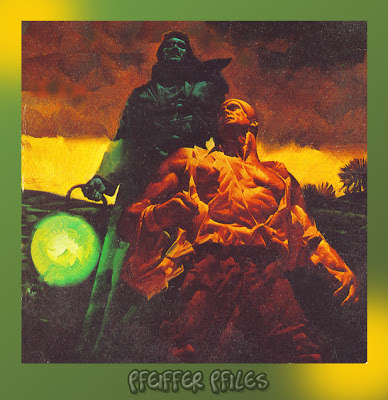 I'll give Laurence Donovan's Murder Mirage an 8.5 out of 10 for the great opening and an exciting finish. The Pulp cover is by Walter Baumhofer and the Bantam Paperback (#71) is a wonderfully moody piece by Fred Pfeifer.

Posted by Pete Miller at 5:49 PM No comments:

Pulp of the Week - The Burning Hand

The second Lobster Johnson graphic novel is out in one volume and it is a good one. Set concurrently with my own "The Horn," in 1932, this book sees mobsters in New York pitted against the Lobster and his crew.

However, since this is the Hellboy universe, it is not that easy and the gangsters have some unusual help. Throw in a plucky reporter and a mess of bullets and you get a pile of fun.

Gangster Arnie Wald is looking to make a killing in real estate by killing. All is going fine with his "haunted Indian burial ground" scheme until the Lobster steps in and reporter Cindy Tynan starts digging around. When the 'Indians' turn out to be gangsters, Wald brings in some help. Some 'Weird Tales' kind of help. Well, this being a Mignola universe story, you had to know that was coming.

There is some major mayhem and a bit of tragedy as the story unfolds. I really dig these Lobster Johnson stories. They have the perfect blend of horror, macabre, character, and pulp action.

I am pleased as can be with the New Pulp action in comics and books that is happening. There is more New Pulp than I can afford at this point, so I can pick and choose - but that is the topic of a future article.

Buy all things Lobster! Support New Pulp in comics and in prose.

For this review I read The Burning Hand trade paperback. The story is by Mike Mignola and John Arcudi. The Art is by Tonci Zonjic and the color is by Dave Stewart.

Posted by Pete Miller at 3:23 PM No comments:

Pulp of the week - Wonderstruck 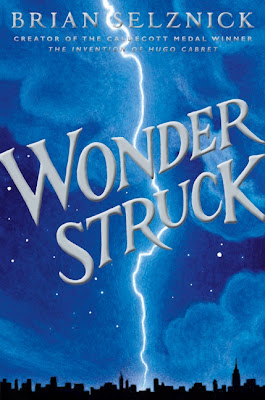 The beautiful Wonderstruck is written and illustrated by Brian Selznick in the same style as his brilliant The Invention of Hugo Cabret. Wonder Struck ties together museums, silent films, wolves, loneliness, and dioramas with charm, grace and heart.

The tales follows two stories - one in the 1920's and one that is contemporary. In the modern story a boy from Michigan travels to New York searching for the secrets of his past and his identity. He soon finds that a Wolf Diorama in the New York Natural History Museum holds to the key to his identity. 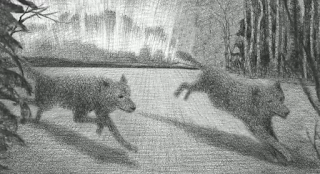 In the past, the daughter of a flapper is struggling with similar issues and soon the two stories seems locked on a collision course. 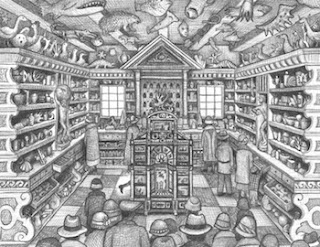 The prose is lovely and the story touching. The art is, like in Hugo, sublime. It is the intersection of the two and the placement of the art pages with the text that makes Selznick's work so wonderfully compelling. At times the tension is so tight that you blast through the art and soak in the images eager to see what that next page turn will bring. The control Selznick has with the pacing, by controlling the reader with the art when needed and the text to slow down, to add detail, is brilliant.

Selznick seems to pick topics that I love (natural history museums and the early days of cinema) so I am sure that adds to my joy, but I think it would be the rare reader that would not be charmed by Wonder Struck.

I'll give Wonder Struck a 9 out of 10. This is another brilliant book.
Posted by Pete Miller at 3:45 PM No comments: 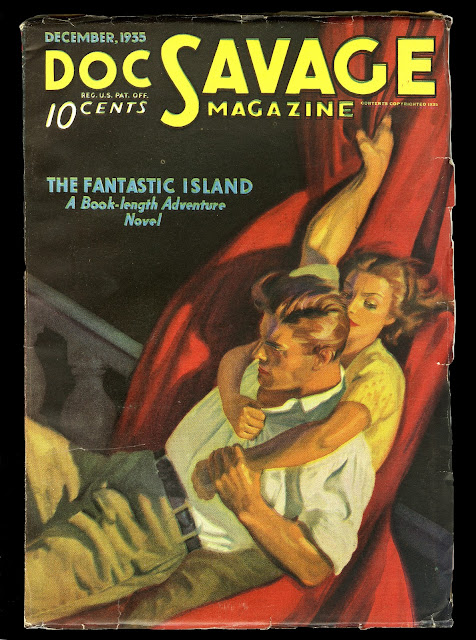 Hey kids, it's that time of year again. Though I skipped last year, this year I am writing a novel from beginning to end in a month as part of the National Novel Writing Month (NaNoWriMo) event. The goal is to write a 50,000+ word novel in the month of November. That's an average of 1666 words per day.

I'm doing OK considering I didn't write much the first day. I am only about 600 words behind.

Shocking Announcement 1 - I am not writing pulp.
S. A. 2 - I have no outline. I wrote up a bunch of character bios and did some world building and figured out a basic plot. This is seat of the pants writing.

The book is called B.O.T. and guess what? Yep, it's about big (15-20 foot) fighting robots. Well, they're not really robots, they're more like two legged tanks, with a pilot at the controls. The world is kinda a cross between Mad Max and VOTOMS.

Free copy of the book (when finished) to the person who can correctly name the full, unabreviated title of the book.
Posted by Pete Miller at 9:40 PM No comments: