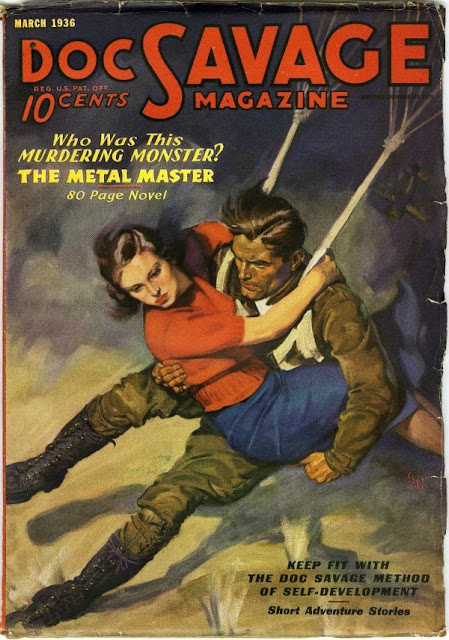 Bring on the super-science! There are no charlatans here, this stuff is all real. This supersaga begins with a young woman escorting an old man to Doc Savage's 86th floor office. The woman, Nan Tester, thinks that Seevers is a bit nuts, but she'd like to meet Savage and see if his reputation is accurate. When they get to the office, they are attacked and Seevers is taken, but Doc gets the girl and hides her in a secret room in his laboratory. Doc pursues Seevers and when he finds him it is too late. He is partially protruding from a blob of metal that used to be a car.

A gang has gotten their mitts on a a piece of gear that causes metal to liquify while it is exposed to the beam. Not good if you are in a car, for instance. The leader of this gang is, of course, The Metal Master.

In one section, Nan Tester asks Doc about the fights between Monk and Ham. He explains, "Years ago, it became evident that the only thing that will stop Monk and Ham from quarreling is for one of the other to get killed."
Nan replies, "Oh! Then they've been like this on other occasions?"
"On practically all other occasions," Doc explained.

There is a lot of good in this Lester Dent book, and really only one fault. They bring back the monkey. Yep, Ham Brook's pet ape returns, just when its seems that we forgot about him. Oh, well, it was good while it lasted. The story explains that Chemistry was quarantined for many months in with customs…

After some globetrotting and gun play, the secrets of the Metal Master are revealed. Oh, and a decent twist plays out for a good bit before being revealed. 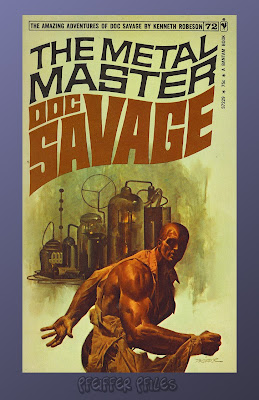 I'll give The Metal Master a 7.5 out of 10 due to a few sections where Dent was on autopilot and the monkey. Everything to do with the melting of metal is pretty great. The Pulp cover is by Walter Baumhofer and the Bantam Cover is by Fred Pfeifer.

Posted by Pete Miller at 3:20 PM No comments: