Coming Soon - Vote for the next Clark Tyler Cover and win the book!

I am putting the finishing touches on the next Clark Tyler adventure - a massive revision of a story I originally wrote for the terrific Airship 27 Productions. The changes that include adding Clark Tyler to the story and changing out the other main character. It's a tale of old Hollywood...

However, here is my dilemma... I have 2 amazing Mike Fyles covers for this one and I can't decide which one is best - so that is where you come in.

Look at the two covers that are posted here and leave a vote in the comments. I will choose two people to win a free copy of the printed book when it is out (soonish). One of the winners will be chosen from those who voted for the final cover choice. The other winner will be chosen randomly from all of those voting. I will not necessarily choose the cover with the most votes... 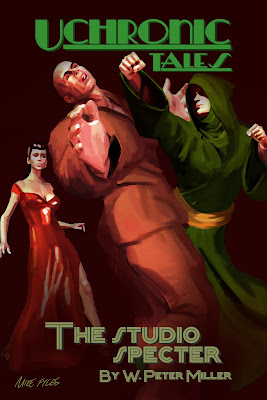 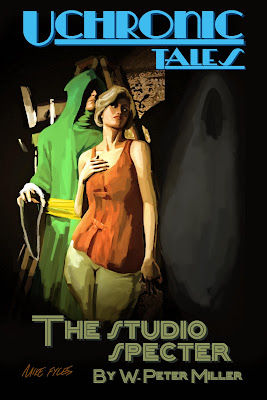 Please, add a comment to help me decide. I think they are both great. In two weeks I will name the winning cover and the winners!

8.28 - I took Andrew Salmon's suggestion and made the Jade Monk and Thug bigger in the Action version...

8.28 later - M.D. Jackson had a different idea for the action cover so I have changed that, cause I like it better than the original...

The great news site Table Top Gaming News has been posting pictures from Gencon and here is a bit of Tannhäuser news... If you look carefully, you can see the second Tannhäuser Novel, Operation Night Eagle, for sale on the rack shown here! 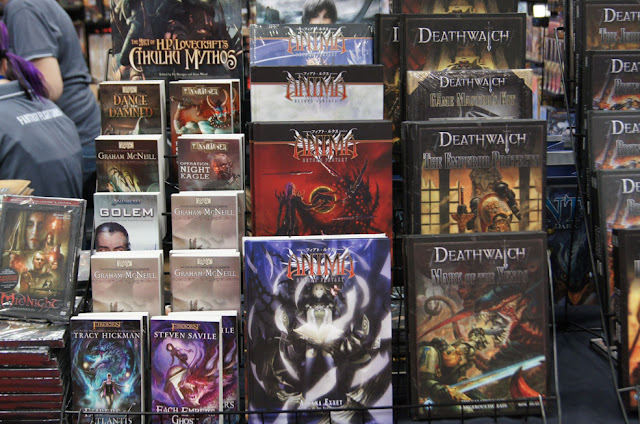 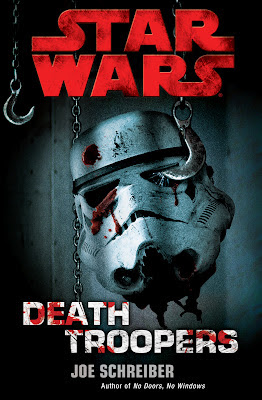 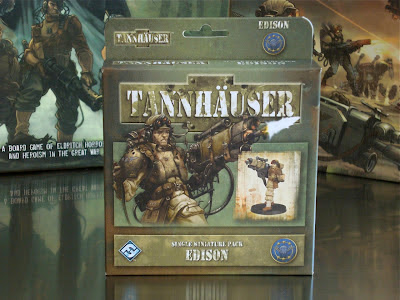 So, as it turns out, Thomas Edison's son can kick some ass. James Curtis Edison is probably the last official Union Hero and as Miah pointed out in his preview, Edison is a monster and a master of flexibility. 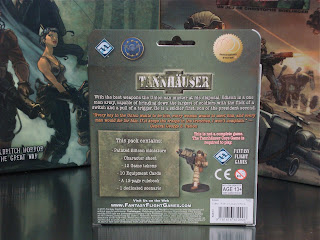 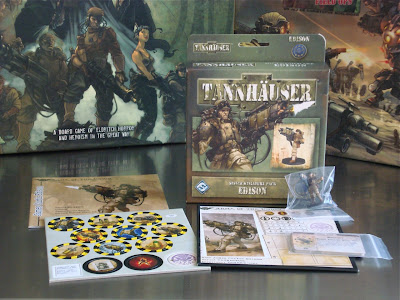 There are also some a number of tokens with rules for the use of his Menlo gun. 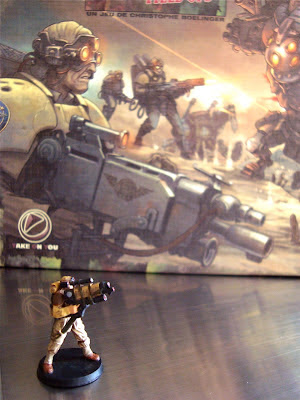 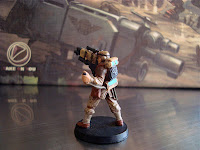 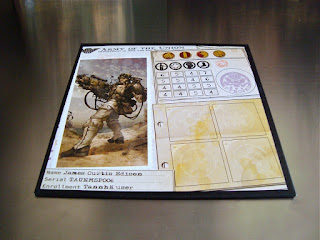 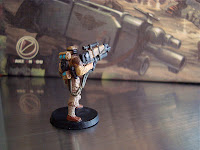 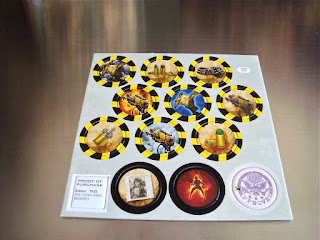 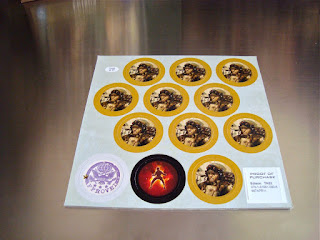 Combat Pack
Ilirium Ignighter - This shoots a ball of energy that after the initial attack does additional damage the next time that character is activated.

Gibson Shells - You choose a circle within 6 circles of Edison and all characters on that circle or within 2 circles of it take 2 automatic damage.

BG-450 - All wounds to Edison can be negated if he rolls any Natural 10s on his shock roll.


Command Pack
Ilirium Walljack - a mine that you can leave on any circle on your path. Later, you can set off the mine at any time, even interrupting a character's activation. Follows grenade rules.

America's Favorite Son - If there is a friendly Trooper on your path, they can take a hit aimed at Edison. 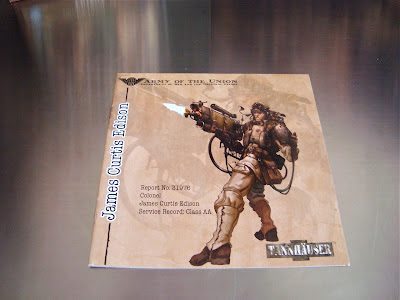 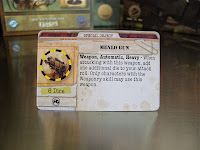 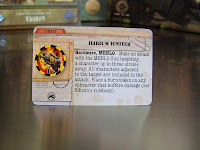 Well, here is the last official Union Hero and while that is sad, he is cool and maybe there will be future developments if the novels are wildly popular or if someone at FFG just decides that more needs to be done with the path- finding system. 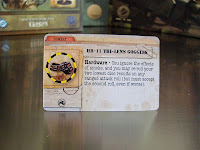 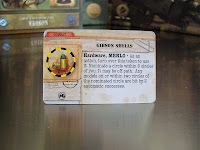 Our friend and hero, Miah, will continue his coverage of the game and his blog is the best source for news and new custom tokens and characters for Tannhäuser. 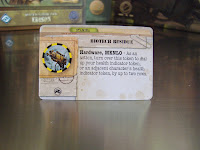 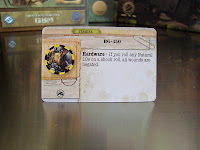 I don't know what my Tannhäuser output will be, but there are other shiny object that will catch my eye and I will continue to provide game related content on this site in addition to Pulp and book reviews. 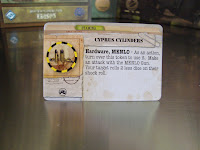 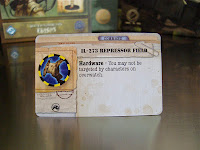 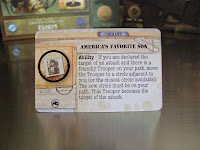 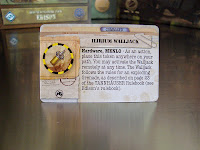 I am looking forward to Frankenstahl and I will report back then! 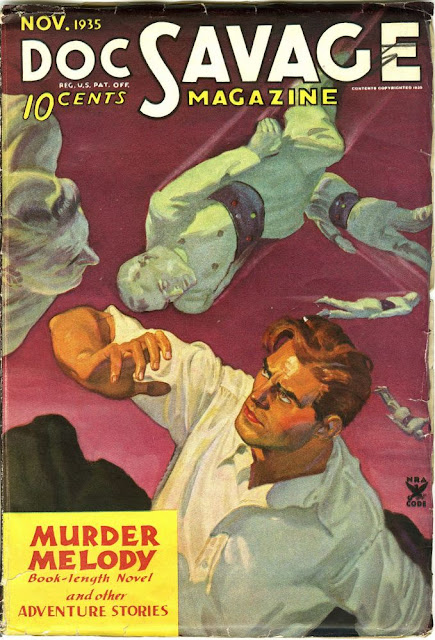 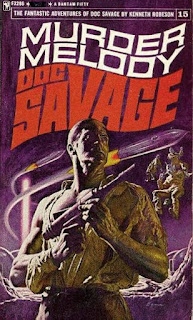 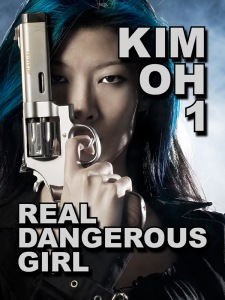 Back from vacation and ready to go...

Author K.W. Jeter is giving away the first novel in his Kim Oh series. You can find it on his blog linked here - just scroll down to the July 14th post. This first book was a fun read and left me wanting more. I will certainly be picking up the next book.

In this first story we follow Kim Oh, a young accountant who works for a less than legit operation. Her biggest thrill is when she gets to chat with a charming hitman.  Kim is a mousy young woman that takes care of her invalid brother and walks through her boring life. Her boss tells her that big changes are coming. Well, as things turn out, the big changes come and Kim isn't at all happy.

Kim takes a few rash actions and her life changes forever. To say more would be spoilerific, but what Jeter does is a fast fun action piece written first person from Kim's POV. My only grouse is that it ends too soon. That's not an expression. The book ended before I was ready to stop reading and before the big ending. I'm guessing these are a serial story, with parts 1 - 3 being the first story. That's fine because you can check out all of part 1 now for free on Kindle.

K.W. Jeter has written a number of books that I love like Glass Hammer, Death Arms, Farewell Horizontal, Dr. Adder and the Bladerunner sequel novel.

Well, K.W. is back and and writing the stories that he wants to write and publishing them himself through kindle and nook and he has been putting his fantastic back catalog up as well. Jeter is perhaps best known today as the man who coined the phrase, "Steampunk" for the kind of books that he, Tim Powers and James Blaylock were writing at the time.

I'll give Kim Oh 1 a 7 out of 10, but really just because it isn't a complete story. I suspect I'll rate the trilogy higher when I finish it.