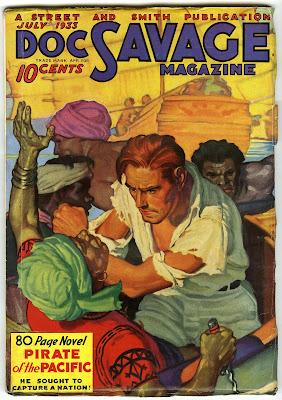 Interestingly, this is a direct, continuous sequel to the last adventure, The Polar Treasure. The first 3 chapters deal with the return of the under-the-ice submarine, the Helldiver, to Manhattan and the disposal of the treasure. The sub is attacked by the pirate's men, but escapes to safety. Doc and Company head to the South China Sea where after a lot of shooting and explosions and daring escapes (along with a lot of racist references to 'slant eyes' and 'yellow skin') they prevail.

This story is packed with adventure. Gun fights, fist fights, boat chases, sword fights, and the sinking of an ocean liner. Lester Dent jams a giant mass of good old fashioned adventure into 130 lean pages. Other than the tacky references mentioned previously this is a great read.

Some of the gadgets used are bullet-proof vests, gas masks, gas bombs, and of special interest is the telewatch, a wristwatch sized remote TV receiver that Doc hooks up to a camera and transmitter that are nearby. Doc also demonstrates that he is a master of disguise.

Another item of interest is Doc explaining why he doesn't typically carry a gun. "The reasons I don't carry a gun are largely psychological. Put a gun in a man's hand and he will use it. Let him carry one and he comes to depend on it. Take it away from him and he is lost - seized with a feeling of helplessness. Therefore, since I carry no firearms, none can be taken from me to leave the resultant feeling of helplessness." 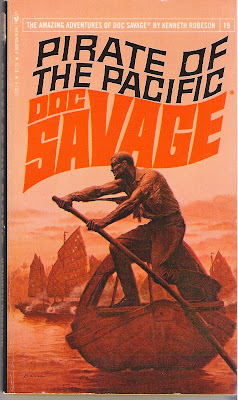 I give it an 8 out of 10. It is a product of its time and reflects the prejudices of the day. Dent was harsh on the Arctic Native people in The Polar Treasure, and on the Chinese and "Half-Castes" here. I am curious to see how other ethnicities fare in the upcoming books. He is even-handed to blacks, hispanics, and native Central Americans, so perhaps he is not too hateful of non-Europeans. I guess I will find out as I continue to read. I only have 177 books to go! Five Doc novels in three months. Perhaps I will finish faster than the 16 years they took originally publishing Doc Savage Magazine.

For this review I read my copy of the Bantam Paperback #19, 2nd Printing August 1977. This is 15 books after the previous part of the story. I'm sure I would be just as annoyed by the out of order reprint doubles.

The Bantam cover is by James Bama. The Pulp cover is by Walter Baumhofer.
Posted by Pete Miller at 11:15 PM