Pulp of the Week - The Lost City of Z 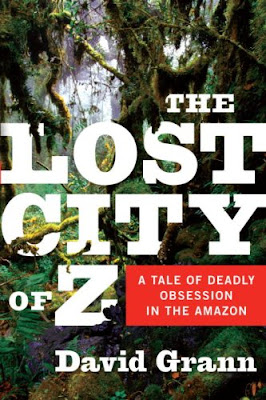 The Lost City of Z: A Tale of Deadly Obsession in the Amazon
by David Grann
Doubleday, 2009
Non-Fiction

David Grann's evocatively written "The Lost City of Z" tells the tale of Amazonian explorer Colonel Percy Harrison Fawcett and his mysterious disappearance in Brazil in 1925. That three men should disappear without a trace in the wilds of the Amazon is not surprising. But Fawcett's story is genuinely astonishing and Grann's book recounts a time of adventure with gusto and evocative detail.

Fawcett spent a lot of time in the jungle, working for the British Royal Geographic Society, most of it exploring on foot and with very small parties of men. The large boats, amphibious planes, and huge caravans were for others, Fawcett felt that staying close to the rivers, or flying above the forest canopy would cause him to miss too much and maybe miss the clue that would lead him to the lost city that he called "Z."

There were numerous tales of Golden Cities and vast riches to be found in the jungles of South America and Fawcett often found broken bits of pottery and other clues on his treks. He had an amazing constitution and rarely felt any effects in the jungle in contrast to his fellow travelers that suffered malaria, wounds infested with maggots, fevers, and often, death.

Although Fawcett portrayed himself as one, he was not a Colonel. He was a Lieutenant Colonel in the British Army. He distinguished himself numerous times in the field leading an Artillery group. He experienced the horrors of war first hand, at one point calling the battlefield, "Armageddon."

He survived the war despite being injured by a gas attack and returned a changed man, yet still determined to find "Z"

His final expedition included his son and his son's best friend. In 1925, the three of them marched into the jungle and were never seen again.

Search parties hunted for them, but they found nothing, or vanished as well. The author himself mounted an after thoroughly researching Fawcett's papers, letters, and journals.

The results of his journey are a fascinating part of the book and he finds some closure, if not Fawcett himself.

For this review I read the hardcover book and I give "The Lost City of Z" an 8.5 out of 10. The tales of the expeditions are harrowing and vivid. David Grann is to be commended for giving adventure readers (and writers) a lot to chew on.
Posted by Pete Miller at 9:21 PM

There is no getting away from it, the Fawcett story is fascinating. It's sad in a way that if the expedition returned safely without finding the Lost City of Z, Fawcett may have been forgotten, However, with their disappearance they have in a way, been immortalized, capturing the imagination of many as to what happened to them.

As to David Grann's book, yes it was well written and kept me turning the pages, although I did flip past some of the Grann parts as I thought there was just too much about Grann's personal expedition into the jungle, that to me got in the way of the what should have been the main Fawcett story.
The payoff of what grann's reports as the possible Lost City of Z is not believable to me, but that is my personal opinion.
I want to read a book that ctually discovers the Lost City of Z. I want to find out out exactly what the lights that never went out were. Something that Grann doesn't achieve in his book. But all may not, like the City of Z, be lost, as a new book called Amazon Adventure by Ben Hammott is due for release shortly. http://www.fawcettadventure.com (Fiction) The book actually continues Fawcett's journey into the jungle from Dead Horse Camp, Fawcett's last known possession, to reach the Lost City and to go inside. If handle well it should be a good read. I have read Hammott's previous book, Lost Tomb of the Knights Templar. It about solving clues in an old church to find some 2000 year old artefacts, chests of gold and a tomb with a mummified corpse. It was one of my best reads of 2009, so I have no doubt that Amazon Adventure will do the story justice. (http://www.benhammott.com)