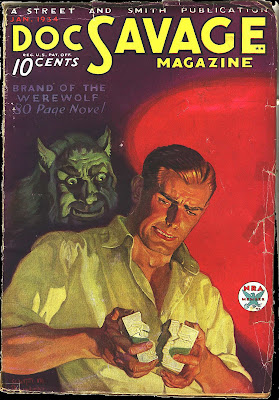 The major impact of this eleventh outing of Doc Savage and his band of adventurers is the introduction of Patricia Savage, Doc's cousin. Her father, Alex Savage, according to Doc, "He is an Uncle. I have never met either him or his daughter... Age about 18."
It is never said, but given that his last name is Savage, this uncle must be Clark Savage, Sr's brother. The words, "an Uncle" bring to mind the probability that Doc had other uncles. Interestingly, the Bantam back cover refers to Doc "Seeking to avenge his brother's murder," which is obviously not true. We can surmise that Alex Savage is Doc's father's brother, but not Doc's brother.

Pat Savage is described by Lester Dent as. "She had a wealth of bronze hair -- hair very closely akin in hue to that of Doc Savage... She was tall; her form was molded along lines that left nothing to be desired. Her features were as perfect as though a magazine-cover artist had designed them."

Pat is also wearing a six-shooter on her hip and carrying a rifle when we meet her. She is young, impetuous, and beautiful. Sounds like a great girl.

In this tale it is also stated that Doc Savage does not kill, although actions often lead to the villains falling victim to their own traps. This is in spite of the dozens of killings in earlier novels. The rapid-firers shoot mercy bullets exclusively, though it is stated they could kill at short range.

In the paperback, the words clue and clew are used interchangeably and I wonder if that is true to the original text or just a Bantam typesetter's doing. "Clew" is actually the preferred spelling (as of my 1986 dictionary).

In the story, the public is starting to know who Doc is and he really doesn't like the Hero Worship that some exhibit. The five aids really have become really defined. The Vest of Many Pockets is now in full use. 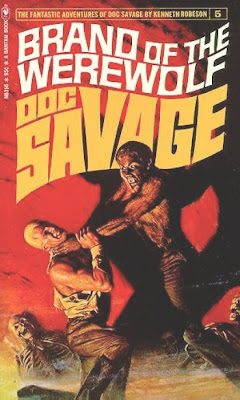 I read my Bantam Paperback, published April 1965, eighth printing, and give this one a 7 out of 10. While it was nice to meet Pat, the story said nothing about Doc's uncle, Alex Savage, and I was quite unsatisfied with the resolution of the story. "The Brand of the Werewolf" was Bantam's best selling Doc reprint with over 185,000 copies printed.

The Bantam cover is by Mort Kunstler and the pulp cover is by Walter Baumhofer.
Posted by Pete Miller at 9:03 PM