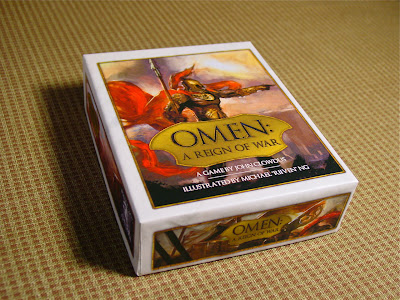 It has been a while since I featured independent game designer John Clowdus, and his company, Small Box Games, but his new game, Omen: A Reign of War, looked so good I had to get my hands on a copy. I just got the game yesterday and I had to get some pictures up right away. The artwork for the game is by Michael "Riiven" Ng.
The reviews are coming in, and they are good. Matt Drake, in a glowing review said, "the best all-around game play Small Box Games has released so far."
Men With Dice's Scott B says, "In short – with Omen, Small Box Games has a winner on its hands, one that will have no problem hitting the table regularly and often."
There is also a video review by Marcowargamer on Youtube.
I have not had the chance to play yet, but I'll say this - the art and design work in this game is as good as I have seen. The rules are clear and well laid out and the artwork by Riiven is nothing short of fantastic. I am not a big fantasy fan, but these paintings are stunning and fit the theme of the game well.
Omen is a two player game where the players take on the roles of half god brothers competing for Zeus' favor. The goal of the game is to score points (represented by  gold coins) by winning battles in the cities to collect reward cards, and to complete the challenges presented
by the gods to gain feat cards.
The gold coins are functional, composite tokens and Small Box Games has also included stickers, but I may upgrade them with something more thematic and metal.
One thing to bear in mind as you look at the pictures is to remember that the box is only
slightly bigger than two decks of full size cards. This is a compact game, but it is packed with strategy.
I took the opportunity to ask the game's designer a few questions and he also gives a little peek into the game's future.

Savage Tales - You have sold quite a few games through your company Small Box Games. Which ones have been the most successful and which ones are you most fond of?


John Clowdus - Irondale is one of my favorite designs.  It’s also been our top selling game the past year.  A Lone Banner has been pretty popular too, and I’m pretty proud of that one as well, mainly for how streamlined it is.  With the treatment that Omen received in comparison to my other designs, you can tell that that’s the game I’m most fond of.
Do you have any other publishing news that you want to tell us about?

Seii Taishogun is slated to be published by
Z-Man Games sometime this year.  I’m hoping that Sweet Teeth, a  kid’s card game, ends up getting picked up this year as well.  Things are going pretty good with that one, but nothing’s final till it’s final, ya know?

Omen: A Reign of War is your newest game. How much time has passed from the first ideas until now, when the game is released?

I’d had the idea for Omen bouncing around in my head for a while. I’d been putting it off because of the scope and art require- ments of the game. It needed to be

stylistically different from our other games to make it work.  Finding an artist had been difficult, so it was just sort of on the back burner.
Your previous games have a nice, clean, design sense. This time you went with a completely different look, with painted art. When did and how did you decide that you wanted to do something that didn't match the look established in your line of games?


I stumbled onto Michael on a Magic the Gathering website.  I liked his style, and took a chance and shot him a pm.  We hit it off from the start, and everything just sort of came together.  I wanted to give him as much creative control as possible, so I sent him brief descriptions of what I was wanting for each art, and he just went to town. Most of the time, totally blowing my initial idea out of the water with what he brought me.  Not a bad “blow out of the water,” at all.
The production values of this game are really nice. The cards feel great in the hand, and the art is fantastic. At what phase of production did you find Riiven? How much description did you give him and did seeing the art change the design of the game?

I already had the unit abilities in mind when I sent him the ideas, but one thing that was initially included ended up getting dropped.  Initially, all of the soldiers were affiliated with one of the six gods represented in the game.


That ended up getting cut from the end game, but you can still see similarities in abilities and art for the pairs of soldiers that belonged to the same god.
Omen is designed for two players. Do you have plans to expand the game for 4 players or to create any other kind of expansion?

In the end, Omen will have a total of 40 units to choose from.  16 units (8 additional Soldiers, 4 additional Beasts, and 4 additional Oracles) will be released in an expansion.


With that number of units available, 4 players will be able to make 4 separate decks using the deck building rules, and will be able to game together in a mini Swiss tournament.
Of course, that really depends on how successful the base game is.  Things are going well now.  Our hope is that interest will be high enough that each player will want to purchase his own copy of the game, and be able to build his own deck to play against other players who have done the same thing, hopefully making a tournament

environment possible.  But, that’s a long ways off.  We’re just trying to keep the game in the forefront, and hope that it keeps getting the positive buzz it’s been receiving.
Is there anything else you'd like the readers to know about this or any other upcoming games?

Just check us out if you haven’t already.

We’ve got a pretty varied catalog of available titles, all relatively inexpensive.  We’ve pretty much got something for every gamer or game group, and we’d love for you to give us a shot!
Thanks, John for taking the time out of your day to fill us in on what's happening at Small Box Games.