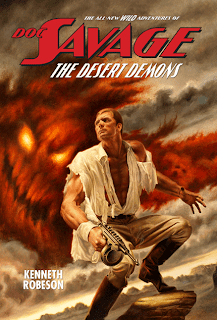 Altus Press has announced the publication of the first new authorized Doc Savage novels in nearly 20 years. From their press announcement:
The Wild Adventures of Doc Savage is a continuation of the well-received Doc novels Murray wrote for Bantam Books back in the 1990s, along with the late Lester Dent. The posthumous collaborations will be published under time-honored byline, Kenneth Robeson.
“These new novels are kicked-up, over-the-top exploits of the Man of Bronze, pitting him against forces and foes never before encountered,” promises Murray. “This is not some comic book scripter’s concept of Doc Savage. It’s the real deal.”
Fully authorized by Condé Nast, trademark holder of Doc Savage and based upon unpublished outlines and manuscripts originally written by Lester Dent, the originating writer of the seminal Street & Smith superman, and licensed from the Heirs of Norma Dent, The Wild Adventures of Doc Savage begins with a searing story set in the summer of 1936, The Desert Demons!
Murray then took a bit of a swing at some of the Doc products released of late (I'm guessing this is aimed at the DC Comics' First Wave series) and proclaimed:
“Since I wrote my last Bantam Books Doc,” Murray commented, “a lot of writers have taken a swing at the bronze man, and struck out. It was painful to watch. So Lester Dent and I have come out of semi-retirement to show everyone how Doc Savage is done. With the recent release of Python Isle, the first of my original seven Doc novels to be released as audiobooks by Radioarchives.com, I’m proclaiming this the Summer of Doc Savage. Doc is back. For real this time.”
Murray also reunites with his other Doc Savage collaborator, award-winning artist and sculptor Joe DeVito, who will paint the covers from never-seen photographs of model Steve Holland, who posed for the best-selling James Bama covers as the living embodiment of the Man of Bronze. These vintage photos were donated to the project by Mr. Bama.
DeVito notes, “Working with Doc Savage again might best be described as revisiting old friends: both figuratively and literally. Collaborating with Will Murray, working from classic photos of the late Steve Holland provided by Jim Bama to illustrate the first super hero of them all… I guess I can also describe it as FUN!”
The Desert Demons will be released in July, followed by a second wild exploit, Horror In Gold, by late summer. Seven new novels are planned. Murray promises the familiar characters in their rightful time period, but with a definite edge to them.
The books will be released in trade paperback, signed hardcover, and ebooks for all readers. I think that the ebook format is perfect for New Pulp since pulp is meant to be read, not necessarily set on a shelf.
You can also visit Adventures in Bronze for much additional information.
This info is a bit old - 65 hour work weeks have cut into my blogging time. However - I will have Comic-Con reports coming up and Gen Con reports after that, so stay tuned!
.
.
Posted by Pete Miller at 10:41 PM

Collected Will's previous 7 Doc Savage adventures published from '91 to '93, lot of fun reading them. Just received "Desert Demons", can't wait for the other new "Wild Adventures" from Will and hope the prospects for more are bright.