Pulp Film of the Week - Prometheus


Warning - Spoilers abound in this post. Unlike my usual spoiler-lite fare, this one is spoilery and thus, if you have not seen Prometheus and have any intention of doing so... 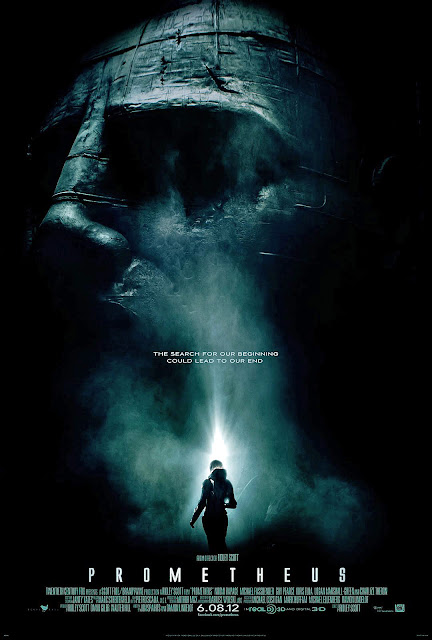 The events of this evening have taken my thoughts back to a day long ago in 1979 at a movie theater in Ohio where I sat with a friend, Ken. We were there to see the new film by the director of "The Duellists." It was a science fiction film, and since I loved "The Duellists" and I love science fiction, Ken and I were there to see a movie called, "Alien." I knew virtually nothing about that film going in other than, "In Space No One Can Hear You Scream," the tag line on the poster.

Needless to say, the events in "Alien" shocked and astounded and delighted us so much that 2 years later, when we heard that there was a teaser trailer for Ridley Scott's "Bladerunner" showing at a nearby theater, we talked our way in just to see the trailer, which was great. A science fiction hard-boiled detective film. I was all in, and it turned out to be my favorite movie. It still is.

Which brings us to 30 years after Alien and Ridley Scott's third science fiction film - a return to the Alien universe - called "Prometheus." The film is full of big ideas and intriguing events and it wants desperately to amaze and astound us, but it kinda doesn't. We know by now what these creatures do. It is sort of fun to see where the elements that make up the Alien universe came from, but there are only a moment or two that are "Wow" moments. The mysteries were better left that. The alien pilot or navigator for instance - do we really need to know exactly who he was and how he came to be split open in that weird chair and that he was a proto human from long ago. One of the people that seeded the galaxy? The events surrounding Peter Weyland's crusade and death are some of the most interesting parts of the film, but if he is an old man in every scene, why was a young actor put in make up? Why not cast an elderly actor? In the end, the whole adventure and resulting series all the results of a dying old man trying to stave off that death.

The acting is excellent, the design and execution of the effects and visuals fantastic, but the film was flat for me. I can never know what it would be like to see this film having never seen another Alien movie, but it would probably be pretty cool. Unfortunately, I don't think there are many people that will see this as their first foray into the Alien universe.

Ridley Scott is my favorite director and maybe I have too much history with this series. There are many good things in "Prometheus," but I just can't shake the hollow feeling. This is the movie that answers the question of where did that horseshoe shaped ship come from and who were the pilots?" There is nothing wrong with the answer or in the telling, but I'm just not sure we needed to know. And it just lay there for me.

Your mileage may vary. I am hoping that the return to the Bladerunner universe fares better. The sequel books by KW Jeter were quite good, but I would be surprised if they are drawn from.