Pulp of the Week - Dark Light 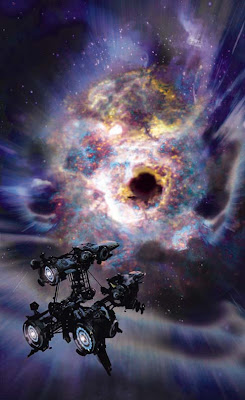 
Ken MacLeod writes semi-political, high concept, deep SF. In other words, his novels are rich in characters, full of deep, cosmic ideas, and simmering with political situations that have no easy answers.

In Dark Light, published in 2002, The Cairns family that we met in Cosmonaut Keep has achieved a first for humans -- they built a starship. What would they do with an interstellar ship? Pay visit to a god and throw the planet of Croatan into chaos and revolution.

Besides a local human population that seems to be living in 1970s technology (notwithstanding the starship traffic), Croatan is also home to an indigenous population of people that live in a mountain valley near the port city. The port city dwellers are contending with pollution and labor unions and a semi-corrupt government. All their factions are living an unsteady, unwritten truce between themselves and the population living in the wilds.

Rather than relay the intricate plot, I will highlight a few of the thoughts and concepts the brilliant book brings to mind. The native people think of gender in two ways - the equipment between one's legs and the activity, demeanor, and dress of a person. But in their society, the latter is the dominant determining factor. The Cairn ship, Bright Star, causes revolutionary changes merely because of it's existance. It is the first non-saur starship. The immortal Cosmonauts are handled really well, drifting in and out of others people's lives, never aging, but watching others age. They are ideal star travellers. MacLeod also writes the characters astoundingly well.

This is a great science fiction book in all regards and I highly recommend it. I'll give it a 9 out of 10. The covers for this series are by Stephen Martiniere and are spectacular. The last of the series, Engine City, has my favorite of the three.