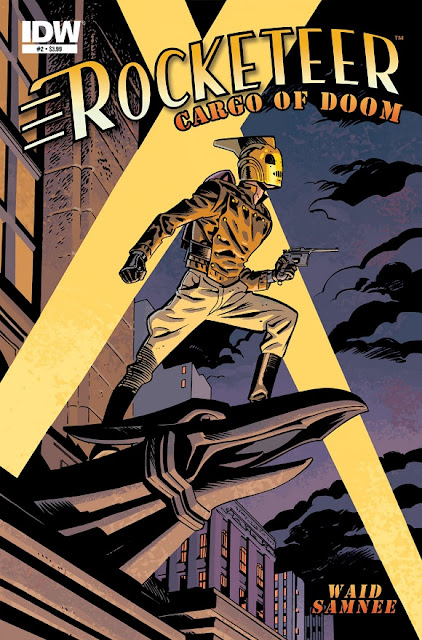 There are a lot off cool things in this miniseries. For one, Cargo of Doom remembers just who made the rocketpack. Though it never said outright in the comic,  it was changed for the movie. In the great Joe Johnston film the inventor was Howard Hughes - a clever substitution for the one in the Dave Steven's comic - Doc Savage.

After the scene where Cliff rescues Sally, we go to a ship that is nearing Los Angeles Harbor. One of the crew (a big bullet headed guy named Duggan) asks why the Captain goes easy on one of the other men, a guy named, Guptmann. The Captain says, "...Guptmann's perpetually distracted, I know. Always struggling in his brain, like he's failing to remember something urgent. Well, that's true. But there is a reason for it. A horrifying reason. Guptmann was once captured by the Master's greatest enemy. Do you know what that entails? As he has done with so many others, the Master's enemy spirited Guptmann away to a secret laboratory—and subjected him to surgery. The Master's enemy stole vital portions of Guptmann's identity. Of his free will, his drive. He is Guptmann no longer..."

The reference to the Master is referring of course to John Sunlight and Sunlight's greatest enemy is... Doc Savage.

The story also features creatures returned from Skull Island, which, of course, go amok in Hollywood.

Mark Waid does a nice job writing this story, putting in a new character in Cliff's crew and adding a little conflict between Cliff and Betty. Chris Samnee also does good work with the art, capturing the spirit of the era, and the characters, without copying Dave Steven's style.

There is more Rocketeer to come and I am looking forward to it.