This week is a peek behind the curtain as I work on my Doc Savage Tannhäuser Custom. Here you see a shot of my garage work table. I got that blue tool box as a kid. It had a junior sized hammer, saw, and other tools. Now I use it for my hobby tools. 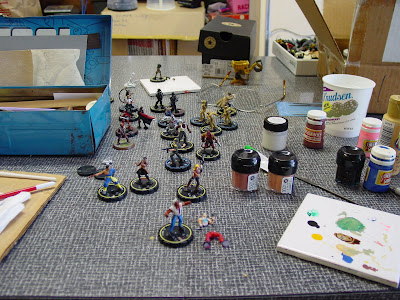 I use extra plain white tiles for my palate. When the paint dries I just scrape it off with my single edge razor blade. 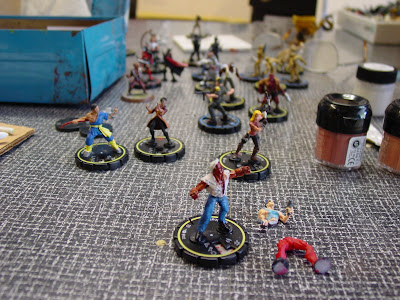 Here you can see the pieces of my Doc Savage figure (standing). I am combining two HeroClix figures. The Criminal figure is providing the legs. I have already cut the torso off the legs. It is laying behind the legs from the Doc Samson torso, arms, and head. The red Samson legs are also to the side.

I have primer painted the upper parts and painted and inked the bronze skin. I will be painting the pants and shirt different shades of tan. 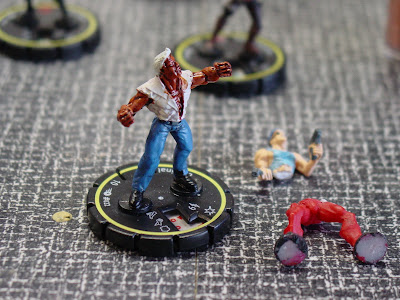 I have now added putty for Doc's trademark ripped shirt. I also carved the hair and added a widow's peak. This is the figure's current status. 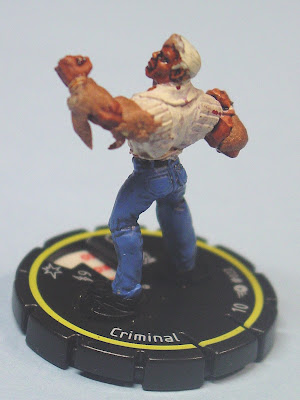 Here is my HeroScape Doc Savage. The figure is from Bob Murch's Pulp Figures. This guy is a bit short for Doc Savage, hence my HeroClix kit bashing. I will be using a similar paint scheme. 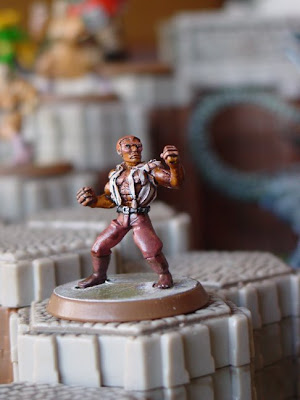 Clark Savage, Jr. was born during a storm on the Orion, a schooner anchored off the coast of Andros Island, Bahamas on November 12, 1901. From birth he was raised by his father to be a scientist and adventurer. He has followed that path his whole life, training vigorously for two hours each day to further his abilities. He is a medical doctor, a linguist, an engineer, and one of the finest pilots in the world.

Clark entered medical school at Johns Hopkins when he was 16. His schooling was interrupted when he joined the Aviation Section, Union Signal Corps in 1917. He was already a proficient pilot.

While flying a balloon busting mission, Clark is shot down and captured by Reich forces. He is sent to the Loki prison camp and befriends William Harper Littlejohn, Andrew Mayfair, Theodore Brooks, John Renwick, and Thomas Roberts. These men would become his closest friends. Three months after meeting, the men escape. 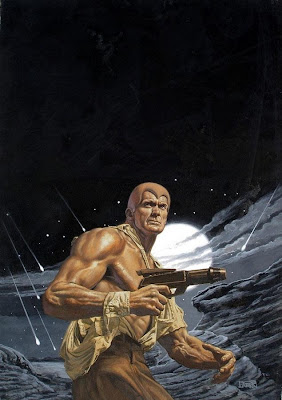 Together they perform numerous covert operations for the Union Army. Eventually, the older men convince Clark to finish medical school. Clark gets his M.D. in 1926.

While Clark is establishing his criminal rehabilitation facility in upstate New York, his father secretly finances the construction of the Empire State Building. 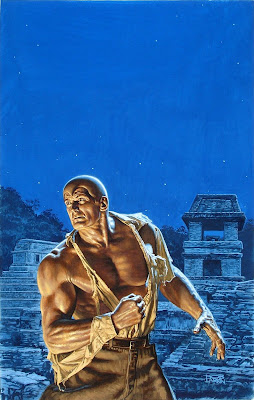 Clark and the Fabulous Five continue covert Ops for the Union. When his father is murdered, Doc discovers that his father had a secret source of funding - a massive gold mine in Central America - operated by a hidden Mayan tribe that has survived into the modern era. After meeting with the members of the tribe, Doc Savage is fully funded to wage his war on injustice.


COMBAT PACK
Super-Machine Pistol
Close Combat Weapon - Add 1 to the result of each die.
Mercy Bullets - If the target figure would be killed, instead it is knocked out. The figure is still removed from the battle, but in a campaign game or series of linked scenarios the figure may return in the next game.

STAMINA PACK
Golden Gaze
At the start of each turn you may choose one figure on the same path as Doc. Have a Mental Duel - If Doc wins you may choose if that figure loses its Movement or Action Phase this turn.

Concussion Grenade
Pushes adjacent figures 3 circles away from the grenade circle. If a figure cannot move two space on the same path, they take 1 Automatic Wound.


There you have it - the first draft of the Man of Bronze. Let me know what you think of the powers. I will be working on the character card and tokens.


My custom additions to Tannhäuser are not created by, distributed, or endorsed by Take on You, Asmodee, or Fantasy Flight. Tannhäuser and all related characters are trademarks of Take on You and © Take on You LTD. Doc Savage is trademark and © Condé Nast Publications. All Rights Reserved.
Posted by Pete Miller at 12:08 PM