Pulp of the Week - StarDoc 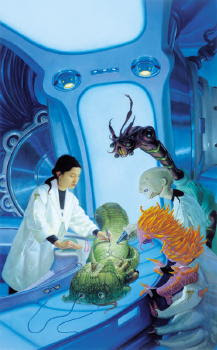 I have been reading Paperback Writer, S. L. Viehl's terrific writer's blog, for quite some time, but StarDoc is the first of her novels that I have read. I will be reading more.

StarDoc is the first book in the tales of Dr. Cherijo Grey Veil and her journey breaking away from her domineering father. Cherijo is a young Terran woman that signs on as a physician at the Free Clinic on the distant colony, Kevarzagia Two. There are few humans on KV-2, but that suits Cherijo fine. She is looking for escape more than companionship anyway. However, because of the way humans typically treat other species, other species think humans are bigoted, arrogant, jerks. Cherijo's father is the biggest jerk of all.

However, Cherijo overcomes that prejudice by being a dedicated doctor and friend to those that would have her. When a dire medical emergency threatens the entire colony, it is up to Dr. Grey Veil to come up with a solution. However, her decisions lead to personal tragedy and finally, rebirth.

S. L. Viehl writes a really good story. It is compelling, thought provoking, ingenious and touching. Her characters are vivid and real, with emotions and hidden agendas. Cherijo is put through the wringer in this book and ultimately survives a stronger, wiser person.

I liked the book quite a bit, but fault it a little for having two endings. It has the real ending, the resolution of this book. But then it has the set-up for the sequel. That section occupies the last 90 pages of a 400 page book. It just seems tacked on and given that the second book is hyped at the end of this one, it seems a bit premeditated to push sales for the next book.

On the other hand, I will probably buy the next book anyway.

According to Wikipedia, S. L. Viehl is one of the pen-names of author Sheila Lynn Kelly. Ms. Kelly has at least 4 others. She writes in a number of other genres including Urban Fantasy, Christian, and Romance. StarDoc was her first published novel. 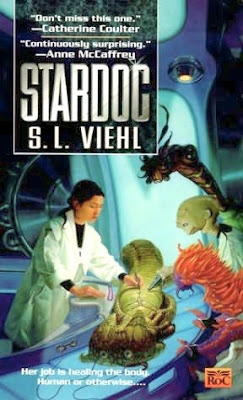 I give StarDoc an 8 out of 10. It is good space opera and I look forward to reading the next book. For this review I read the Roc first edition paperback, January, 2000. The cover art is by Donato Giancola.
Posted by Pete Miller at 12:16 AM