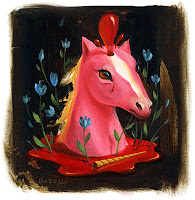 
I find it telling that 3 of the four stories first appeared online. That is good news for the short fiction market, and perhaps bad news for the print magazines. In today's hurried, always online times, it is easier and faster to find and read a short story on your phone that to find a print issue of a magazine at a store - A few months ago I went to 3 bookstores and 4 newsstands while trying to find the current issue of Asimov's. If I want to buy your magazine and can't find it anywhere, then you are in trouble.
.
.
Posted by Pete Miller at 1:10 PM

Thanks for the quick reviews and links to the stories. I enjoyed The Things as well =)

Also, I tried to look around for some artwork for the Yukio character but had no luck. Maybe you could pick up a copy of the comic(s)?

Hi Pete, have linked to this post from http://nwhyte.livejournal.com/1786958.html for comparative purposes!